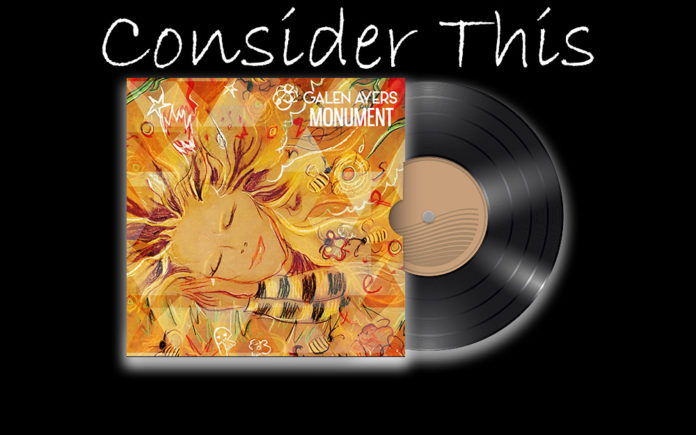 “I’m a million people, rolled into one, if you don’t know me you will know someone/I’m a long-time baby, a full-time maybe with nothing to prove, you choose.”

That’s singer-songwriter Galen Ayers making her musical declaration of independence on “You Choose,” the opening song on her solo debut, “Monument.” Galen settled on a career in music almost circuitously, despite the fact that it has always seemed part of her destiny. Her late father, Kevin Ayers, was one of the founders the British Psych-Folk band, Soft Machine. In America, the Canterbury-based five-piece is probably best known as the opening band on Jimi Hendrix’s second U.S. tour. While they achieved limited commercial success, Kevin, along with Syd Barrett, (the troubled visionary behind the original incarnation of Pink Floyd), were early masterminds of the swinging Psychedelic scene.

Kevin parted ways with the band, and by 1969, he embarked on a sporadic solo career that was occasionally self-sabotaged by his need to escape to sunnier climes.  Still, he managed to work with seminal figures like Brian Eno, John Cale, Nico and Mike Oldfield. Although his music was vastly under-appreciated, he wound up influencing a younger generation of critically acclaimed bands like the Go-Betweens, Teenage Fanclub and Trash Can Sinatras. Sadly, he passed away in 2013.

Galen grew up in Deia, near Majorca, Spain. Early on, she dabbled in music, picking up the guitar at age 13. Still, school was her priority. Initially, she studied Ethnomusicology and Religion as an undergrad, she eventually earned a double master’s degree in Religious Psychology and Buddhism. In between, she managed to collaborate with ex-Talking Heads/Tom Tom Club fun couple, Tina Weymouth and Chris Franz, as well as Punk progenitor Tom Verlaine and film director Mike Figgis. Unfortunately, these songs were never released commercially.

Her next project, Siskin, yielded bigger rewards. Pairing up with London-based musician Kristy Newton, the duo forged a songwriting partnership and began performing as KG, but they had trouble landing a recording deal. By 2008, they changed their name to Siskin, partly as an homage to the Yellow-Bellied Siskin Finch, but also a sly acknowledgement that they felt like sisters under the skin. They made some waves with the release of a melodious version of Joe Jackson’s “It’s Different For Girls.” A year later, they self-released their eponymous debut.

Unfortunately, more prosaic concerns intervened and Galen put her creative life on hold to care for her ailing Dad. In interviews she has noted, “I was his metaphorical wife, daughter, sister, best friend, advisor.” Adding caregiver to that list ensured her dad navigated the end of his life with a measure of dignity.

Once he was gone, she retreated to the Greek Island of Hydra for two years. There, she channeled her grief creatively and cathartically, writing the songs that would eventually become the basis of her record. When it came time to record, she connected with musician/producer Paul Simm, (Amy Winehouse, Groove Armada, Neneh Cherry). The result is her first official Solo collection, “Monument.”

The album opens tentatively with the aforementioned “You Choose.” Delicate acoustic arpeggios accompany hushed, diffident vocals. The opening couplet feels raw, confessional and intimate; “Do you want to hear my story? It’s about broken glass splintered in my skin/I’m a time traveler, let me explain, the future and past, it all feels the same.”

The quietude of the opening cut certainly isn’t indicative of the rest of the record. A consummate musician, Galen is something of a stylistic shapeshifter. take, “Run Baby Run,” a sly Samba powered by electric guitar riffs that crackle like lightning bolts , rippling keys and a seductive beat. The lyrics (in English and Espanol) offer up an artistic emancipation proclamation, as she insists “When you throw me a lifeline, you only tangle in mine.”

Then there’s “Collide.” Something of a slippery carpe diem, it’s shrouded in shuddery keys, sunny acoustic guitar and a kick drum beat. Here her vocals twitter and trill over the lush instrumentation as lyrics warn against ignoring your instincts; “You’ve got everything colliding underneath your skin, don’t let them convince you/If you don’t feel it It don’t mean a thing.

The best songs here, “Duet,” “Melancoholic,” “Morning Song” and “Ain’t That The Way” are the most musically adventurous cuts on the album. They also seem to explicitly focus on the loss of her father. Spector-esque drums that echo and sway give “Duet” a bit of Girl Group frisson. Thundering drums connect with angular guitar as she focuses frustration on the co-dependent nature of their relationship; “I don’t want to know what you’re feeling, it’s my life you’re stealing/I don’t want to know, you need healing, it’s my life you’re stealing, ‘cause I can’t say no.” By the end of the song, self-preservation kicks in and boundaries are set; “I wanted you to love me for myself, not because you didn’t have anyone else/I knew it was time to leave when you said without me you can’t breathe.”

Although the song’s title seems lugubrious, the melody and arrangement of “Melancoholic” is anything but. While the lyrics plumb the depths of dipsomania; “Down at the bottom of a bottle is a place I know so well, it’s called emptiness,” the music blunts the need for liquid courage. Splitting the difference between sunshiny Latin rhythms, splashy Mbanqanga guitar, Hoodoo keys and Second Line-style street parade syncopation, the tune is an infectious delight.

“Morning Song” is chugging and insistent, barb-wire guitars pinwheel and spark. Floundering through the five stages of grief she recognizes “I’m going down the wrong path again, all of these ghosts in my head, I keep them alive they keep me dead/I know I’ve got a destination, but I’ve lost my constellation, help me start over again.”

Meanwhile, “Ain’t That The Way” is a breathless torch song bathed in electronic beats spiraling acoustics riffs and shivery electric guitar. Her willowy vocals command the spotlight as she bares her soul; “Life is complicated, I miss you everyday/Sometimes when I get desperate, I want to run away.”

Other interesting songs include the heartbreak beat of “Into The Sea (Calm Down),”and the impossibly poppy “U-Turn.” The record closes with the sparkly sweet optimism of the title track. Here the lyrics look forward, but also make time to honor her complicated relationship with her father; “You and I we live underneath the same sky, you and I, it’s going to be going to be alright, cause we never said goodbye.”

As the child of an outsize personality, Galen became introspective by default. She also developed astute observational skills, a trenchant wit along with a wily, and wholly original sense of melody. With “Monument,” she emerges from her artistic chrysalis wings intact and ready to soar.