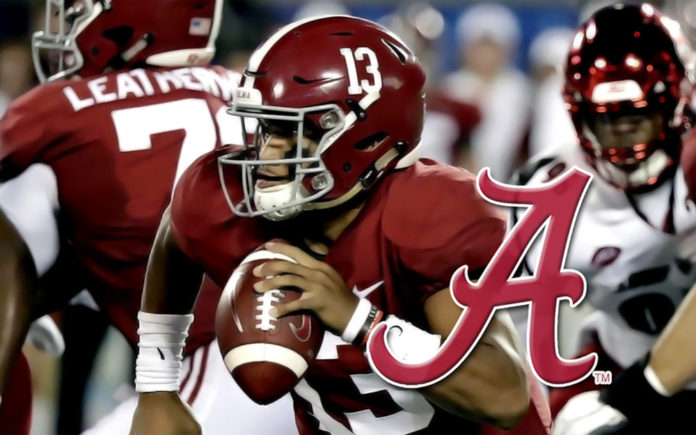 Every year, when college football returns to us, we are happy for a few hours. There are silly upsets, nonsense plays, and wild endings, and we experience the rush of watching a sport we pretend is unpredictable. And then night falls, and Alabama plays—always in a marquee national broadcast slot (because we’re supposed to want to watch Alabama), always at a neutral site, typically against a quality opponent—and we are reminded that there is no joy in this sport. Alabama lays waste to whomever they play Week 1, every year. Last year, the Tide beat Florida State by 17, dishing out a season-ending injury to FSU’s star quarterback. Two years ago, ‘Bama beat USC by 46. Under head coach Nick Saban, the Tide are 11-0 with 11 double-digit victories, six against ranked opponents. They have beaten Wisconsin, Virginia Tech, Michigan, and Clemson by three scores in season openers.

But this year’s Bama season starter against Louisville had some intrigue because of a much-debated quarterback battle. Was Nick Saban going to start Tua Tagovailoa, the dynamic lefty who won the Tide last year’s national championship after a surprise halftime substitution? Or would Saban stick with Jalen Hurts, the steadier, more experienced player who got ‘Bama to the last two national championship games? Saban refused to tip his hand. There was actually some public dissension from Hurts about the way the process was handled, a rarity at a closed-lipped place like Bama.

For me, the choice was clear: Alabama had to start Tagovailoa, whose ability to throw the deep ball and flair for the spectacular would give the typically conservative Tide a new dimension on offense.

Saturday night, Saban revealed that he would go with Tagovailoa—and dear goodness, it took about 15 minutes, and this year’s college football season became obviously predictable.

I watched this play—a play that might end the year as the season’s greatest, although maybe not even the greatest of Tagovailoa’s brief career—and mumbled at the screen, “Stick a fork in this season, It’s over!” Tagovailoa was stunning. He went 12-for-16 for 227 yards and two touchdowns while adding a rushing touchdown.

It’s not that I didn’t enjoy watching Tagovailoa play. Every time he touches the ball it’s an electric thrill. His sack escapes are the stuff of Mike ‘pre-dog fighting’ Vick; his throws are lightning bolts.

And it’s not that Saban made the wrong call. The Tide scored touchdowns on five of the six drives while Tagovailoa was quarterback, with a wide receiver fumbling on the sixth. Hurts played on four drives, which combined to result in a single field goal. Tagovailoa is the guy for the job. At this and surely the next level.

It’s that now, after years of winning championships with guys like Greg McElroy, A.J. McCarron, and Jacob Coker at quarterback, the Tide actually have the best quarterback in college football under center. What the hell are the other 128 teams supposed to do about that?

Alabama was leading 35-0 when Tagovailoa left. Just like always, they demolished their Week 1 opponent (51-14). The only difference is that instead of slowly strangling their prey, the Tide ripped their still-beating heart out from their chest and ate it.

Welcome to college football in 2018, where Alabama has a Heisman candidate at QB. Alabama will demolish their competition, the only difference between this and any other season, at least they’ll finally be fun to watch.