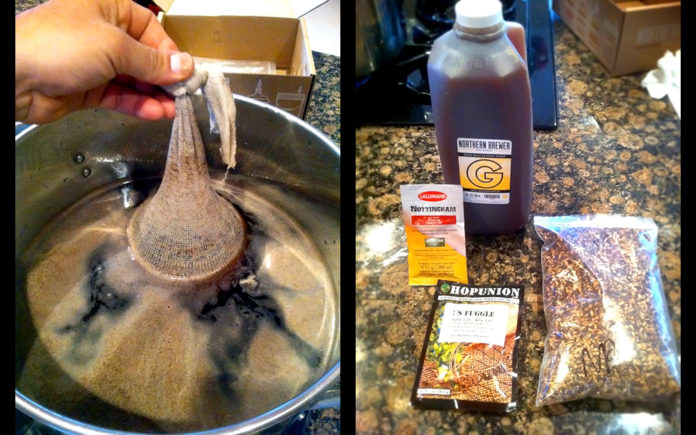 A couple of false starts aside, my brewing career didn’t officially begin until January of 2012. This wasn’t a hobby, it was an obsession. I’d order two kits of beer every month and brew them both, so that by the end of by first year, I’d created 24 batches of homebrew. Now, extract beers are fun and easy to make, but they offered no challenge towards what I was after, which was learning to make beer from malted grains. The only two extract beers I ever made were in that first month. By the time I’d ordered by next sets of kits, I was ordering ones that combined extracts with barley grains, called partial-mash kits. Partial-mash brewing is the intermediate level of home beer making, and it is way more fun than using an extract kit.

Partial-mash brewing allows you to create a much wider array of recipes than extracts alone do. Extract syrups and powders are usually just concentrated base malt. Base malts are the main building blocks of your beer recipe, and the main source of fermentable sugar. Depending on the variety of malt that your extract comes from, your beers can have a variety of bready, and cracker-like flavors. Extracts will produce amazing pilsners, blonde’s, pales, and even amber ales. But some recipes call for more depth of flavor and complexity than extracts alone will produce, and this is where you combine whole grains with extract to get a beer with the best of both worlds. 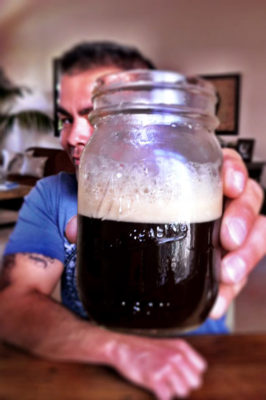 Northern Brewer is a homebrew supply store from Minnesota, and I’m pretty sure I kept the lights on at that place between 2012-2014. The first partial-mash kit I ordered from them was their English Brown Ale. It came with a quart of Maris Otter extract syrup, a few pounds of mixed character grains, a cotton bag for steeping the grains in, dry English yeast, and a packet of Fuggle hops. The first step in a partial-mash kit is to extract sugars and flavors from the grains your kit came with. Character grains are called such because their job isn’t to add fermentable sugars to your beer (although almost all character grain will add a small percentage, it’s not enough to add significant sugar), but rather, to add the different layers of complexity that you expect to find in craft beer. If you’ve ever had a great brown ale, think of all the subtle toffee, cocoa, and caramel flavors that made it so different from a pale or even amber. All those toasted, dark notes came from a variety of different barley grains that have been roasted at different temps to achieve different characteristics. Blending the right types of roasted grains together will give you a spectrum of intensity and flavor, and is really what differentiates one style of beer from another.

So, the instructions were to place the grains in the little sock-like bag, tie the end of the bag, and steep it in a pot of 152-degree water for 30 minutes, just like you would a tea bag. The trick with steeping grain is to get your water hotter than the steeping temp, because the addition of cool grains will lower the temp of the water. I got my water to 160 degrees, used a candy thermometer to check my temp, then added my bag of grains to the water and stirred. With a lid on the pot, your water should hold a temp without losing too much heat. If you do find that your temps are getting low, you can always turn the burner on low and raise your heat back up. Just be sure to check your temperatures constantly and not allow things to get too warm.

The grains that this kit came with were a mixture of caramel, biscuit, and chocolate malts. Now, none of these grains are infused with any of those things, it’s just the flavors that are contributed by those grains bring the flavors of roasted chocolate, cooked sugar, and baked biscuits to mind. After 30 minutes of steeping, the water in the pot turned a rich brown and smelled a bit like baking bread. The pot was topped up with a bit more water, the jug of extract was added, and the burner was turned to high heat. Hops were added, and the wort boiled for an hour, filling my kitchen with the uniquely intoxicating and instantly recognizable aroma of boiling wort.

When an hour was up, the entire heavy pot of beer was put in an ice bath and cooled rapidly, the wort was transferred to a fermenting vessel (in this case a big glass jug that resembles a water bottle, called a carboy), yeast was pitched, and a month later I had 50 bottles of delicious, English brown ale to drink and share with friends. The flavor reminded me of a fuller and richer Newcastle, which was one of my favorite beers at that time. I’d mastered the intermediate brewing technique of partial-mashing without a hitch, and I was one step closer to my future in the craft beer industry.