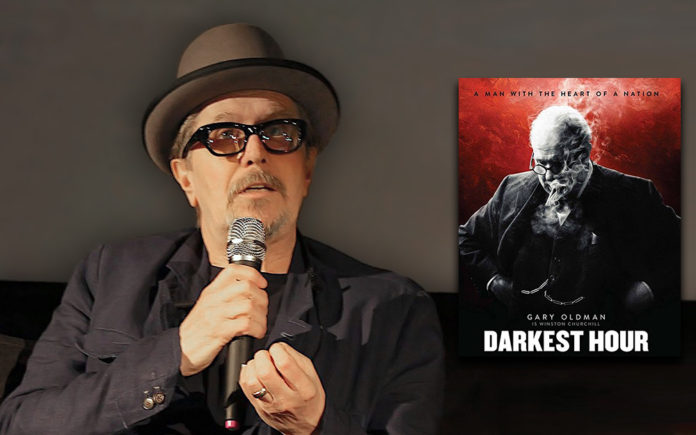 Front runner for a Best Actor Oscar© in next month’s 90th Academy Awards (March 4), Gary Oldman was a welcome and much anticipated guest at a special screening of  his acclaimed Winston Churchill biopic “THE DARKEST HOUR” at D’Place Entertainment.

As the movie ended and closing credits rolled, Oldman received a robust standing ovation from the packed house as he took a seat in front of the big screen.

In a quasi philosophical and articulate account, he reflected on a number of emotions, memories and thoughts regarding Churchill the man, stating that in his research, he discovered over 2,000 biographies of the revered statesman, Prime Minister and Nobel Prize winner (1953, for literature!).

But he also insisted that, in spite of the overwhelming cinematic evidence to the contrary, “You can’t really become another person.”

Oldman spoke of his vivid memories playing in war rubble while growing up in England.  His mum is 98.

He said in his research he listened to audio recordings of Churchill’s famous BBC speeches to the war-ravaged, fearful, Brits.  He (Oldman) thought the recordings sounded a “little flat” since they weren’t recorded live.  So when Oldman performed the speeches for the movie, he had to enhance them a bit with a vitality culled from his understanding of the man himself.  Watching newsreels and historical footage, Oldman recognized an “impish” energy in the man in the man in spite of his rotund figure and love of Brandy and cigars.

Oldman said it was also helpful to be allowed to sit in Churchill’s actual chair in the war room that was so meticulously recreated for the movie.  He noted Churchill’s fingernail scratches on the arm rests of the actual chair and hoped or implied that being in the proximity of where the great man considered his most difficult decisions would inform his performance.

Oldman’s staggering turn as Churchill is so complete and total, it’s almost as if the actor’s physical presence is invisible.  During the Q&A, no one even asked about the remarkable make-up and the process of transforming him (Oldman) into a photo-realistic Churchill.

There were many other obvious questions that went unasked.  Here’s what I was to inquire of Mr. Oldman:

CVW:  Was there a moment you knew you wanted to pursue acting as a profession?

I went to the movies a lot.  I had grown up with Alec Guinness and the Ealing comedies.  (Ealing is also a producing studio of “THE DARKEST HOUR”). My heroes were Tom Courteny, Albert Finney and directors from that period like Tony Richardson.  They were all sort of swimming in my head.

One evening I saw a movie with Malcolm McDowell in it called “THE RAGING MOON.”  I think it has a different title in America (“LONG AGO, TOMORROW”).  A Brian Forbes movie.  Haven’t seen it for a long time and I don’t really know if it holds up, but there was something…  A moment.

Maybe it was the menace mixed with vulnerability that McDowell certainly had as a young man.  Perhaps it was those big broad eyes like blue watery moons.  Almost a face like a clown.  It’s not conventionally handsome – but something grabbed me about that performance.  And it really was – alcoholics call it the ‘moment of clarity’ – like a lightning bolt.  The lights in the room got brighter, and I went: ‘I WANT TO DO THAT!  THAT’S WHAT I WANT TO DO!’  You know that lopsided grin McDowell has in films like A CLOCKWORK ORANGE and OH LUCKY MAN?  I used to practice that grin in the mirror when I was 14.  Ha!

There’s a story that John Lennon told about getting into music.  He was in line to see an Elvis Presley movie and now we talk about post Spielberg movies but then the lined stretched around several blocks and he said when sitting in the audience and every time Elvis appeared on the screen the girls would all go mad and scream and he thought to himself, ‘Now that’s a good job!’”

CVW: Do you have any advice to a young actor just starting out?

Oldman: “What I’d say to young people is: ‘You’ve got to want it with your life!’

It’s gotta be like the most important thing.  You’ve got to live it, breathe it, eat it

But it’s really about doing the work.

I have a small pet peeve.  Young people now think they can get it in five minutes.

When I arrived in the UK to start rehearsal for “The Darkest Hour,” thank heaven we had rehearsals — which is very rare in movie-making these days — so when I got there for rehearsals, I was word perfect when we got to actually physicalize and vocalize the work.

You can’t be searching for that kind of dialogue; your mind is already going a million miles an hour.

The longer you’re with something; it’s in your bloodstream.  And it’s in your DNA.  That’s the ultimate.  You know it so well you can forget it.

It’s what you do with a play.  You have to live your life, but it’s in you and at night when the curtain goes up you get out there and do your thing.  Being ‘off the book’ is not an extraordinary ability or super talent or any of this.  It’s actually hard work.

My son used to play the trumpet — he doesn’t anymore — and every time a guy came once a week with the lesson, he hadn’t practiced and I said you’re just doing the same lesson over and over again — it’s the same lesson you took last week, and the week before that, you’re doing no homework, just the lesson, there’s no substitute in anything you do without craft — putting work in it and really understanding it.

But probably the best advice I ever got was: ‘Get there early and know your lines.’”