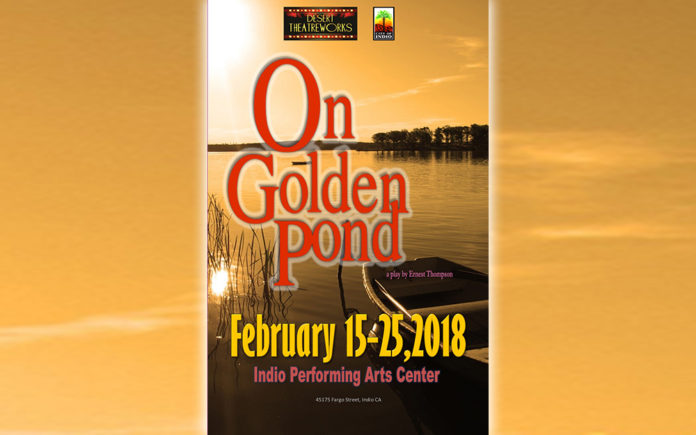 Desert TheatreWorks, production of, ‘On Golden Pond,’ is what happens when an extremely talented cast meets a funny, witty, poignant, moving and heartfelt script.  Mix in a creative set (Set Designer, Allan H. Jensen,) with a skilled director, (Steve Fisher,) and you have the makings for a top-notch theatrical experience.

A life long love that survives the ages is a fantasy for most.  But when it is dramatized upon the stage with all of the joys, heartaches and warts exposed for the world to see, only then can it fully be appreciated for the magic that it truly is.   Ernest Thompson’s 1979 Tony nominated play, “On Golden Pond,” is a slice of life story that reveals the love and determination that keeps a couple together for near half a century and the challenges they face in their twilight years.

‘On Golden Pond,’ is a simple story about complex issues.  The cantankerous retired English Professor, Norman Thayer Jr., portrayed wonderfully by Arnie Kleban, is turning 80.  His memory is fading and his step is faltering and he knows that he has many more years behind him than ahead. Kleban makes this role his own.  I didn’t initially like the ornery old Norman at all, but thanks to Kleban’s wonderful presentation, he grew on me. 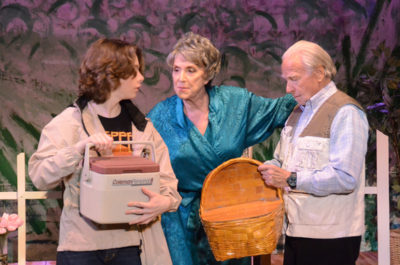 Norman and his wife of 49 years, Ethel, portrayed by the incomparable June August, have returned to their cabin on Golden Pond as they do every summer. Ethel is his rock and able to smooth out rough waters as easily as he is able to create a tsunami.  August, weaves her magic into this performance and lays claim to the stage.  She is one of the Coachella Valley’s leading ladies and is a pure pleasure to watch.

This particular summer they are visited by their 42 year old daughter Chelsea, performed by the very talented Daniela Ryan, Chelsea’s dentist boyfriend, Bill Ray (Greg Aratin,) and his 13 year old son, Billy Ray Jr. (Angus Feath.)  Feath steals any scene he’s in.  He’s personable and charismatic, as the new summer guest who seems to break through Norman’s gruff exterior. It’s obvious that Feath has a wonderful career in theatre ahead, if that’s the road he chooses.

The play explores the estranged and life long troubled relationship between Norman and Chelsea. Their daughter’s tumultuous history with finding a solid relationship reflects the polar opposite of what her parents have experienced.

Chelsea’s statement to her father, “It just seems that we’ve been mad at each other for so long,”  and his response, “I didn’t think we were mad; I just thought we didn’t like each other,” is a reflection of the life long conflict they’ve endured.  But it’s Ethel’s words to her daughter that seems to bring it all into perspective.

“Don’t you think that everyone looks back on their childhood with a certain amount of bitterness and regret about something?  You’re a big girl now. Aren’t you tired of it all? Bore. Bore. It doesn’t have to ruin your life, darling. Life marches by, Chels. I suggest you get on with it.”

‘On Golden Pond,’ is not the perfect, happily ever after fairytale, but it is definitely a ‘maybe if we work at it, we’ll get there,’ kind of story.

This show is highly recommended for family members of all ages and can be seen through February 25th, at The Indio Performing Arts Center, located at 45175 Fargo Street, Indio, CA.