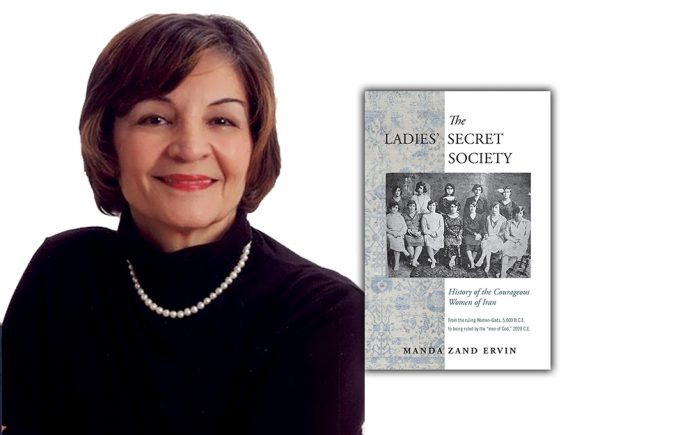 So much of our geo-political stress is based in Middle East.  Iran has become a target of the current administration and it is important to have some knowledge of the country’s ancient beginnings to better understand their current struggles.  The Ladies’ Secret Society: History of the courageous Women of Iran From the Ruling Women-Gods, 5000 B.C.E. to Being Ruled by the “Men of God,” 2020 C.E. by Manda Zand Ervin (New English Review Press, 339 pages) is about Iran’s pre-Islamic civilization, their country’s human dignity, and how the nation’s women continue to fight even under gender apartheid to regain liberty for a suppressed populace.

Author Ervin shares how Iranians were once a majority of Zoroastrians who lived peaceably with Jews, Christians and other religious factions.  They are “Persian” (not Arab) with a rich culture of literature, art, matriarchal gods and gender-neutral roots.

Their mother-god “Seina” believed in the nobility of the human race who were her “thinking children.”  She was their nurturer and their guide.  In the cradle of civilization, ancient Iranians held her as a feminine deity circa 4000 B.C.E.

The Persian Empire was established in 575 B.C.E. by Cyrus, the Achaemenid who was a Zoroastrian and believed in “Good thoughts, good words and good deeds.”  Men and women were treated equally!  Women shared in all aspects of society, including the military.

Cyrus created the first federation of independent states establishing one of the greatest empires of human history and became known as “Cyrus the Great.”  Greeks, Romans, Jews and even Thomas Jefferson have acknowledged Cyrus for being a benevolent man and compassionate leader.  He is quoted as saying: “Only those who serve the people deserve to rule the people.”

While many believe Iran was the same as Fascism’s “Aryan,” the word actually means “noble or hospitable land.”

Arab occupation and the enforcement of Islam came in 651 A.D. and remains to this day.  Shi’ism took hold and the rights of women were revoked and women became the property of men.  Women continue to fight for their rights — gaining and losing — while the religious based system remains in power.  Iranian society has been in a constant war of internal ideologies pitted against each other for centuries.

This book fascinated me.  I was caught up with the many heroic women who have fought to the literal death to bring about change in a country dominated by the clerical patriarchal establishment.

I was horrified by the ignorance of American Presidents.  Instead of supporting the democratic, secular government, one President chose the Ayatollah.  During better years, US Presidents helped Iran, encouraging independence and provided financial support.  I had no idea how much Russia and the United Kingdom dominated the politics and controlled the Iranian economy.  A new constitution gave women some basic rights.  And, then it was gone again.  Their vote, half the population, was not counted or it was ignored.

Iranian history is important especially as the relationship with the US grows worse.  But the message of this book is that Iran is a country with strong men and women who have a history of peace and liberty.  Eight-six percent of the Iranian people oppose the theocratic regime and want the clerics out of power.  But, how do they do that?

I appreciated the author’s view of the imposed, required hijab.  She calls it a weapon of “visual terrorism” and a symbol of totalitarian ideology.  She points to the hijab as a neo-Islamist law designed to promote gender apartheid or gender slavery.   Hijab is an Arabic word that means “separation.”

Throughout the Iranian history and its revolutions, women have been working hard to bring about change.  Many organized to form the “Ladies Secret Society.”   Whether it was educating children, setting up hospitals or fighting for the right to ride a bicycle, they have continued to make their voices heard.

The women of the US have yet to support their Iranian sisters’ fight for equality.

The author is clearly doing her best to appeal to Western women in hopes to generate change.  She includes names of Iranian people who are imprisoned in Iran now for no crime other than being “protestors” or “feminists.”   She is also concerned with the misunderstandings and misinformation about Iran, its history and its people.

In 1979, before the author was forced to leave her beloved homeland in fear of execution, she protested with her grandmother, mother and youngest daughter.  It was International Women’s Day and 100,000 women gathered in Tehran.  At that time, women did not wear the hijab.  Together the women marched and shouted:  “Freedom is universal, not Western and not Eastern.”

What is religious patriarchy doing to women, society and the world?