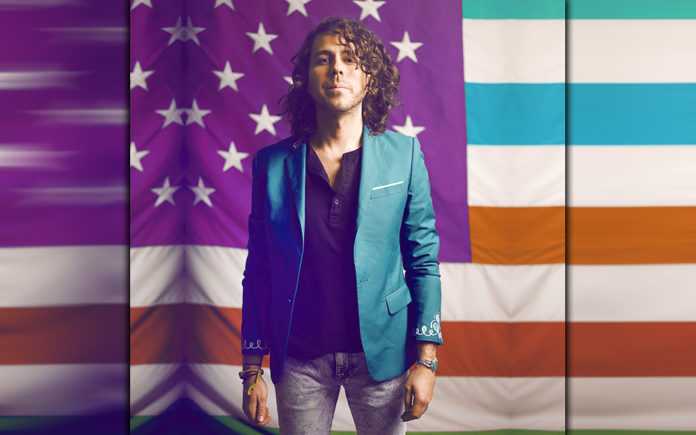 Gene Evaro, Jr., one of the hardest working, creative and prolific independent musicians of his generation, will release his 12th album in 11 years at the open air, outdoor concert venue that is uniquely Pappy and Harriet’s. After selling out multiple shows on the iconic, indoor stage, there will be ample room for the masses under the Pioneertown stars to experience the soulful, groovy feels that only Gene Evaro Jr. and band can bring. Like the title song, the band and all in attendance will be celebrating, “Like It’s 1965.”

“Like it’s 1965 is a reference to a vibe of being sexy, free spirited, open minded and youthful,” says Evaro Jr.  “The title song is all about feeling good with the person you’re with. The album and the album art represent my feelings that the same spirit that was alive in the 60’s is now flowing back into the mainstream. And not just mainstream music, but culture in this country in general. We see it in the examples of young people being more proactive in politics, civil rights promises being revisited and corrected, woman’s rights being asserted, the demand for equal rights for all sexual orientations, even with people caring about the planet. Music is good again!”

“The cover art for the album is a picture of me with a multicolored version of the American flag, because in my naive opinion, it’s time that we quickly, reimagine this country. This could be a new flag. We need it! Symbolically, it is one that is vibrant and represents a multi-conscience – one that doesn’t just signify blood, purity and justice, but one that includes and celebrates multiple races, viewpoints, and multiple languages. The idea is that this country is changing! A lot of people are afraid and will do everything they can to resist this change. But we, as young people, aren’t scared. We are excited and motivated. Anyway, that’s my 3 cents.”

A staple at the Joshua Tree Music Festival, Gene Evaro Jr. has shared stages and toured with popular artists Milky Chance, Elle King, Blues Traveler and many others, building a fanbase throughout the US as well as Brazil and Australia. Still, he has never forgotten where he came from and his fanbase at home grows solidly every year. Just this past December, Evaro Jr. and bandmates made time to give back to their high desert hometown when they hosted a benefit concert for the Yucca Valley High School Select Choir. He and his bandmates donated 100% of the proceeds of their show to the students to help them meet the 60k cost of the choir’s Washington, D.C. Spring Tour. Those of us who have followed and been moved by Evaro Jr.’s music, are sitting on the edge or our seats, waiting and watching for this deserving artist to see his greatest dreams come to fruition.

“I’m hungrier now more than ever,” he shared.  “Hungry to be around more people like me. I guess I am getting older and less excited to waste my time with people or vibes that don’t better me or my heart. When I was younger, I wanted to be everything for everyone. It’s different now. Mostly because I’m not satisfied with my musicianship; I’m not satisfied with my voice; I’m not satisfied with my songs. Music is the best reflection of me, and sometimes looking in the mirror is hard, but lately I’ve been looking at it a lot more.  I’ve been doing something about the things that I don’t like. You could say, I am growing.”

Holding it All Together:

Gene Evaro Jr.’s story as a man and an artist has its deep heartaches and difficult changes, all of which are sorted out, it would seem, in his songs – painstakingly, honestly bled songs. “Yea, the music tends to be honest. Bands are hard to keep together (much like a family). The truth is most of our band members from the last few years are no longer playing with us. And as of last week, Clint our sax player, can’t play with us because of a medical condition. So, it’s basically just me and Piper who have really stuck to this project. We feel blessed to have played with all the wonderful people we’ve played with as a band. The truth about a lot of things in life is you gotta surround yourself with people that not only want to be a part of something bigger, but who are committed to bettering themselves as people, musically and personally. Sometimes growing means growing apart from each other. That’s a beautiful truth that every parent must accept when they have a child that grows up; it’s a life lesson for all, I think. Change is a beautiful thing.”

So how, in a world where relationships fall apart under the best of circumstances, do Gene Evaro, Jr. and bass goddess, Piper Robison, keep their connection healthy and thriving in one of the toughest industries around?  “I make her coffee, she makes my tea,” laughs Gene Jr. “We both want this as much as the next musician/band, but more importantly, we are willing to put in the work to make it happen. Being a musician almost comes secondary to all the other things that are required of you if you want to be heard above the noise of all the other amazing artists and talent out there in the world. We work extremely well together on a lot of levels.  I think the sheer work ethic is what we have most in common, and is what keeps this working. We see amazing musicians and artists out there in the world and want to contribute, not just stay the same or chill on it. Nothing is guaranteed except for the fact that if you give it your all, then you’ve barely begun.”

The New Album: Evaro Jr. says, “I think it’s better than the last. It has more songs about Piper, believe it or not,” he offered, tongue-in-cheek.  “We’ve gone through a lot together and It’s hard not to have that leave an impression on my music. It has more electronic elements for sure. It has a song written by our former trombone player, Scott Kisinger, called “Attention”. And it talks a lot about who I am growing into.”

With the promotion of the new record as his current primary focus, the big show at Pappy and Harriet’s, a tour with Moonchild, and some Canadian tour prospects on the horizon, Evaro Jr. never loses sight of his wildest dream nor does he quit working to bring it to life.  “My wildest dream? I write that song I’ve been trying to write since forever that connects with the world. I win multiple Grammys. I form and run my own label and can be as creative as I am now without the financial limitations that currently shape how and when we do things. I can buy my mom a house by the beach. I can call the best directors and afford to have them on my team. I can call on people like Chance The Rapper, Kendrick Lamar or Stephen Colbert and make cool shit happen anytime. I can pitch my movie ideas to reputable productions. I can help my other family members with any opportunities that I have. I can make a lot of money and build a badass music venue in Joshua Tree. We can start a foundation that donates money to independent bands that are badass and need help financially (without wanting to own them forever). I can start a hotel chain for touring bands where you can rehearse, check in at 6 in the morning… you know – some basic things like that.”

“We are so grateful for everyone’s support and feel blessed to be able to create and play music for a living. Friday, April 6th, at Pappy and Harriet’s, will be memorable for more reasons than one. My sister, Gabriella Evaro, will be opening up the night with her own music at 8pm.”

Gabriella Evaro is a multi-Instrumentalist, singer, and songwriter. She is the lead singer of Earth Moon Earth, Dream Pop Experimental Synth, and the desert duo, Lucky Bones with Chris Unck. She is also the creator and designer of “The Cactus Wine Experience”, a unique, musical, wild west burlesque production. Most recently, Gabriella Evaro has launched a solo project, looping guitar, bass, beats and vocals that are seductively captivating.  You will be absolutely mesmerized.

Tickets are available online for will call pick up at pappyandharriets.com and the following link: https://www.ticketfly.com/purchase/event/1631380?utm_medium=bks