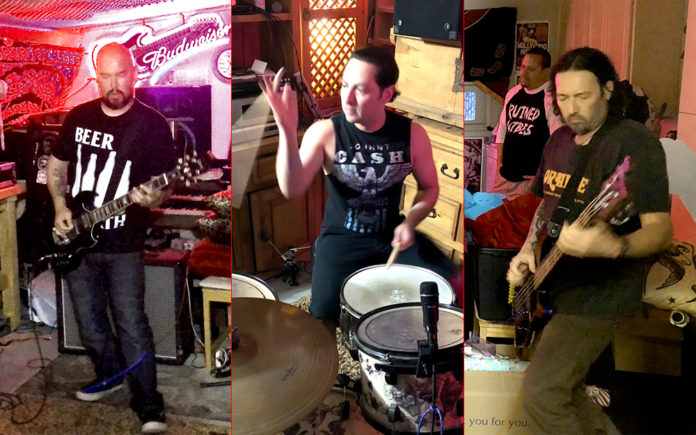 The early 2000s were an interesting time for desert music. The scene had never been bigger in terms of international notoriety. Kyuss was over. Queens Of The Stone Age were ruling the airwaves, and the scene had never been stronger. There was no shortage of amazing music. The Hellions were going strong, Ming Tran was killing it, Unida was representing our desert internationally, The Wisemen were on top of the scene, punk rock was thriving with The Wreckage who would morph into The Traces… and who can forget about Family Butcher? Family Butcher wasn’t a show, it was an event.

This was also the era of The Whizards. The Whizards is the brainchild of multi- instrumentalist Mike Pygmie. There were some early versions of the band, but they really solidified with the line-up of Billy Cordell on bass, Benny Cancino Jr. on drums, and Mike Pygmie on Guitar, vocals, and yes… turntables. Most people will associate turntables with the rap/rock movement of the early 2000s, but I can assure you, that is not what The Whizards were – or should I say are?

The Whizards reputation in the local scene and regionally grew to astronomical proportions. They were a musician’s band. They were exactly what our scene needed. Their talent caught the eye of a few labels, but they were waiting for the right deal to come around. Before they signed a deal, the band broke up do to other opportunities and the rollercoaster of life.

Fast forward to 2016. I approached Mike at a show after his band You Know Who had played. Jamie Hargate from The Hellions sort of gave me the courage to do it. I had a local label, Ruined Vibes, and had a couple pretty big bands on my label. I had just helped The Hellions release their debut album on vinyl. Thanks to Jamie, I felt like maybe I was established enough to ask Mike about The Whizards. I found out The Whizards never officially released any music, and were sitting on what Mike thought was an EP. After a “let me talk to the guys,” and some research, we found that there was actually a full length album, and all three members were up for finally releasing it.

This was a long road for me. The Whizards were a genre bending band that I loved when I was in my early 20s. I loved the desert rock scene, but was heavily involved in the desert rave scene. Turntablism was one of my favorite types of music. One night while at Arthur Seay’s place, I was sitting in my friend Jesse’s rehearsal spot. I heard amazing music emanating from next door one minute, and scratching the next. I was instantly intrigued and totally hooked. Now, 15 years or so later, I was releasing The Whizards album.

After well over a decade, The Whizards are making their return. So far, this is a one of kind show made possible by CV Weekly and Ruined Vibes. On Saturday, April 7, 2018 at 8pm, The Hood Bar and Pizza will be hosting the return. The lineup also includes long-time friends, The Hellions, their producer, Brad Garrow’s band, Brain Vat, and Mike’s bandmate in Mondo Generator and legendary QOTSA bassist Nick Oliveri. There will be 2 versions of the LP available, and just released through Hollywoodland Records, their debut album on CD. The CD is exclusively available through Palm Springs Vinyl and Collectibles and on Amazon. There will also be some amazing surprises.

Coachella Valley Weekly: How did the The Whizards form?

Benny Cancino Jr.: (Pointing at Mike Pygmie) “It started with him. He’s the mastermind. He had the Whizards. We were doing other stuff.”

Mike Pygmie: “Well, there was a ‘pre’ Whizards. I wouldn’t call it ‘THE’ Whizards. It was a good band. It was Jeff Bowman on drums, Jon Weigand on bass, Charlie Ellis on guitar and keyboards and myself.”

Billy Cordell: “It was a blend of Mighty Jack in a way.”

Pygmie: “Yeah, that’s why it was more of a ‘pre’ Whizards. It was a great band and I’m super proud of it, but The Whizards is us. This line-up. I loved playing with those dudes. It was more of a band situation though. You know? You get into a room with everybody and compromise. That’s the right thing to do. With these guys, I didn’t feel like we compromised, we were on the same page. We all knew what we wanted to do. Billy was the first of the current line up.”

Pygmie: “There was one show in particular where at the last minute, Jeff couldn’t do it, so I reached out to Benny. He learned the songs and really killed it. We knew instantly he was in the band. We didn’t tell him at first though.”

CVW: What were you doing before joining The Whizards Benny?

Cancino: “I worked at this restaurant, and the manager played guitar. We jammed for a little bit. I was jamming in Allied Elements. It was a hip hop group.”

Pygmie: “That’s how we met. They were jamming with me at my house. I remember thinking, ‘he’s a really good drummer, but I want to drum for this band. KB was in it. He did the vocals on our song, Dedication. So I kept him on the back burner.”

Cancino: “Yeah! I remember that. Fucking asshole. I was uncomfortable there.”

Pygmie: “Yeah. You could tell. Haha.”

Cordell: “That’s where it really morphed into this…”

Cancino: “It was on then. It was like each guy was two people. Like parliament! It was layered with Mike looping, singing, playing guitar, and the turntables. Billy played so fast, it was like two bassists.”

CVW: What were you coming off of Billy?

Cordell: “I think I was playing with Zu. That was Chris Hale and Brady Houghton from Slow Burn.”

CVW: How did you guys rise in popularity so fast?

Cancino: “They didn’t have a choice.”

Cordell: “We annihilated every show!”

Pygmie: “We were just shoving down everybody’s throats to be honest. My favorite thing about The Whizards was playing out of town. We would show up and load in our gear. They would immediately see the turntables and be like, ‘woah. What’s this? Some Limp Bizkit shit or what?’ We’d be like, ‘yeah. Whatever dude.’ And then destroy the club. We’d almost feel guilty about it. We would fuck up their local scene. It was their scene until we played. We had good songs. Whether people got it or not, we did it.”

Cancino: “We were musician’s musicians. The bands who were on the bill will us were blown away.”

Pygmie: “Yeah. That was very flattering. That’s the ultimate compliment. If I could do anything, I wanted other bands to want to check us out.”

CVW: Okay. I get it. You guys were good. Geez. You guys did blend genres. No matter what genre somebody was into, you guys nailed it. Dedication is a full on hip hop song. You guys had this record. Were you shopping it?

Pygmie: “We recorded what we thought was a demo, but it turned into a record…”

Cancino: “Because of Jason it turned into a record!”

Pygmie: “Regardless of if somebody was going to put it out, we were recording this record.”

Cordell: “Brad’s (Garrow) studio was fresh too. We were the first to record there.”

Pygmie: “A lot of thought and love went into that record, not only from us, but from Brad. It was a magical experience. Immediately after recording it, Rotten Records offered us a deal. We waited on it. We shopped it a bit, but nothing else happened. I looked back often and thought we should have taken that deal because at least then it would be out.”

Pygmie: “Exactly. Now I’m extremely happy. Now it IS out. On our terms with our friends. That’s exactly how it needed to come out.”

Cancino: “No legal mumbo jumbo. We still own our music. It’s out. It’s a great record.”

Cordell: “Now we get to play again and annihilate The Hood!”

CVW: How did we end up where we are? Album is out, and you guys are playing a show for the first time in a decade?

Pygmie: “Jason put it out there. The band never left my mind. Jason sparked that memory. These dudes were into it. Initially, we thought there were only 6 songs, but when I approached Brad, he had 8 songs. We were initially going to put it out on Ruined Vibes as a 10’, but it was too long. We made an album out of it. It was crazy. We heard it for the first time in years, and now we’re playing it.”

CVW: Everybody wants to know, is this a one off or are you open to playing more?

Pygmie: “There’s definitely a chance. It depends on the people. If they want to see us, we’ll maybe play more shows. We will be playing the longest set we’ve ever played at this show.”

The Whizards at The Hood on Saturday, April 7 @8:00pm with Brain Vat, The Hellions and special guest Nick Oliveri. $5.00 cover.