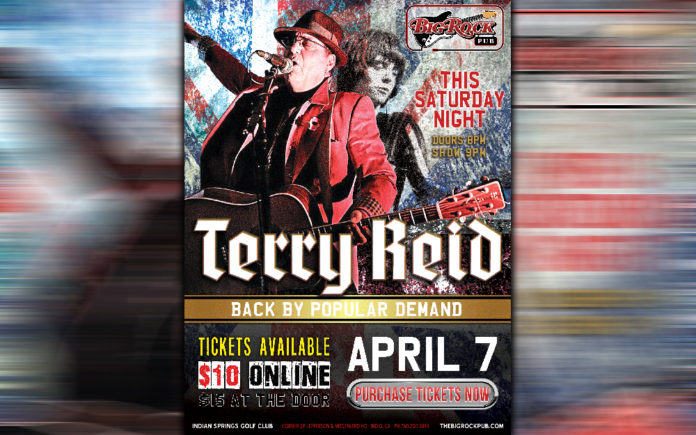 British musician Terry Reid has performed with some of the biggest names in the music industry, as a session musician and a supporting act. He toured with the Rolling Stones, Jethro Tull, and Fleetwood Mac, to name only a few. But the man who Robert Plant once said was the best singer of his time, is a legend in his own right. He’s a musician’s musician – so thoroughly respected by his (often more commercially-successful) peers. I had the pleasure of speaking with Superlungs (as he’s aptly nicknamed) ahead of his Saturday, April 7 show at Big Rock Pub.

CVW: How did you come to live in the desert?

TR: “I’ve been coming here for 25 years with friends of mine who had horses at the polo grounds. A funny thing happened – we were staying at the La Quinta Resort and as I was sitting there having a drink, this guy with a thick British accent was talking and it turns out it was Eric Burdon (of War and the Animals) and I’d known him for years and years and he said he was living here, so that started a whole thing. I’d come up and see him. He’s a good egg. Two English guys in a place like this, it’s like English guys being in a Western. Old English boys love Westerns. So that’s how I started but then it became a real passion. I met my wife Annette and we got married at La Quinta Resort.”

CVW: After over 50 years in the music industry, collaborating with the biggest musical acts, what still gets you excited?

TR: “Has it really been that long? That’s probably about right. I was playing a gig when I was 15 and Keith Richards and Mick Jagger came to it and elected me to go on the tour with them. I was thinking, somebody’s gotta be joking here. That was the start. So what excites me now? I still enjoy what I do so much. If you don’t enjoy then don’t do it because no one will believe you! I think it’s very humbling being recognized or listened to by a lot of younger guys that are at the way top of their tree. And they’ll come up to me and go on about ‘how do you play this song?’ I’ll think they’re pulling my leg and realize they’re serious. Joe Bonamassa loves the things I do and I sold him a guitar of mine and we have become the best of friends. The other thing is I got a call from friend Jack Douglas, a producer for Aerosmith who I’ve known forever. He said Joe Perry was doing a solo album and did I wanna come throw something into it. We wrote four songs on his new album. I’m real proud of that because when you’re thrown in at the deep end amazing things will happen when the climate is right and the people are right. Joe Walsh had something he always said, ‘I don’t know what a rock star is but I is one.’ And that’s how I feel.”

CVW: Talk to me about who your “friends” are playing with you on April 7. 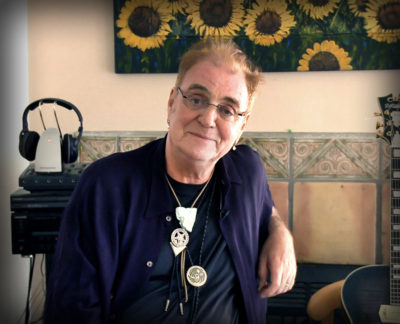 TR: “You never know a couple people might turn up! There’s Phil Jones on drums, he used to play with Tom Petty, Stevie Nicks, James Taylor… Phil and I used to have a residency playing at a place in LA called The Joint. So we started off and when everyone was in town from tour, they’d turn up and want to do a song – Keith Richards, Stevie Nicks, you never knew who’d show up – the place was always packed based on who might be there! Then there’s Jim Wilson, who is an incredible bass player, and Robert Davis on guitar. We all get on well. I love playing with these guys because if I go off on a different direction, they’ll go with me. They play that New Orleans style so they take off wherever it’s going. We’re full of surprises.”

TR: “Yes, I played with Bonnie, I’m glad you know that! A group of us called ourselves The California Club. It was me, Bonnie, Jackson Browne, Don Henley, and a few others. We all got together doing harmonies on each other’s albums.”

CVW: You’ve played at BRP once before right?

TR: “Yes, I played there last fall. It’s a great place! Everything sounds great when we play there. And I love Lisa too, always good to see Lisa. Hell of a singer too! A lot of girls sound like somebody else and sound similar to each other, but she has a distinctive voice.”

CVW: What can fans expect at your BRP show?

TR: “I have no clue what’s going to happen. It’s always a surprise to me that people are familiar with what I’ve done. I guess you could say I have a cult following. I play things from different albums I’ve done. On top of that, it’s an opportunity to do something you wouldn’t necessarily hear that I love. I like to play the roots of what inspired me to write songs in the first place.”

To find out more about the Terry Reid and Friends show at Big Rock Pub on Saturday, April 7, use this link: http://www.thebigrockpub.com/entertainment