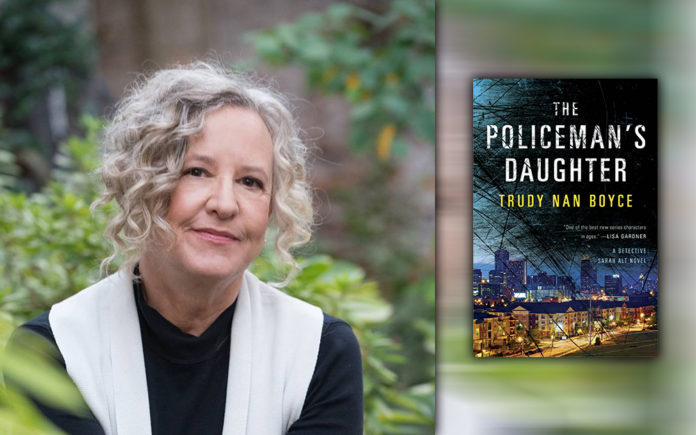 Good or bad, parents have the most significant impact on the lives of their children, which inevitably shapes their future.  In The Policeman’s Daughter, by Trudy Nan Boyce (Putnam, 337 pages), multi-generations pay a high price for parental damage.

This is the third book in the Detective Sarah Alt series and is the origin story of how “Salt” — her nickname derived from her first initial and last name — moves from being a beat cop to having a career as a homicide detective.

As a female cop, Salt had to fight to get assigned to a place called “The Homes.” It is the most dangerous beat in Atlanta, Georgia, a violent community controlled by gangs and drugs.

Salt has worked the beat for ten years and has earned a good reputation among those she patrols as being fair and honest.   After being shot in the head during a traffic stop, she returns to work policing the predominantly black community with her wise, black, male partner “Pepper.”

Shannell, a skinny old crack whore, needs Salt’s help finding her husband, Big D, whom she just stabbed severing an artery before he wondered off.  The whole family gets involved.  Little D, their son and gang-banger, finds the knife and Salt must convince him that his father will get medical attention and his mother will get treatment, if he lets her do her job.

When Shannell ends up shot to death, and discovered by Mary, her ten-year-old daughter, Big D can’t be found.  Salt wants to solve the murder.  The homicide detectives assigned to the case have no leads and are too busy to spend anytime in The Homes to find Shannell’s killer.

Salt can especially relate to Mary because Salt was the same age when she found her father dead from a self-inflicted gun shot wound.  Against orders and without letting Pepper know, Salt investigates Shannell’s case.  As she gets closer to finding the truth, she herself becomes a target, but Salt is able to solve the mystery because of her experience and knowledge of The Homes.

I like the Salt character.  She is an independent, self-actualized woman who works hard, takes her job seriously and wants to make a difference.   She understands the challenges of the community she polices and does her best to help the folks in The Homes.  She respects the people there and connects with them personally when she can.  It’s not easy and she must constantly prove herself to the people of The Homes and to her department.

With her recent head injury, Salt finds herself looking back at her past and her relationship with her father who was also a cop.  During her investigation, Salt discovers that one of The Homes’ residents knew her dad and that he also patrolled The Homes.

But for Salt’s father, the ongoing violence, hopelessness and generational neglect and poverty was too overwhelming and he took his life.

I liked the characters in The Homes.  Author Boyce does a good job making their difficult and criminal lives real.  They are not just stereotypical gangbangers.  They speak with an authentic voice challenging the outsiders’ understanding of their world.  They have children, families and lost dreams.  Where can they go?  What can they do?  The Homes is all they know.  It is is their life.  Salt has her job and they have theirs.

Boyce herself was an Atlanta beat cop for thirty years! She holds a doctorate degree in community counseling.  She worked as a hostage negotiator and homicide detective.  Certainly, this is why her stories have such insightful social observations and include convincing detail and dialogue.

Since the title of the book is The Policeman’s Daughter, I did expect more about Salt and her relationship with her father or his past as a cop, but maybe this will come in future Detective Sarah Alt novels now that we have some understanding of her pathology growing up.  I anticipate that this part of Salt’s life will add to her future experience as a detective.

No doubt, Salt will likely have to use her detective skills to find additional truths about her father, which will likely reveal more of what has shaped her as a person — and detective.

After all, our parents contribute much more than just their DNA.  Their influence, directly or indirectly, form who we are and what we become.