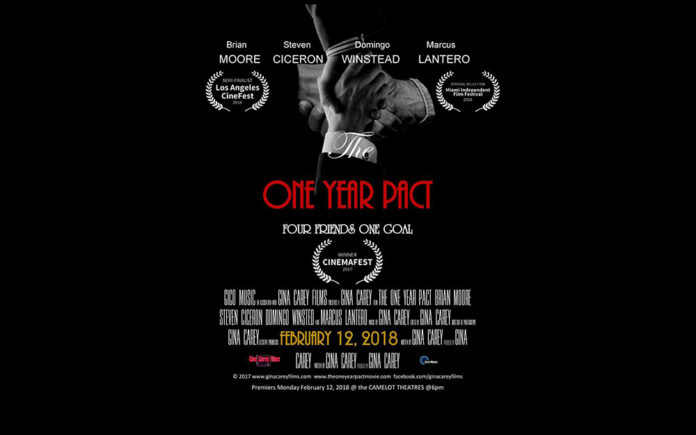 Gina Carey Films in association with Gico Music is set to premier “The One Year Pact” at the prestigious “The Camelot Theatres”, 2300 E Baristo Rd, Palm Springs, CA 92262, on Monday, February 12, 2018 at 6pm. “The One Year Pact” is a clever family parody around four men, Paul (Brian Moore), Dustin (Marcus Lantero), Karl (Steven Ciceron) and Gregg (Domingo Winstead), whose developmental years comprised of simply wisecracking and having a great time.

Solid plans for fulfilling childhood dreams and financial stability were never in any of their plans until they reached the other side of 50. When ring leader, Paul Dryer has an “aha” moment, he quickly assembles the guys in an effort to forge a one year pact to success. Shortly after solidifying their treaty, these lifelong friends find themselves individually faced with a plethora of adult situations that will threaten to disrupt their irresponsible lifestyles and will force them to become responsible men.

“The One Year Pact “was written, produced, filmed and edited by Gina Carey. Gina has an unquenchable passion to produce family friendly cinema. She hopes to use her gift of screenwriting to inspire, encourage and shine the spotlight social issues that impact our society today. Her ultimate goal is to bring a message of hope, love and light through cinema.

Gina Carey’s filmography includes, “The Unexpected” (Feature Film, February 2016), “Aspire to Inspire” (Documentary, June 2016) and “The Assumptions” (Feature Film, February 27, 2017) and “The One Year Pact.” Casting for her 5th feature film, “Acts of Kindness” will begin in January of 2018. “The One Year Pact” staring cast includes, Marcus Lantero, Steven Ciceron, Brian Moore and Domingo Winstead. Gina is also the executive producer of this film. The formal red carpet arrival step and repeat ceremony will begin at 6pm at The Camelot Theatres. Immediately following the star-studded cast arrival will be the theatrical screening of “The One Year Pact”.

Ticket are on sale and can be purchased online at, www.ginacareyfilms.com or www.theoneyearpactmovie.com or at the Camelot Theatres, 2300 E Baristo Rd, Palm Springs, CA 92262. This event is open to the public. For additional information contact ginacareyfilms@gmail.com or call (760) 678-5815.