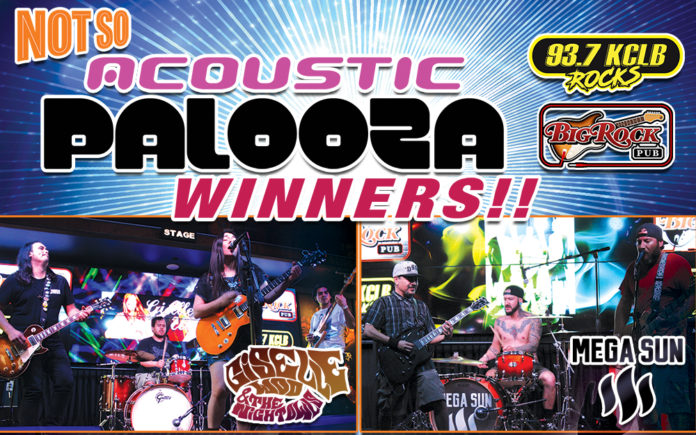 Chris Rivera: “It was an honor to share the stage with such talented artist. What a great first experience playing the Big Rock pub. I really think all the bands won i definitely didn’t see any losers up there. I would have to say it was a total success ran very smooth and was cool to be a part of. I’m definitely a fan of a few more bands in the Coachella Valley after last night.”

Tyler Ontiveros: “The Not So Acoustic Palooza was an amazing experience to be a part of. To be able to share our new music with so many people and to have the opportunity to play in front of industry professionals was amazing. I agree with Chris that the event couldn’t have ran any smoother and we really enjoyed sharing the stage with all of the artists that performed. I too am a fan of more local artists because of this. The Big Rock Pub has been on the list of places to play and had a great time doing so. We all are super stoked to be on a 30 day rotation on 93.7 KCLB.”

Jeremy Parsons: “I just want to say how much we appreciate everyone’s support. This has been surreal. Still kinda shell shocked from the experience. Hope everyone had a fun time.”

Giselle Woo: “It truly meant so much to me, more than anybody can imagine! I was coming into it a bit hesitant, and once again my own insecurities were destroyed by the audience’s reaction, and in this case, each and everyone one of the judges responses, they had some amazing things to say about our performance. It was reassuring and I’m excited to move onward! Thank you thank you thank you, from the bottom of my heart.”

This past Thursday night the Not So Acoustic Palooza competition/event took place at Big Rock Pub with 6 bands competing to win a 30 day radio rotation on 93.7 KCLB. Three Female and three male bands/acts competed with one female and one male act selected as winners.

The event was produced by Entertainment Director of Big Rock Pub, Lisa Lynn Morgan, sponsored by TK, Program Director for 93.7 KCLB, and hosted by Lance Riebsomer. 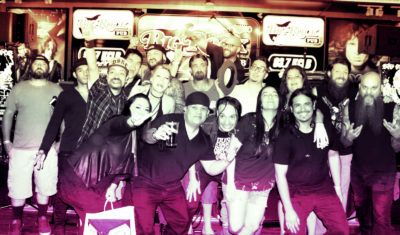 The multi-genre competition was tough with every band that performed giving top notch performances with not one slacker in the bunch. Every band was a recognizable name and for good reason. This was the best of the best in our scene. The judges panel was quite impressive as well and included: Mickey Thomas (Jefferson Starship/Starship), Victoria Williams (singer/songwriter whose songs have been recorded by Pearl Jam, Lou Reed and Lucinda Williams, just to name a few), Lisa Mednick Powell (musician/songwriter who has worked with Wylie Hubbard, James McMurtry, The Chills, and Juliana Hatfield, to name a few), Shirley Evaro (singer/performer from the famous and talented Evaro family), Chris Unck (producer and owner of High Lonesome recording studio in Joshua Tree, who has toured, written and performed with Pink, Lisa Loeb and Gavin Degraw, to name a few) and our very own Tracy Dietlin (owner/Publisher of CV Weekly and owner/Producer of CV Music Awards). 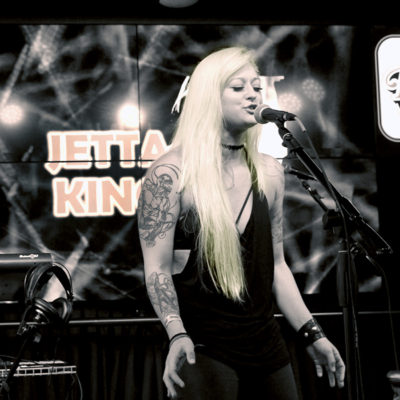 The night started off with Jetta King. You may recognize her from the hip hop/pop duo Her Hymns. Unfortunately, the duo is no more. They were contenders in the CV Weekly Music Showcase. This was Jetta’s first performance as a solo artist. This was obvious with Jetta’s introduction. She was nervous at first. Once she performed, she came alive. Her performance outshined her recording by leaps and bounds. This was possibly the most powerful set of the evening.

Next was Empty Seat. They had a No Doubt sound. This band was extremely talented, but lacked the tight sound that would be needed to win a competition like this. Empty Seat has the potential to go far, but need a little guidance. Their sound was amazing.

Up next, Giselle Woo and The Night Owls showed us what they were all about. There is a reason Giselle and her band of misfits won Tachevah. It was clear that they came to rock. The Night Owls had a new bassist and drummer. That was shocking considering that Rob Peterson has been drumming for them for a while now, and he is arguably the best drummer still remaining from the old school days. The new drummer filled his shoes nicely though.

Sunday Funeral graced the stage after Giselle’s amazing performance. Every time this band plays, they are better. Fresh off a video release of “Battle Cry,” it was obvious that they were here to prove something. They did prove something. They proved that they are a force to be reckoned with. The bass lines were stellar. Lead vocalist Justin Ledesma was on point. The drummer and bassist were locked. It was an amazing performance.

Death In Pretty Wrapping are a force in the local scene. Mike Cancino on drums and Arthur Seay on lead guitar, have been part of quite a few amazing and successful bands from the desert including House of Broken Promises and Unida. These guys are pros and it showed. They were joined on stage by Derek Timmons on bass and Michael Keeth on vocals. These two dudes are amazing local talent too. Derek is in Sleazy Cortez, a local sludgy doomy band, and Michael has won Best Male Vocalist at the CVMAs the last 5 years in a row and is an incredible frontman for this hard rock band who slayed their performance. They definitely are top notch in our scene.

To finish the night, the most anticipated band, Mega Sun played. This band won Best New Band at this year’s CVMAs. It was immediately apparent why. They played a few songs off their highly anticipated debut album. This album was produced by Snot and Invitro alumni Mikey Doling. Mega Sun is a perfect fit for Doling’s producer skills. They just wrapped recording at Brad Garrow’s Dead End Studios. They were assuredly still on a high from recording. They were a highlight of the evening.

The Best Female Band and best male band are getting their selected single played on KCLB for 30 days. It was a tough call in both categories. Jetta King was profoundly amazing, but Giselle’s experience shined. Ultimately, Giselle Woo and The Night Owls were victorious in the female category. It was a coin flip on who would win.

The Best Male Band was just as close. This time, it was reverse of the females. Mega Sun squeaked out a victory over the veterans Death in Pretty Wrapping. There was no way the audience could have determined the victor. Either way it went, it was deserved. Mega Sun shines brighter than our sun this time!