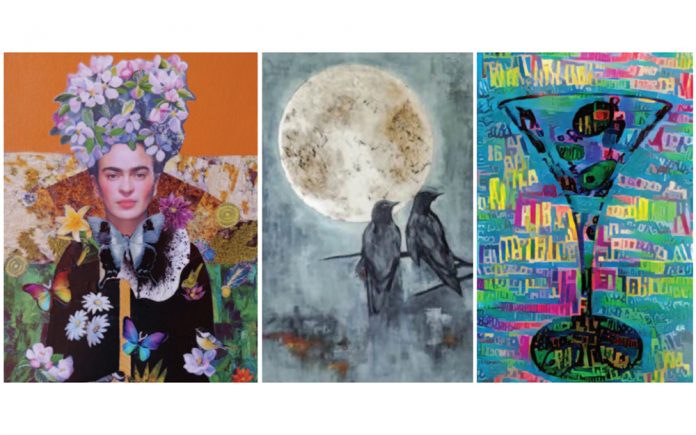 One of a Kind for Once in a Lifetime

Gallery 500 will be the host of the Giving Gifts of Art. Opening on November 21, with a reception from 5 to 7pm, nine local artists have joined together to create a unique experience where “gifts” are not a generic after-thought. The work presented represents individual creations that are as unique as the artist behind the creation.

“What’s better than a handpicked, hand crafted, creative gift just for you?” noted local photographer Terry Hastings. Known for his thematic work that centers around the elements – Fire, Earth, Wind and Water, Terry’s work explores both sides of the equation, what may be reality and what may be only illusionary. For example, Terry’s recent show, The Planets, offered a different take on the planets and the myths that surround them.

Terry’s photography has been incorporated on fabric, wood, metal and, yes, paper. A chance to gift one of these works is a gift worth giving.

The other artists in this opportunity bring their creative expression to the art of gift giving.  The works are original and range in price.

Artist Karin Skiba began to show her work at Barnsdall Park Art Center, LACMA, Security Pacific as well as galleries in LA, Oregon, Chicago, and Detroit. Her work is multimedia and draws often on the feminine face. Her work is thought provoking with sensitivity that draws the viewer in the psyche of the face that stares back from the work.

Andrea Raft is an award-winning artist skilled with acrylic paints, textured layering, Asian and New Age themes.  She began her journey to expressiveness at the Brentwood Art Center in Los Angeles. It is the texture that removes the simplicity of her the imagery into a new level of conversation. Her work seems to be a response rather that a reaction to the modern world. There is a disquieting calm and a sensuality of surreal that makes Andrea’s work stand out.

Nathan Allen has over 20 years’ experience in interior design and offers clients a full service, high-end experience from concept to completion. He has successful merged the business side of art with the art of art.

Emerging artist Carole Hatcher brings her African-inspired assemblage to the event. She was previous represent by Colliding Worlds Fine Art Gallery and has had her work shown at UCR and Palm Springs Artist Council Group Show.

The detailed mastery of the work of Diane Morgan cannot be understated. She graduated from the University of Michigan with a Bachelor of Fine Arts Degree, major in painting. After a successful career in advertising, she now paints full-time. She is also one the Valley’s most sought-after art teachers. Diane has won numerous accolades for her work. No piece, from smaller to large scale, escapes her attention to the details. Whatever the image, it pours off the canvas in the real world.

Lori Worby-Krebs was a high school counselor who encouraged teens to follow their dreams. Now following her own dream, she focuses on her creative energy to communicate her observations about what connects us as human beings. For her work has to have meaning – the painting a static still-life is devoid of “meaning”. Her work searches for the spirituality that lives within us.

Photographer Kasey Scott uses her work as a means of communication when words failed. Kasey immerses herself in everything from a chaotic mixed media piece to a lazy sketch. Her work is literally capturing a moment in time – a moment that is lost as a new moment takes hold. Poignant and playful, Kasey brings a sense of joie de vivre in the most unexpected ways.

Ulrike brings her world of Magical Realism into the mix. Her work is reminiscent of Henri Rousseau. For both the flatness of primitive style, lends a calming innocence to her wok of animals. Recently tow large works of Ulrike were permanently installed at the Loma Linda University Transplant Institute in San Bernardino.

The Opening Reception on November 21, from 5 to 7pm is free to the Public. Shopping events are scheduled for Sunday, December 8 and December 14 from Noon to 3pm. Gallery 500 is located at 500 South Palm Canyon Drive, Palm Springs CA.