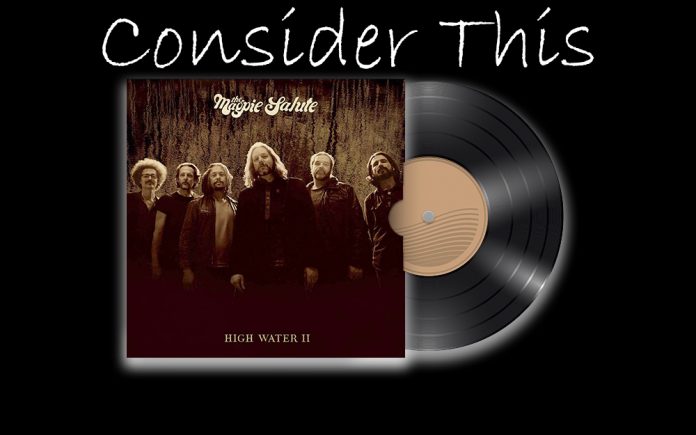 Conventional Rock N’ Roll wisdom insists that an artist or band has their whole life to create their first album, and maybe 18 months to make a follow-up. Chances are, that one will suck. Led Zeppelin “II” shot that theory to shit, as did Adele’s 21, the Beastie Boys’ Paul’s Boutique, Nirvana’s Nevermind and Amy Winehouse’s Back To Black. Joining that august list is The Magpie Salute’s Highwater II album.

The Magpie Salute rose from the acrimonious ashes of The Black Crowes. The Crowes formed in Murrieta, Georgia in the late ‘80s, the brainchild of the Robinson Brothers. Chris, the eldest, was the charismatic front man, Rich played lead guitar. Originally a five-piece, their sound combined the swagger of bands like the Stones and the Faces, along with more homegrown influences like the Southern Fried R&B found at Stax-Volt and Muscle Shoals and the Blues/Jam aesthetic of the Allman Brothers.

The band signed with Rick Rubin’s (Def) American label and their 1990 debut, Shake Your Money Maker was a smash success, achieving critical acclaim and commercial success. A string of (successful) albums, and myriad personnel changes followed as well as solo efforts from both Chris and Rich. But somewhere in 2015, it all came to a grinding halt. The brothers suffered a rancorous split, each offering wildly different accounts as to what tore them apart. But the result was the same, the Black Crowes were done.

Left to his own devices, Rich quickly assembled The Magpie Salute. He recruited former Crow compadres guitarist Marc Ford, bassist Sven Pipien and Eddie Harsch on keys. Rich didn’t have to search far for a magnetic front-man. He first crossed paths with British musician John Hogg, when John and Sean Genocky’s band Moke were tapped as an opening act for the Black Crowes in the late ‘90s. In 2002, Rich and John briefly collaborated on a project called Hookah Brown, but it was short-lived. Sadly, before The Magpie Salute’s inaugural tour, Eddie Harsch passed away rather suddenly. He was replaced by Matt Slocum. When drummer Joe Magistro joined, the line-up was complete.

At the beginning of 2017, The Magpie Salute booked three shows at New York’s Grammercy Theatre. When those dates quickly sold-out they added a fourth show, and not long after, scheduled a full-fledged U.S. tour. To commemorate their inaugural tour, the band released a self-titled, limited edition live recording. A year later, their first official long-player, High Water 1 arrived. The record offered a master class in economical song craft, coupled with instrumental acumen and Soulful, authentic vocals. It was a potent combo-platter, allowing Rich to fully step out of his brother’s shadow. It managed to land at the top of several “Best Of 2018” lists.

Now after several successful months on the road, The Magpie Salute have released Highwater II. Although it was recorded during the same sessions as the first album, the plan was always to release them separately. HW II’s first four tracks blast out of the speakers, something like a high-powered fusillade. Each cut detonates like a smart bomb. The rapid fire “Sooner Or Later” is anchored by a punishing triple-time meter that echoes the Jazz-tinged percussive paradigm of Hendrix’s “Manic Depression.” Shards of guitar, prowling bass and cobwebby keys are salted in the mix as lyrics detail a return from a Homeric (possibly chemically enhanced) journey; “Tales of the unexpected following, trails of rainbow swallowing, time, before it bursts now into fragments of consciousness through the perforated shine/Sooner or later I’ll make it back home again.” The action slows on the break as willowy piano notes cascade over a static-y guitar solo and the melody careens back toward the sweet chorus.

If Sly and the Family Stone ever collaborated with the Allman Brothers and the Rolling Stones, it might sound something like “Gimme Something.” A walloping backbeat, barbed wire bass lines, pinwheeling guitars and Honky-Tonk piano all conspire to take you higher. The lyrics seem to be angling for a distraction from reality; “This world could be such a beautiful baby, but the real politik disease keeps driving us underground… Gimme something to take me far away from here, gimme something to lift this cloud.” By the time the song reaches the middle eight, the arrangement achieves Gospel heft, lyrics reveal “Peace comes your way, when you live by love and harmony,” before launching into a cataclysmic denouement.

The juggernaut continues as “Gimme…” folds into “Leave It All Behind,” which amps up the urgency up to 11. Explosive rhythms propel the chorus and are neatly juxtaposed by the slow-cooked groove of the verses. Lyrics yearn to break the ties that bind; “All around me there is sadness again, I see it in their eyes, in people’s eyes/Burning fires, and I won’t shed a tear for them anymore, because I’m sinking deep, deep down inside, yes I am.” A shuddery, Psychedelic guitar solo erupts on the break, flanked by fluid acoustic licks, lithe bass lines, Hammond B3 textures and plinking piano, before the whole operation stops on a dime.

Closing out the raucous first quarter of the record is “In Here,” a thick slab of Southern Boogie, driven by a kinetic backbeat and stately piano.  Even as lyrics like “Grifters abound, creepy unveiled, try to soak up the sound that surrounds you,” seem to acknowledge times are tough in the 21st century, John’s whiskey-soaked rasp remains warm and inviting. As the instrumentation expands, it envelopes the melody with thrumming bass runs, a brace of horns and soaring electric guitar. The song concludes with this empowering couplet; “Open up, pull yourselves around, look up at the stars and feel the wind in your hair/It’s golden and it’s fine to feel afraid, happy and sadness, you’re only human.”

Highwater II is stacked with killer cuts, but three songs truly stand out. “Mother Storm” offers some good old country comfort. Slipstream acoustic riffs wash over fluttery piano notes, bramble-thick bass and a see-saw groove, all in service to a glorious, minor key melody. Slightly cryptic lyrics insist it’s time to put away childish things; “Gone the days of looking up to name the clouds, dream away, you see yourself among the stars/How long will it take for you to grab that lead? So long, pack up your jacks it’s time to leave, pull it back within the heart, time to settle in and start to start.” Acoustic guitars rev on the instrumental break as Hammond B3 colors dot the margins, stentorian electric riffs are layered in, but everything cedes the spotlight to Matt’s gossamer piano notes. It’s all too lovely for words.

“Turn It Around” is a bit of a Glam/Glitter hoedown. Sinewy guitars, jagged bass lines and full-throttle keys ride roughshod over a pummeling beat. Lyrics leapfrog from declarations of narcissism; “I’m a needle that punctures, an explosion in slow-motion, a light never-ending, watch as I sparkle…So what if my life starts to get in your way? My vision is beautiful is all I can say,” to moments of doubt and reflection; “Voices in my head, all those things that you said, obscure and obtuse, now you got me wondering, you got me wondering, Honey, what’s the use?” But all the bluster and introspection, take a backseat to the arrangement’s  Glam-tastic Stomp. Snake-charmer guitars slither through a wash of instrumentation, quickly unleashing a phased and dusted solo on the break.

Finally, there’s the calibrated chaos of “Doesn’t Really Matter” which opens with protean, Chuck Berry-flavored riffs, angular piano, blitzkrieg bass and a chunky beat; a kaleidoscopic carpe diem, the arrangement consistently shapeshifts. Strafing guitars connect funky bass lines, Blaxploitation keys and a muscular rhythm. Just as quickly, the whole enterprise powers down to a Bluesy pas de deux between Hammond B3 and guitar. Then revving up and accelerating into the finish as a spiky and spectral guitar solo fades into the sunset.

Other interesting tracks include the bottleneck Blues of “You And I,” the expansive Soul-shake of “A Mirror” and the swaggering “Life Is A Landslide.” Most songs here are either Rich Robinson compositions or joint efforts between Rich and John. The outlier here is “Lost Boy,” a collaboration from Rich and guitarist Marc Ford. Echoing the rotogravure gravitas of The Band, as well as Tom Petty’s austral beginnings, the song features Americana superstar Alison Krauss on vocals and fiddle.

The album closes with the sanctified crunch of “Where Is This Place.” The gutbucket groove is accented by sparkling piano, gnarled guitar chords, pliant bass fills and a fractious beat. John’s flinty vocal notes are shaded by Rich and Marc’s authoritative growls. The lyrics confront an errant lover; “Your voice is clear and your emotions they sting me, why don’t you look into my eyes see into your soul look into mine.” (Yeah, you wanton Jezebel! You do that). Betrayal would seem more bitter, were it not wrapped in this baddass Bluesbreaker.

News has just broken that the Robinson Brothers have apparently declared a temporary cease fire. Rich and Chris have agreed to $hake their Money Makers for a 2020 tour commemorating the 30th anniversary of their debut. Hopefully this will only sideline The Magpie Salute temporarily, as commerce must be served.

Highwater II adds new colors and textures to The Magpie Salute’s sonic paint box. Lines brilliantly blur between Country, Folk, Rock and Soul, and the result is equally economical and expansive. In the song “In Here,” they note; “We stand alone in our creation, and lay it out for you.”