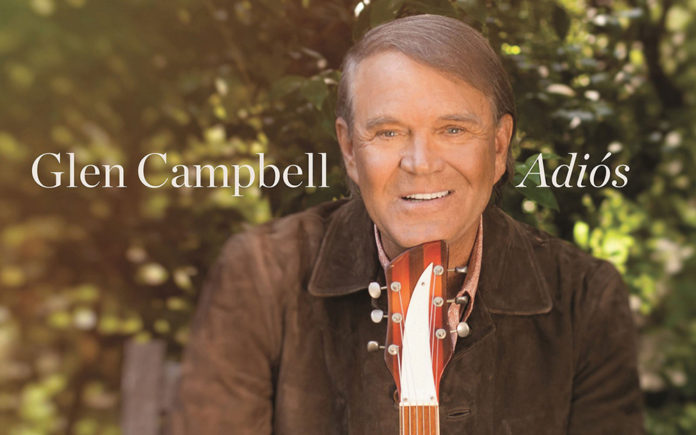 There’s such a finality to the word “goodbye.”

Farewell, so long, even adieu and cheerio feel less permanent. Adios feels slightly less irrevocable, as though there’s a chance the person saying this word might return.

Adios is what Glen Campbell is saying on his latest, ne’ last record. After nearly 60 years in the music business, a movie career, a television series, 58 studio albums, six live albums, 21 Grammy nominations, 10 Grammy wins and a documentary, the Rhinestone Cowboy is setting down his guitar for good.

Glen Travis Campbell is the seventh son of 12 children, born in 1936 to John Wesley and Carrie Dell Campbell in Billstown, a small community outside of Delight, Arkansas. As a toddler, his Uncle Boo taught him guitar. He continued to hone his skills through childhood. Country music was his first love, but he quickly gravitated to Jazz players like Barney Kessel and Django Reinhardt.

By the time He was 18, he moved to Albuquerque and joined his Uncle’s band, Dick Bills And The Sandia Mountain Boys. Four years later he was fronting his own group, the Western Wranglers. As the ‘60s dawned, he relocated to Los Angeles, intent on pursuing a career in music.

He recorded his first album, Big Bluegrass Special, in 1962. Predictably, it went nowhere. But he quickly began earning a reputation as a studio guitarist, playing sessions for, hit makers like Bobby Darin and Rick Nelson. His diligence paid off and soon he fell in with the Wrecking Crew.

The Wrecking Crew was a loose knit circle of session musicians who seemed to play on everyone’s records. Drummer Hal Blaine, bassist Carol Kaye, multi-instrumentalists like Leon Russell and Larry Knechtel, along with guitarists Tommy Tedesco, Al Caiola and Billy Strange were on “first call” at myriad studios around L.A. They played with everyone from Sinatras, (Frank and Nancy), to Byrds and Monkees. Producer Phil Spector used them exclusively, as did Brian Wilson and the Beach Boys.

Brian and the Boys thought so highly of Glen that when Brian began to have mental health issues, preferring to remain in the studio while the group was out on tour, Glen was chosen as his replacement on the road. Later, he was offered a permanent position in the band, but there was not enough profit participation, so he graciously declined.

He still had high hopes for his solo career, continuing to quietly release music through the Capitol label. In 1965, he had some moderate success covering Buffy St. Marie’s “Universal Soldier,” (even though he disavowed the song’s pacifist message). But it was 1967 that proved to be a watershed year for Glen Campbell.

Teaming up with a new producer, he had a hit with John Hartford’s “Gentle On My Mind,” But he really struck pay dirt when they discovered the songs of Jimmy Webb. The Oklahoma native had moved to Hollywood hoping to make it as a singer-songwriter. He had minor successes when the Supremes and Johnny Rivers recorded his songs. But when Glen put his folksy imprimatur on two tracks, “Wichita Lineman” and “By The Time I Get To Phoenix,” his profile was raised exponentially.

When the Smothers Brothers’ Variety television series proved too subversive and controversial, the CBS network replaced it with “Glen Campbell’s Goodtime Hour,” which lasted three years. The series highlighted Glen’s affable charms and featured performances from the Monkees, Linda Rondstadt, Neil Diamond, Bread, and Roger Miller. It also launched the careers of Anne Murray and Jerry Reed. Glen added acting to his list of myriad talents, working alongside John Wayne in “True Grit,” and Joe Namath in “Norwood.”

Throughout the ‘70s, Glen maintained a presence on the charts and had massive hits in 1975 and 1977 with “Rhinestone Cowboy” and “Southern Nights.” But the excesses of the ‘Me Decade’ caught up with him as the ‘70s rolled into the ‘80s.” Married and divorced three times, and the father of five children, Glen began a tumultuous relationship with Country singer Tanya Tucker, that became tabloid fodder. The couple recorded a series of songs together and cycled through a plethora of substances.

By the mid ‘80s his personal life stabilized when Kim Woollen entered his life. The pair met on a blind date in 1981 and married the following year. Glen cut back on touring and recording, concentrating on raising the couple’s two sons, Cal and Shannon, and their daughter, Ashley. He also found time to improve his golf game.

Throughout the remainder of the 20th century Glen recorded sporadically and performed primarily at his Branson Missouri theatre. He still managed to give Country superstar Alan Jackson his first big break and served as inspiration to younger performers like Keith Urban. In 2005, he was inducted into the Country Music Hall Of Fame.

In 2011, Glen and Julian doubled down on the winning formula of Meet… releasing Ghost On The Canvas, which featured interpretations of songs from Paul Westerberg, Teddy Thompson and Jakob Dylan, as well as several tracks he co-wrote with Julian. At this point, the need to create felt more urgent, as Glen had recently been diagnosed with Alzheimer’s disease.

Following a final tour, that included his sons Cal and Shannon, as well as daughter, Ashley as part of his touring band, and a heartfelt and heartbreaking documentary, “Glen Campbell: I’ll Be Me,” he seemed to retreat into the shadows of his illness. But expressing the need to distill “what magic was left,” he entered the studio for one last time concentrating on songs he had long loved but never recorded. The result is Adios.

The album opens with a propulsive version of “Everybody’s Talkin’.” The Fred Neil classic, popularized by Harry Nilsson, had been a staple of his live shows for decades. Rippling guitar licks lattice over Ashley Campbell’s prickly banjo runs, as high lonesome pedal steel swoops and Soars. Glen’s supple tenor remains boyish and elastic, hitting all the high notes.

He puts his stamp on several familiar songs, giving the original versions a run for their money. On Bob Dylan’s cranky kiss-off, “Don’t Think Twice, It’s All Right,” his mien is playful and somewhat mischievous Opening with a swirly guitar break nicked from Jerry Reed, the tune is anchored by slapdash percussion and rollicking piano fills. His ability to suck the venom out of the lyrics breathes new life into the song.

He trades verses with Willie Nelson on the latter’s “Funny How Time Slips Away.” The melody is tethered to a clip-clop gait and surprisingly Jazzy piano underpinnings. Willie’s patented Trigger riffs crest over surging fiddles and sparkly electric guitar. Glen’s honeyed timbre is sweetly juxtaposed with Willie’s rough-hewn drawl.

The intro to Roger Miller’s “Am I All Alone” comes from a bare-bones home demo, recorded by the songwriter himself. It segues effortlessly into Glen’s plaintive version, which features fluid harmony vocals from Vince Gill. Plangent piano, cascading acoustic riffs, and sultry pedal steel coalesce around a mournful melody.

Of course, no Glen Campbell record would be complete without a few Jimmy Webb cuts. “Just Like Always” features lush instrumentation and Glen’s burnished vocals. “It Won’t Bring Her Back” is a bittersweet barroom ballad that is accented by expansive pedal steel. The lyrics are equal parts erudite and empathetic, and Glen follows each labyrinthine twist and turn; “You know it’s no disgrace, to try and save some face, I did that very thing when I was in your place/I’m speaking e from experience, I knew the lady first, it’s hard work forgettin’ baby, you can work up quite a thirst, but drinkin’ is the worst.”

“Postcard From Paris” paints a vivid picture of loneliness and regret. A painterly travelogue, it offers Technicolor imagery that circles around the old homily, “Home Is Where The Heart Is.” Adding to this timeless chiaroscuro are the effortless hereditary harmonies of Cal, Shannon and Ashley Campbell.

The album’s most rustic track is probably its best. “Arkansas Farmboy” was written by Carl Jackson, the multi-instrumentalist who joined Glen’s touring band as a teenager in 1972 and ended up producing this record. The melody drafts off the old Country chestnut, “In The Pines,” (which his granddad taught Glen at age five). A Bluegrass lament it sketches out his biography as “a seventh son born to an Arkansas farmer and a hardworkin’ mother of twelve.”

The album closes with a final Jimmy Webb composition, the title track. Glen’s vocal performance is his most unfettered and thrilling, hitting soulful notes like a teenager and investing his whole self in each turn of phrase. Ostensibly, the song wistfully recalls a failed romantic relationship. Lyrics like “Don’t think I’m ungrateful and don’t look so morose, adios/We never really made it baby, but we came pretty close/Our dreams of endless summers were just too grandiose, adios adios,” take on an added subtext in light of Glen’s declining health. If you don’t find yourself tearing up with each listen, well, you’re made of stone.

This album is clearly a label of love, with the help of Carl Jackson and all the musicians and friends who participated, Glen and his family were allowed to control the narrative. With “Adios’” he says so long on his terms. As he retreats from the spotlight, he leaves us with this poignant parting gift. Thanks Glen.