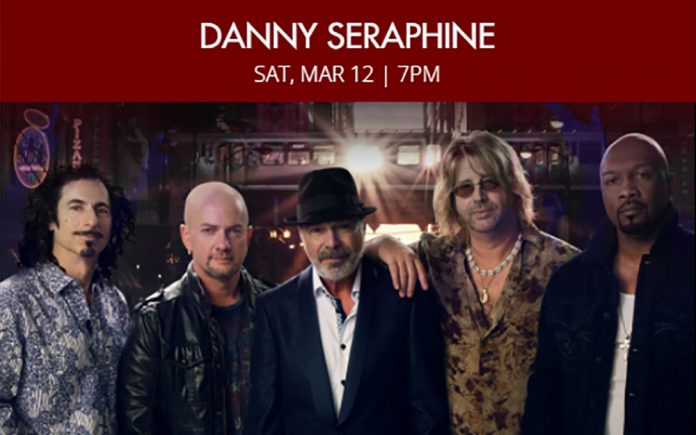 Danny Seraphine, former member of Chicago and current member of California Transit Authority, is playing at Fantasy Springs this weekend in their newly improved Rock Yard for their Rock Yard on Steroids night. Seraphine has performed in all sizes of venues, but what he loves about playing at the Rock Yard compared to a bigger venue, is its energy. “It’s got a great vibe! The energy is always fun. When we played there last year, it was one of the first live shows in a long time, so it was exciting. The audience comes out to have a good time.” Seraphine says he loves playing in the Coachella Valley – he has a lot of friends in the area and golfs here often.

Now more than ever, Seraphine appreciates performing live, especially after taking a break from it for 15 years (from 1990 to 2005). “I needed to stop when I did. I didn’t plan on getting back to it, but a void wasn’t getting filled and that was music and drumming. God put me here to play drums. I don’t intend on stopping until I can’t do it at a high level.” The need to play and connect with music validates him, he tells me, and is such an important part of what he’s done with his life. So, what does it mean to him that the iconic songs he helped write are in the musical tapestry of so many people’s lives, even current generations? “It’s humbling to say the least. You never take it for granted. Hearing you’re making somebody’s life better justifies what I do. What I set out to accomplish was to make the world a better place and God knows we need it right now.”

Seraphine dabbled in other instruments when he studied at DePaul University. Renowned percussion educator, Bob Tilles, wanted him to be well-rounded and try out the xylophone, marimba, and piano. But Seraphine felt he wouldn’t have been able to become a great drummer and play other instruments at the same time. That focus served him well, as he was inducted into the Rock and Roll Hall of Fame in 2016 (with Chicago). Of all his accomplishments, that one is near the top of his list. He says, “I’ve been out of the band 32 years now. But the music keeps me very much connected and I’m very proud of the body of work.”

Fans who attend the Rock Yard on Steroids show at Fantasy Springs can expect to hear Chicago music as California Transit Authority plays all the hits songs in the spirit of the original band. As Seraphine tells it, “There’s a raw energy, amazing musicianship, and vocals. We play live music, no tracks – which is rare these days. Live music sounds better because it’s unbridled, unhibited. It’s going to be a fairly long show and fans will hear every Chicago song and thensome.”

To find out more info about this show on Saturday, March 12, visit: https://www.fantasyspringsresort.com/rock-yard/