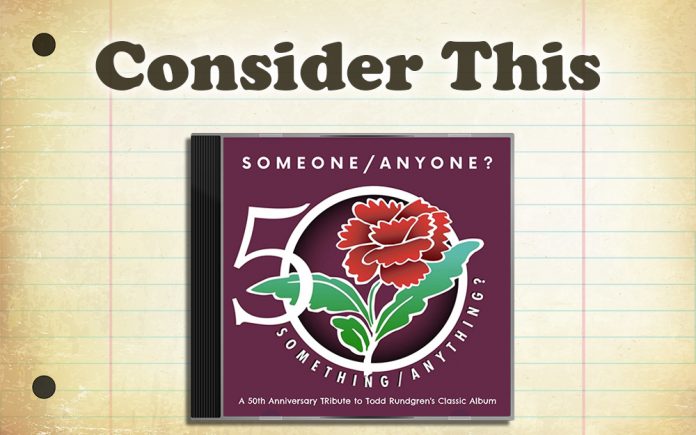 Todd Rundgren has finally, finally been inducted into the Rock & Roll Hall Of Fame. About fuckin’ time. The musical polymath has been a working musician since the mid ‘60s, first gaining national attention with the Anglophilic Philly Garage band Nazz (sometimes known as The Nazz). Following their dissolution, he embarked on an adventurous solo career that’s spanned 52 years. Meaning, he’s been eligible since 1993. But no matter, Todd never required industry approbation. He’s always gone his own way.

To celebrate the 50th anniversary of Todd’s third solo album, Something/Anything?, protean producer, musician, Todd disciple and all around musical Mad-Hatter, Fernando Perdomo has enlisted a stellar cast of like-minded artists to reinterpret the watershed double LP as Someone/Anyone?

Following Todd’s original template, the album opens with the one-two punch of “I Saw The Light” and “It Wouldn’t Have Made Any Difference.” Louise Goffin tackles the former, which feels wholly apropos, as critics inexplicably tagged Todd as a male Carole King, favorably comparing Something to Tapestry. The daughter of Carole and legendary songwriter Jerry Goffin, Louise is a well-respected musician in her own right, who jump-started her career in 1979. A pluperfect example of Power Pop perfection, Louise builds on “…Light’s” lithe spirit, opening with a walloping backbeat and salting the mix with pounding piano, rumbling bass, ringing guitars, searing violin, celestial glockenspiel and assorted handclaps. Her flinty vocals are accented by stacked Girl-Group harmonies and manage to convey the shock and awe that accompanies dumbstruck love; “Though we had our fling, I just never would suspect a thing, til that little bell began to ring, in my head, in my head/But I tried to run, though I knew it wouldn’t help me none, cause I couldn’t ever love no one, or so I said, but my feelings for you were just something I never knew, til I saw the light in your eyes.” On the break, a stinging electric sitar solo ratchets up the rapture, as Louise confidently urges the aggregate to swing it, and they do, until the track fades out.

Power Pop savant Ken Sharp acquits himself nicely on the latter. The sweet instrumentation, shimmery guitars, slinky electric sitar, tinkling bell tree, coruscated piano and a delicate tip-toe beat can’t camouflage the lyrics’ bitter note of betrayal. Ken’s soulful falsetto phrasing teases out the ache; “Do you remember the last time I said ‘If I ever thought of lying, I’d rather think of dying instead,’ and maybe you remember the last time you called me to say we were through, how it took a million tears, just to prove they were all for you, but those days were through.”

Todd labelled side one, “a bouquet of ear-catching melodies.” Half a century later, that assessment still holds true. Tiny Demons add some grit to “Wolfman Jack,” a shagadelic ‘60s Soul pastiche that pays homage to the 20th century’s most flamboyant DJ. Meanwhile, something of a one-man-band, Probyn Gregory slows the roll of “Cold Morning Light,” blending burnished piano, percolating keys, rippling acoustic guitars, sylvan flute and syncopated horns. Harsh reality intrudes, rising with the sun; “we are close, we are friends, and our love never ends, but in the cold morning light I see, that you won’t be back for me.” A plaintive trumpet solo underscores the lyrical yearning.

Nezrock, featuring Dennis Diken and Chris Bolger, executes an iridescent version of “It Takes Two To Tango (This One’s For The Girls).” Honeyed harmonies and glossy instrumentation, including syrupy Wurlitzer, wobbly clavinet and wah-wah guitars, can’t sugarcoat unrepentant fauxpologies like “This is for the girls that just couldn’t see that my only sin was being me.”

Side one closes with Geoff Pearlman’s gorgeous read of “Sweeter Memories.” Honoring Todd’s one-man-band aesthetic, Geoff lattices soaring guitars atop burnished keys and a spatial beat. The heartbreak arrives in ¾ time as pragmatic lyrics remind us “there’s a life full of pain and a life full of glee, so you see, the rain doesn’t mean much to me/For I know that it pays making light of livings tragedies, make your days be as bright, take a few of these, the sweeter memories.”

Todd characterized the second half of the first LP as “cerebral,” and it begins rather infamously with “Intro.” Astral Drive dives head first into a pithy tutorial on recording studio trickery, updating it slightly with references to streaming and auto-tune. From here out, the record plummets down a rabbit-hole, beginning with Fernando Perdomo’s madcap interpretation of the instrumental, “Breathless.” Opening with tightly-sprung carnival keys and AOR guitars, the song shapeshifts from majestic Prog-Rock, to player piano Boogie-Woogie, and to a cartoon-y Cha-Cha-Cha that obliquely references The Beatles’ stompy version of “Twist & Shout,” all in under four minutes.

Victor Wainwright And The WildRoots put their Southern-fried stank all over the winsome “Saving Grace.” Soulful vocals ride roughshod over sparkly harmonies, shang-a-lang guitars, rattle-trap keys, tensile bass and a thumpy beat. Sanguine lyrics like “They think that I’m no good, but I will make myself understood, cause I believe it all along are matched by the elastic melody and fizzy arrangement. Astral Drive (a.k.a. Phil Thornalley) returns, playing everything himself, with an achingly pure read of “Marlene.” The remainder of side two amps up the musical tsuris with Adrian Bougeois’ thunderous pillaged and plundered “Song Of The Viking” and Phil Parlopiano’s dissonant Psychedelic gumbo of “I Went To The Mirror.”

The latter half of Someone/Anyone hugs tight to TR’s original chaotic contours. Things get a little wiggy, or as Todd subtitled side three, “The Kid Gets Heavy.” There’s a yin-yang energy to the opening two tracks. Rob Bonfiglio, along with Stan Lynch, Stephen Dees and Durga McBroom heighten the sturm und drang of “Black Mariah.” The menacing arrangement locks into a scorching Prog-Rock groove accented by strafing guitars, wily Wurlitzer, prowling bass lines and a conga-fied beat. Lyrics like “My eyes they burned, my insides turned, my brain it rolled, unbeliever, but now I’ve learned, I took my turn, I come up cold lick the edges of paranoia. Conversely, “One More Day (No Word),” from Creamer, cloaks the lyrical angst and ennui in a fluffy, Meringue-y melody and an ornate arrangement. Supple acoustic guitars wash over cinematic keys undercutting the lyrical conceit that there’s “too little to do and too much time.” Although Creamer (ne’ Phillip Creamer) and Fernando hew pretty closely to Todd’s original blueprint, this version veers into Big Star territory.

In Marshall Crenshaw’s hands, “Couldn’t I Just Tell You” is rendered even sweeter. Limning the ache of unrequited love, lyrics like “I don’t come whining with my heart on my sleeve, I’m not a coward, if that’s what you believe, and I’m not afraid but not ashamed if it’s true, I got to talk to you and then I’ll make it clear,” are enveloped by irresistibly jangly chord clusters, throbby bass lines and a rock-steady beat. Meanwhile, Van Duren offers up a chiming version of “Torch Song.” James Booth, along with Carmine Appice, Scrote, Arlan Fieles and John Montagna close out side three with the reverb-drenched scorch and skronk of “Little Red Lights.”

In the midst of this sonic maelstrom comes the album’s undisputed masterpiece, “Hello, It’s Me.” First written and recorded during the Nazz days, the original felt sludgey, soporific and dirge-like. Revisiting it on Something/Anything Todd completely flipped the script, wrapping an airy arrangement around a shimmering confluence of guitars and keys that tightly cocoon his boyishly winsome vocals. Sunny lyrics revisit a defunct romantic relationship in the form of a phone call, hopefully allowing for a little post break-up sex; “Think of me, you’d know I’d be with you if I could, I’ll come around and see you once and a while, or if I ever need a reason to smile, and spend the night if you think I should.” Here, Brent Bourgeois deftly scales the song’s peaks and valleys, coming close, but never quite eclipsing Todd’s effervescent take.

The remainder of Something is given over to the the experimental triptych of “Some Folks Is Even Whiter Than Me,” “You Left Me Sore” and “Slut” all executed in a true and wizardly fashion by Dave Schulz and Lyle Workman, the Intoxicants and John Powhida International Airport, respectively. These songs pointed Todd toward the next 50 years of following his muse.

Todd Rundgren has continued to confound and delight his fans, stubbornly zagging when zigging may kept him on the path of commercial success. Not only has he recorded 21 intriguing solo albums, he also formed the Pop/Prog combo, Utopia, scoring the ubiquitous hit, “Love Is The Answer.” He carved out a separate career as a producer, shepherding significant albums from artists like Badfinger, New York Dolls, Meatloaf, Grand Funk Railroad, Patti Smith, The Tubes, Psychedelic Furs and XTC. So, yeah, he should’ve been inducted a couple of decades ago.

Recently, in the opening episode of And Just Like That (the new reboot of Sex And The City,) Todd’s “Hello It’s Me” was featured at two pivotal scenes, once, as Carrie and Big share a moment of domestic bliss, and later following a shocking tragedy. It conveyed the stunning versatility of a song that can feel whimsical and playful one minute, poignant and heartbreaking the next. Fernando Perdomo has always understood that duplexity in Todd’s music. Someone/Anyone lovingly pays homage to his labyrinthine legacy. (All net proceeds from Someone/Anyone will go to Todd Rundgren’s “Spirit Of Harmony” Music In The Schools Charity).