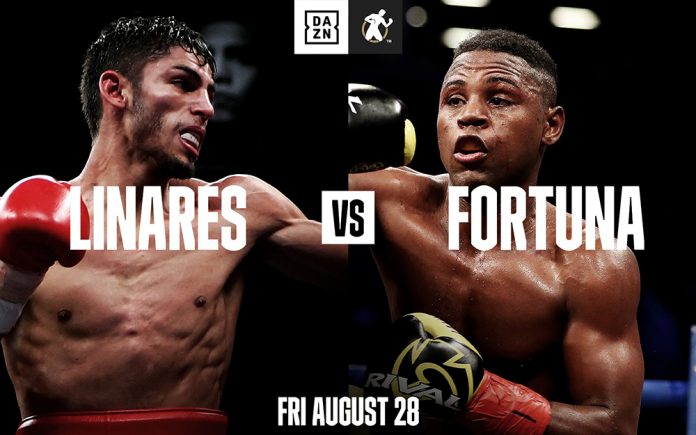 Golden Boy Boxing returns to Fantasy Springs Resort Casino on Friday, August 28th with Jorge “El Niño de Oro” Linares (47-5, 29 KOs) taking on Javier “El Abejon” Fortuna (35-2-1, 24 KOs) in the 12-round main event for the WBC Diamond Lightweight Championship. As with the recent July 24th event, the bout will be closed to spectators but will be streamed live on DAZN.

“Linares’ legacy as a future Hall of Famer is etched in stone, but he’s not done yet,” said Golden Boy Chairman and Oscar De La Hoya. “On August 28th, he’s in for a tough fight against a man who is just as quick-handed as he is, so expect both men to bring a lot of firepower.”

Linares, of Venezuela, boasts one of the most impressive resumes of any active fighter. The 34-year-old has earned world titles in the featherweight, super featherweight and lightweight divisions, facing some of the sport’s toughest competition. After a dominant performance against Carlos “The Solution” Morales in February, Linares is eager to impress.

“I’m ready to return to the top of the lightweight division,” said Linares. “I hope to provide everyone with a bit of diversion and excitement as I get closer to regaining my throne as the king of the 135-pound division.”

Fortuna, 31, is currently ranked No. 1 by the WBC in the lightweight division. The Dominican Republic native is a proven veteran who captured the interim WBA Featherweight Title against then-undefeated Patrick “The Punisher” Hyland in 2012, and beat Bryan “El Tiquito” Vazquez in 2015 to capture the WBA Super Featherweight Title. In his last outing, the southpaw dominated former champion Jesus “El Jinete” Cuellar.

“Don’t make any excuses on fight night,” Fortuna said of his opponent. “Come ready for war because that’s what I’m going to do.”

“Rashidi Ellis is a big problem for everyone at 147 pounds,” said De La Hoya. “He may very well have the quickest hands in boxing, and he’s eager to fight the very best in the division.”

The 27-year-old Ellis has yet to taste defeat since making his professional debut in 2017. The Lynn, Mass. native previously held the IBF North American Welterweight Title, and now holds the WBA Continental Americas Welterweight Title, which he earned via unanimous decision in his rematch with Eddie “E-Boy” Gomez.

“I’m finally back in the ring on August 28th, said Ellis. “And I’m happy that it will be at my favorite place, Fantasy Springs Resort Casino. Brad Solomon is coming off some very tough challenges, but I’m coming to make a statement. I’m going to show that I’m the best in the welterweight division and that I’m ready for a title shot. Stay tuned!”

Solomon, a 36-year-old veteran, previously earned wins against the likes of  Freddy “The Rail” Hernandez and Adrian “El Tigre” Granados. The Lafayette, La. native is coming off back-to-back losses to Vergil Ortiz Jr. and Alexis Rocha, but looks to climb back to the upper echelon of welterweights.

“I want to tip my hat to Golden Boy for bringing me back on one of their shows,” said Solomon. “In this fight, I’m going to prove myself. I’m going to show the sport of boxing that I’m back. I’m going to put my career back on top where it’s supposed to be.”

Uzbekistani wrecking ball Bektemir “Bully” Melikuziev (5-0, 4 KOs) looks to continue his rapid rise up the 168-pound rankings as he defends his WBA Continental Americas Super Middleweight Title against Alan Campa (17-5, 11 KOs) of Sonora, Mexico in a 10-round clash.

Marlen Esparza (7-1, 1 KOs) of Houston returns after her first and only defeat in an eight-round flyweight bout against Jacky Calvo (12-5-1, 1 KO) of Mexico City. Mexico.

For more information, visit www.goldenboypromotions.com and