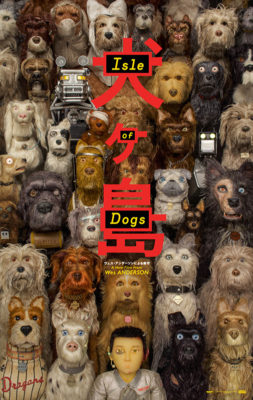 I love Wes Anderson’s quirky and artfully crafted films.  He has a knack for extolling and exploring a lost world of childhood. His latest masterpiece (yes, masterpiece) lauds man’s best friend in a striking, visually rich stop-motion cinematic work of art.

There’s a lot of emotion and truth about love, loyalty and bravery in a world of underdogs and misfits.

Writer/director Wes Anderson has fashioned a compelling tale set in Japan when an outbreak of canine flu leads all dogs to be quarantined on an island of garbage. A boy journeys there to rescue his dog Spots (voiced by Liev Schreiber), and gets help from a feral pack of similarly exiled canines. The boy’s brave quest inspires a group of dog lovers to expose a government conspiracy. The extraordinary voice cast also Bryan Cranston, Edward Norton, Bill Murray, Scarlett Johansson, Tilda Swinton, Bob Balaban, Greta Gerwig, and Yoko Ono (!).

Don’t miss this wonderful, joyous, film.  You have not seen, or heard, anything like it.  This is certainly among Anderson’s most heartfelt, and meticulously crafted films. 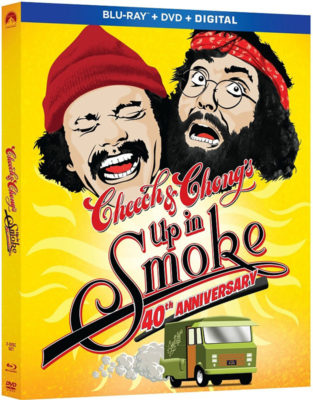 The ultimate stoner comedy is celebrating its 40th anniversary.  The high-larious cannabis culture epic debuted in 1978 when Cheech Marin and Tommy Chong made not only their feature film debut based on their now legendary comedy routines of the early 70s — their albums sold over 10 millions copies — but also invented a new film genre.  “UP IN SMOKE “ became a smash hit, establishing the pair as the reigning comedy duo of a new generation.

Today, the film still has fans rolling in the aisles and maintains a surprising cultural relevance four decades after its original release.

A plethora of generous extras includes a terrific commentary by Cheech Marin and director Lou Adler, also an original soundtrack CD and vinyl LP plus oversized and usable “Up in Smoke” rolling papers and much more.  Paramount. Blu-ray. 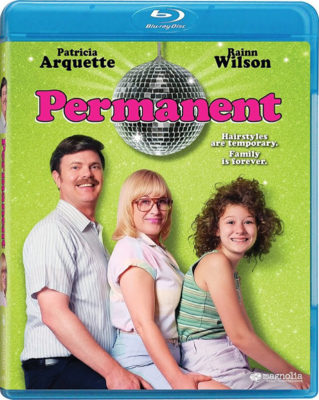 The Dicksons, both individually and collectively, are struggling through major life changes, including adolescence, bad hair and extreme social awkwardness all the while while desperately trying to emerge intact and sane on the other side.  This whimsical coming-of-age comedy written and directed by Colette Burson has its charming and modestly rewarding moments but is not in the same league as “Little Miss Sunshine” or “Napoleon Dynamite.”  The main problem in this triune ensemble of unhappy characters with low self-esteem and lack of self-confidence is that there is no clear goal, neither is there an identifiable antagonist or force holding them back.  The choppy narrative suffers from a lack of structure, clear theme and sympathetic protagonists.  The acerbic, self-deprecating Rainn has some funny lines and a bad wig as a retired steward of Air Force One now taking pre-med classes.  Arquette charms as a good mom and lonely wife who makes the most of what appears to be an amazingly life-like fat suit – or not.

The funniest thing about this movie is the awkward family photo ad art of the three principle family members sitting scrunched up saddle-like on a piano bench.  Brilliant.  Too bad the movie is not up to this high standard.  Magnolia. 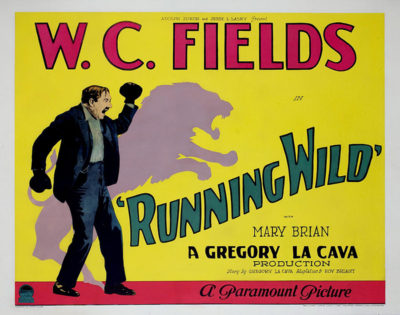 Cowardly accountant Elmer Finch (W.C. Fields) is a milquetoast, browbeaten by his wife, daughter, fat son and even the family dog.

When he accidentally throws a horseshoe through a window, the cops are on his tail, and a ridiculous chain of events puts him under the thrall of hypnosis, where he believes himself to be a lion. With his newly leonine strength he visits everyone who shamed and bullied him, and tries to get a raise in the process. Written and directed by the legendarily wit Gregory La Cava (“My May Godfrey”), “Running Wild” still delivers big laughs.

Fields (sporting the odd little mustache he favored in his silent films) is always a delight to watch, especially when venting his pent-up rage against his impossible family.

The great looking transfer was mastered in 2K from 35mm film elements preserved by The Library of Congress.  The fascinating commentary is by film historian James L. Neibaur, author of W.C. FIelds and His Films. The fitting new piano score is by Donald Sosin.  Kino Lorber. Blu-ray.