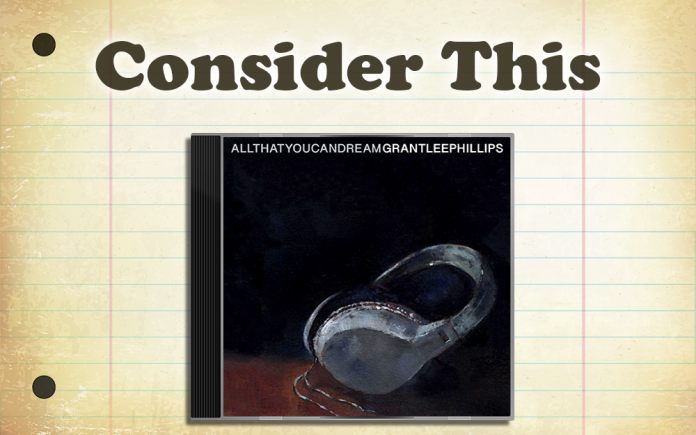 Grant-Lee Phillips is playing a solo set at The Alibi on Wednesday, September 21st, at The Alibi. This isn’t his first PS gig, neatly 30 years ago, along with his band, Grant Lee Buffalo, he played an outdoor show along with Alice Donut, back in 1993 (who among us, doesn’t wax nostalgic when we recall Alice Donut?). Grant-Lee is currently touring in support of his 11th solo effort, All That You Can Dream.

Back then, the Stockton, Ca. native (born Bryan G. Phillips), was the front-man for the L.A. based, Alternative/Roots Rock trio, which included multi-instrumentalist Paul Kimble and drummer Joey Peters. Signed to Slash Records, their debut, Fuzzy, had recently arrived, to plenty of critical acclaim and industry buzz. A few years earlier, he had walked away from his film studies at U.C.L.A. to concentrate full-time on his former band Shiva Burlesque (which coincidently had the same line-up as GLB).

Grant-Lee quickly embarked on a solo career. His debut, Ladies Love Oracle, arrived in January 2000. From then on, he released new music at a furious clip. Mobilize was released in 2001, Virginia Creeper, three years later. He recharged his musical batteries in 2006 with nineteeneighties, a collection of favorite ‘80s covers, Streangelet popped up a year later. During this era, he’d raised his profile considerably, as a recurring character on The Gilmore Girls. On the acclaimed series, he portrayed the Town Troubadour, singing on the streets, always on the periphery of the action. His songs often served up trenchant commentary underscoring the drama du jour involving Rory, her mom Lorelei and the eccentric denizens of Stars Hollow.

Even as the series ended in 2007, he continued to write and record new music. 2009’s Little Moon, was a droll celebration of fatherhood. Three years on, Walking The Green Corn paid homage to his Creek, Blackfoot and Cherokee heritage. The Narrows, released in 2016, reflected his recent move from L.A. to Nashville. (That same year, he also reprised his Gilmore Girls role on the four-part miniseries that aired on Netflix). Two years later he was back with the politically charged Widdershins. Although 2020’s intimate and introspective Lightning, Show Us Us Your Stuff, arrived at the height of the pandemic, it had been written and recorded a few weeks before the world stopped turning. His typical modus operandi has always been to write his next album on the road. Since that wasn’t an option this time out, he recalibrated his work routine, sticking close to home and finding inspiration by taking daily drives to the Tennessee countryside with his family. The result is All That You Can Dream. The record springs to life with “A Sudden Place.” Strummy guitars, swoony strings, lowing bass, and tender piano notes are tethered to a chunky beat. Grant-Lee’s whispery croon caresses lyrics that urge us to take nothing for granted; “The world’s a sudden place, it turns on a dime, and the night falls so suddenly, this time/Such interesting times, we say it like a joke, reminds me even Notre Dame can go up in smoke.”

Much of the record was written in late 2020 and early 2021. Grant-Lee has never been overtly political, but between the worldwide pandemic, myriad crises at the border, election upheaval and the insurrection at the Capitol, the global tsuris was difficult to ignore. Several songs address these turbulent times.

First up is “Cruel Trick.” Lithe guitars wash over nimble bass lines, snake-charmer keys, shaky percussion and an acrobatic beat. Covid is raging and the world is at a standstill; “The marquee is bare at the movies, there’s nothing to see, I miss the dumb places, but mostly the feeling you get when there’s somewhere, when there’s somewhere to be.” As the lyrics quietly convey a quixotic mix of foreboding and ennui, the soporific melody follows suit, until Grant-Lee cuts loose on the stompy chorus; “Feels like a cruel, cruel, cruel trick on the heart, if there’s a cure for it, stick out my arm, but it’s a cruel, cruel, cruel trick of the heart.”

On “My Eyes Have Seen,” churchy piano chords lattice quivery Chamberlain, shadowy bass, and thundering percussion. The moodily elegant melody lands halfway between “The Battle Hymn Of The Republic” and Leonard Cohen’s “Hallelujah.” Despite Grant-Lee’s ecclesiastic delivery, lyrics offer a stinging rebuke to the former Taint-Stain In-Chief’s immigration policies: “On foil blankets strewn beneath the bridge, the sleepless and the desperate are hid, the mighty with our dogs and razor, a fence around this country where you live.” His eyes are most certainly not seeing the glory of coming of the Lord, instead, he paints a vivid portrait that exposes The Grand Old Party’s blatant hypocrisy and crimes against humanity; “And all these prideful slogans are but cloth, our hands are stained, the color’s coming off, the lies we tell ourselves devour us, until we can’t remember what is lost.”

The treasonous activities that took place on January 6th, 2021 thread through three cuts. “Peace Is A Delicate Thing” is a somber slice of boots-on-the-ground reportage, Dylanesque in its execution. Feathery acoustic notes partner with bleak bass lines, doom-y keys and an off-kilter beat. The dirge-like melody perfectly accentuates this tense communique; “Wolves in the chamber, rage in their eyes, scandalous hours, the violence of lies, we’re all walking a razor’s edge/Choirs of anger a horrible dream, windows shattered, a rifle that sings and tears through the heavens, all the white stars ricocheting.” Downcast guitars cascade over the chorus juxtaposing the hatred and righteous indignation as he notes this wrong-headed revolution is “only a mirror, a reflection of us, the deeper you peer, the worse it becomes.” Meanwhile, “Rats In A Barrel” takes a more jaundiced view. A rippling drum salvo folds into acoustic notes that pivot between plangent and prickly, alongside tensile bass and shaker percussion. No compassion and zero fucks given for lemmings who still “believe what some liar said.” The consequences are real; “Hear them pleading and looking scared, ‘took my marching orders from that man up there,’ hear them pleading how ‘I got caught up,’ but ya can’t throw punches when you’re in the cuffs.” On the break, caustic, staccato guitar riffs underscore the indifference and antipathy, as he concludes “I’m done with mercy now, I’m all tapped out.”

This traitorous triptych concludes with “Cut To The Ending.” Painterly piano wraps around willowy guitars and a propulsive beat. This brittle post-mortem opens with the aftermath; “Now we’re left to pick up the pieces, shovel up the shards, because a fool won’t listen to reason ‘til he’s gone too far, ‘til he’s gone too far.” Not only do lyrics take aim at the gutless sycophants that allowed such tyrannical behavior to flourish; “History is told by an old man who survived the wars, little talk of spineless enablers, ones who held the doors/And knelt to kiss a ring, held onto power by any means…,” they also warn it could easily happen again; “I’ve seen some ugliness, some terror in my days, I’d love to think I’ve seen the end, but when you think you’ve got the lid on, here it comes, the same old ghosts are back again.”

Don’t get the wrong idea, All That You Dream isn’t some tedious treatise that only focuses on that burnt orange, twice-impeached, disgraced former despot President. The record is dotted with tender moments as well. Take Cannot Trust The Ground which is powered by courtly Spanish guitar, debonair bass lines and a ticklish beat. Despite the worldly sturm und drang, this song celebrates the quiet moments; “There’s a comfort in the simple things, put a kettle on the stove, keep an ear out for the whistle when you hear it blow…” or how we’ve graciously accept the new normal; “At the kitchen table school begins, she’s got her face up on the screen, can’t imagine how it feels to be thirteen.” On the break, burnished guitars gently meander in and around the languid melody.

Then, there’s the title track, which weds melancholy piano chords to sparkly guitars, tripwire bass and a mercurial beat. Grant-Lee’s voice is suffused in sadness, drifting into falsetto ache on the chorus, which repeats the title like a mantra; “All the love that you can dream, all that you can dream.” As the arrangement shapeshifts, shuddery percussion is added to the mix, as cryptic lyrics decry the pursuit of wealth at the expense of kindness and humanity. He quietly insists “A part of us is broken.”

Finally, there’s the minor key masterpiece, “Remember This.” Anchored by Honky-Tonk piano, sunshiny acoustic guitars, ringing electric riffs, flinty bass, agile percussion and a buoyant beat. The lyrics are a love letter from a father to a daughter, sans any “Cats In The Cradle” angst; “We don’t always have to think the same, not a crime to disagree, doesn’t mean we have to turn away, doesn’t mean we’re enemies…Hardest thing is when I see you hurt, I wish that you would tell me why, When you need me, simply say the word, I’m here to hold you when you cry.” Jingle-jangle guitars ring on the break, briefly making room for some weepy pedal steel.

Other interesting songs include the piano-driven “You Can’t Hide,” which blends gossamer guitars, shimmery keys and wistful vocals. The record winds down with the thump-thump-strum of “All By Heart.” A lament that’s equal parts sweet and sour.

Once again, Grant-Lee relies longtime cohorts like bassist Jennifer Condos and drummer Jay Bellerose to flesh out his sound. As well as Jaime Edwards on keys, pedal steel from Eric Heywood and cello provided by Richard Dodd. This time it was a socially distant affair, with all the participants recording their parts from their own home studios.

Despite its topicality, there’s something kind of ethereal, and yes, even dreamy about All That You Can Dream. Grant-Lee remains wistful and contemplative even as he drills down on the hard truths and unhappy endings. Somehow, knowing, that in these emotionally bankrupt and dystopian days, the only true currency is love. (Grant-Lee Phillips & Jarrod Dickenson, Wednesday, September 21, 2022. 8pm. 369 N. Palm Canyon, Palm Springs. www.thealibi.com)