The trio was inspired by the success of East Bay Punk/Ska outfit Operation Ivy. Musically, they took their cues from ‘70s Punk progenitors the Ramones, the Clash, Buzzcocks, Sex Pistols and Stiff Little Fingers. They began gigging regularly at 924 Gilman St., the all-ages performance space located in Berkeley.  Lookout! Records founder Larry Livermore caught a set and signed them to his label.

Relentless touring on both coasts and everywhere in-between resulted in increased visibility.  Once sales approached the 50,000 mark major labels came a-courtin’. The three-piece signed with Reprise Records, part of the massive Warner Brothers label group. They headed back in the studio with producer Rob Cavallo.

Recorded in just three weeks, Dookie arrived in February, 1994. Videos for “Longview,” “Basket Case” and “When I Come Around” quickly went into heavy rotation on MTV.  Mainstream radio took notice and by the end of the summer, the band was added to the line-ups of Lollapalooza and Woodstock ’94.

For the remainder of the 20th century the trio could do no wrong, Insomniac was released in late 1995 followed by Nimrod in 1997.  The  latter included a  contemplative, string-laden ballad, “Good Riddance (The Time Of Your Life),” that became a crossover hit, playing on M.O.R. radio and scoring touchstone moments on  television series like “ER” and “Seinfeld.” Unfortunately, the trio exhibited a bit of creative burnout with the 2000 release of their sixth effort, Warning.

Two compilation albums, International Superhits! and Shenanigans arrived in 2002.  The following year the band was hard at work recording their seventh album, tentatively titled Cigarettes And Valentines. Twenty tracks had been completed when the master recordings were stolen from the studio. Instead of trying to recreate them, Green Day started over from scratch. The result became their masterwork.

American Idiot, was released at the tail end of the 2004 Presidential election. Surprisingly political, the concept album and Punk Rock Opera follows the saga of Jesus Of Suburbia. Torn between love and rage, the songs touch on the fallout from the Iraq war, culture wars, and the divisive legacy of George W. Bush’s presidency.

Expanding on the template the Who created on song-suites like “A Quick One” and seminal works like “Tommy” and “Quadrophenia,” Green Day hit the jackpot, both creatively and commercially, receiving rapturous reviews, debuting at #1 on the charts. It was nominated for five Grammys, winning one for Best Rock Album.

In 2009, the band doubled down on the formula with another concept/Rock Opera, 21st Century Breakdown. This one hewed more closely to Bruce Springsteen’s songs of hope and redemption, following a couple named Christian and Gloria as they deal with economic depression, fundamentalist religion and the aftermath of George W.’s presidency. The album shot to #1 in America as well as the rest of the world.

Three years later it felt as though Billie Joe Armstrong’s workaholic habits and wildly ambitious vision had completely over-taken the band. Recording a surfeit of music, Green Day planned to release a trilogy of albums, whimsically entitled Uno!, Dos and Tre, the records were released over a three month period.  The band was performing at the IHeart Radio Festival in Las Vegas when Armstrong had a bit of a meltdown on stage. Soon after, he checked into rehab.

Armstrong later admitted he had been trying to quit drinking since the Nimrod album was released. Prior to the festival “I was at my pill-taking height at that time, medicating the shit out of myself.” In 2013 the band finished the tour commitments they had postponed and took an extended break.  (Of course Armstrong spent part of his off-time recording a side-project with Norah Jones. A collection of Everly Brothers covers entitled “Foreverly.”) 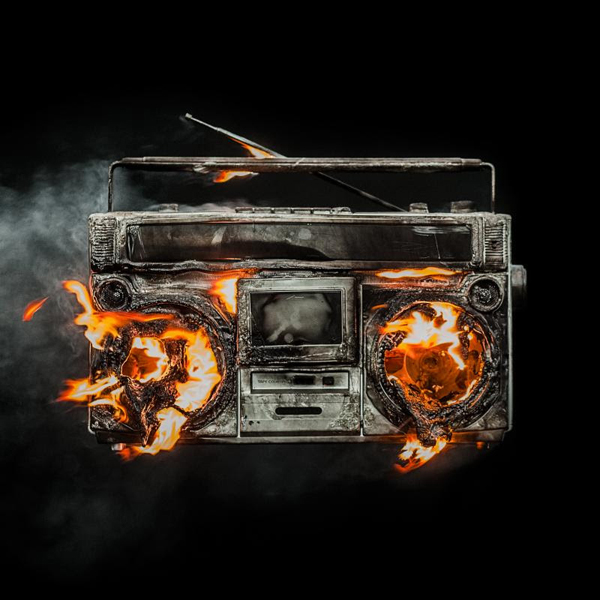 Now the trio has returned with their 12th album, Revolution Radio, and it feels like a welcome return to basics. The first three tracks blast out of the speakers guns blazing. Each offers a study in contradiction.

“Somewhere Now” opens tentatively as sun-dappled acoustic guitar lattices over Armstrong’s earnest confession; “I’m running late to somewhere now  that I don’t want to be, where the future and promises ain’t what they used to  be/I never wanted to compromise or bargain with my soul, how did a life on the  wild side…ever get so dull?”

“Bang Bang” is a pummeling percussive assault blending locomotive rhythms and blitzkrieg guitar.  Slipping into the skin of a gun-toting psychopath,  the lyrics offer a casual manifesto of misanthropy and narcissism. “I want to be a celebrity martyr, the leading man in my own private drama/Hurrah, hurrah the hero of the hour, daddy’s little psycho, mommy’s little soldier.” Suddenly the frenzy powers down, locking into a Johnny-Comes-Marching-Home cadence before a final drum fusillade crests over the melody.

Guitars careen out the speakers with the intensity of air-raid sirens on the title track. Switchback bass lines collide with a jackhammering beat, and the lyrics take aim at media, social and otherwise that prioritizes celebrity infotainment over actual news stories. “Give me cherry bombs and gasoline, debutantes in surgery, and the headline ‘legalize the truth.’”

Both “Outlaws” and “Youngblood” traffic in nostalgia. The former opens with bludgeoning guitar and marauding bass lines before downshifting into a wistful recollection of Green Day’s hardscrabble beginnings; “We were outlaws of redemption, baby hooligans, we destroyed suburbia.”  The track plays out like a Punk Rock “Bohemian Rhapsody” as the arrangement veers from quiescent to stentorian from one verse to the next.  Building to a stunning crescendo, the final denouement is a lone piano-vocals coda.

The latter is a balls-out Valentine to Armstrong’s wife, Adrienne. The pair has been married 22 years and have two nearly grown sons. (Now that’s an oxymoron: Punk Rock empty-nesters!) Over an infectious handclap rhythm and search & destroy bass runs, guitars roar and retreat. The lyrics chart the course of love at first sight; “I’m a rough boy around the edges, getting’ drunk and falling into hedges/She’s my weakness, fuckin’ genius, swear to God and I’m not even superstitious.” Her resilience is sketched out in just a couple of lines: “Are you broken like I’m broken, are you restless? She said ‘Fuck you, I’m from Oakland!’”

The best tracks here offer a seamless fusion of social commentary and Punk rebellion. First up is the stompy, Glam-tastic crunch of “Say Goodbye.”   Buzzy guitar riffs ride roughshod over a militaristic meter and sing-songy vocals. Inspired by the events that transpired in Ferguson, Missouri and the Black Lives Matter movement that sprang up around it, the lyrics never explicitly take sides, they just lament the current culture of violence.

Anchored by a triple-time tattoo, rippling guitar licks and sinewy bass, the effervescent melody and instrumentation on “Still Breathing” belies this urgent tale of survival on the mean streets.  Lyrics like “I’m like a son that was raised without a father, I’m like a mother barely keeping it together,” touch on Armstrong’s own latch-key kid childhood.

Downstroke guitar riffs give way to bulldozer rhythms on “Troubled Times.”  Pointed questions like “Where’s the truth in the written word, if no one reads it?” seems to foreshadow our current disdain for traditional journalism. Forsaking accurate news sources, we embrace a puerile   Twitter-scape where 120 characters manage to push radical agendas in lieu of impartial reportage.

Other interesting songs include the scorching “Bouncing Off The Walls” and the rubbery “Too Dumb To Die.”  While Armstrong has tempered his ambition for most of Revolution Radio, he truly lets his freak-flag fly on “Forever Now,” the album’s three-part magnum opus.

Opening with distorto power chords and a manic pogo rhythm, Part 1 paints a picture of emotional paralysis.  Part 2 adds layers of guitars that ring like a clarion call, nearly blunting dour sentiments like “if this is what you call the good life, I want a better way to die.”  Part 3 circles back around incorporating the themes of alienation explored in the opening track, “Somewhere Now.” It even recycles that same winsome melody. Over a squalling guitar solo the last line offers a simple declaration of independence; “I ain’t gonna stand in line no more.”

The album closes with the tender benediction of “Ordinary World.” Sweet and spare, it’s simply jangly acoustic guitar and Armstrong’s affecting croon. It almost succeeds in washes away the sturm und drang of the preceding 11 tracks.

The three-piece produced the album themselves in Armstrong’s Otis studios.  While the lyrics, melodies and instrumentation is completely on point, Tre’ Cool deserves special recognition for attacking his kit with feral ferocity.

Somehow nearly 30 years in, Green Day has managed to become the elder statesmen of Punk.  They’ve distilled the brash simplicity of the Ramones, the wiry tension of the Buzzcocks and the social conscience of the Clash into a style that’s completely their own. Revolution Radio is a testament to their tenacity.