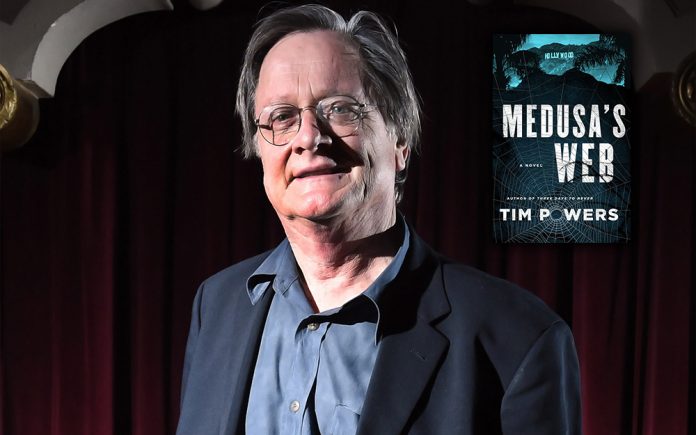 Although “Hollywood” has changed over the last several decades, it still has an aura, and one can feel the excitement and magic the industry still possesses.  Blast back to the distant past, and the film industry in California must have felt like a dream.  In Tim Powers’ Medusa’s Web (William Morrow, 359 pages), the golden age of Hollywood is alive and well.

The story is about siblings Scott and Madeline Madden who return to their childhood home after their Aunt Amity’s suicide.  They, along with their two cousins, Arial and Claimayne, are expected to inherit the huge, decrepit estate in the Hollywood Hills.

Neither Scott or Madeline is interested in the property.  They are only returning to honor their aunt’s wishes and see the old place one last time.  As kids, the siblings lived in the mansion with their parents.  But one day, their folks disappeared without a trace.  Aunt Amity raised the children until they left as young adults.

As Scott and Madeline take residence in their old bedrooms, they begin to remember some of the strange things that happened in the house.  Their cousins Arial and Claimayne are mean and seemingly up to something.  As adults, they now question what actually happened to their parents.

The siblings soon come to understand the house is haunted.  Not by ghosts exactly, but by other entities who lived in Hollywood since the silent age of films.  Somehow, these people from the past are all connected to their Aunt Amity and are living in other realms.

Madeline is excited by what she discovers and remembers how comforting spending time with the strangers was to her.  She met Rudolph Valentino and fell in love with him.

It turns out an ancient Medusa and its spider-like tendrils have an hypnotic affect on the family.  Any one who sees an eight-legged image is transported into another time.  All the cousins are cast into other’s lives and walk in their shoes no matter the era.  There they witness first-hand a strange yet familiar world.

This is a wonderful haunted house story!  The Medusa and the spider image is convoluted, abstract and difficult to explain, but very creepy and bizarre.  I liked that the siblings are not terribly afraid, because they knew their aunt loved them.  So what’s there to be frightened of? Plenty, if your aunt is looking to move into your body to live another 80 years!

When Madeline is possessed by her aunt, Scott knows they better get out while they can.  But Madeline wants to stay in hopes to meet up with Valentino again.

Meanwhile, the cousins are using the “spiders” like a fountain of youth and hallucinogen.  Good guys and bad want to get their hands on the ultimate spider, which is in Scott and Madeline’s head. It could be the answer to immortality or open more portals.  But for Claimayne, his body is failing and he needs a new vessel — the siblings might be perfect to inhabit.

What kept me really involved was the big house and its Hollywood location.  There is a chase scene that travels all over the area crossing the 101 Freeway, Fountain, Sunset Blvd, Hayworth, and so on.  It’s a lot of fun to be back in LA and on the streets of Hollywood.  Even better, I loved when the siblings went back into time before freeways and skyscrapers, when Hollywood was a small village of studios and there were quaint bungalows and beautiful, old, sprawling mansions tucked in the hills.

The multi-dimensional world is not always easy to make work, but I believed these people from the past still existed in present time.  I wanted more of their lives and their connection to the aunt Amity.  There was much unfinished business and loose strings, but overall, I was satisfied that the siblings survived and even found happiness in the end.  I only wish they kept the property and the haunted Hollywood home so we could revisit the people and places.