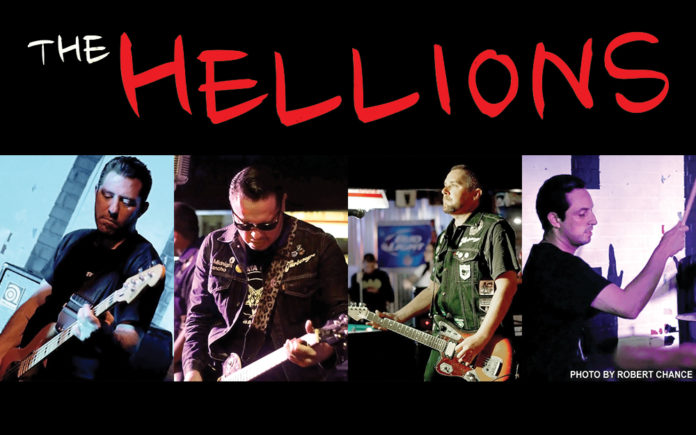 The Hellions have been part of our music scene for almost 20 years.  They’ve played every venue the desert has and played with most local bands.  This year, they have the honor of being the only band to play every Concert for Autism.  That’s 10 years straight.  True, Josh Heinz, the founder of the Concert for Autism, has played all 10 years as well, but with 2 different bands.  The Hellions were gracious enough to sit down with us and share their memories of this awesome benefit concert.  These dudes wanted to stress how important this concert is.  They are extremely grateful to be a part of Concert for Autism and hope to continue playing it.  They’ve seen it grow from passing around a water bottle for donations to an unparalleled silent auction from tons of local companies.  Josh Heinz and his super talented wife, Linda Lemke Heinz, are no strangers to autism and have made this benefit show grow exponentially from ten years ago.  Make sure to make it to The Tack Room Tavern on Friday, October 13 and Saturday, October 14 for two music filled nights supporting a great cause.

Coachella Valley Weekly:  You guys have been a part of the Concert for Autism since the beginning.  That’s 10 years now.  What is it that keeps you coming back?

Angel Lua (Guitars and vocals): “It’s important to us to help out our friends, especially with how autism directly effects them.  They’ve been really involved and have asked us to do it what… 10 Years ago?  And we’ve continued to do it.  It’s an amazing cause and supports amazing people.”

CVW:  You guys are the only band that have done it all 10 years right?

Jamie Hargate (Guitars): “Actually, Josh has been doing it all 10 years too, but I think the first 2 years was his previous band Dufreign, then Blasting Echo… so yes, we are the only ‘band’ to do it.”

Angel:  “I think Josh invited us to play the first one late, so we weren’t on the flyer, but we played it.  Those were our dark days.  It was hard to remember a lot from back then.”

Travis Rockwell (Bass):  “Things were fuzzy back then.”

Bob Llamas (Drums):  “I’m actually surprised we were asked to play.  We thought it would be more family oriented and his coworkers and stuff.  But it was at The Red Barn so… Back then, they were just passing around a bucket or something.”

Jamie:  “It was those big water bottles… Arrowhead bottles.”

Bob:  “That’s how it started.  They did that the first few years I think.  It’s been cool to see it change through the years.”

CVW: There are a lot of bands playing, some of which you guys don’t normally get to see.  Is there anybody you’re excited to see?

Angel: “I’m kinda looking forward to seeing Giselle Woo.  I’ve heard a lot of good things about her and I haven’t had a chance to see her perform.”

Jamie: “Yeah… Friday is going to be good.  Faults of Andreas, Mighty Jack, and Throw the Goat.”

CVW: Are you guys going to play any new songs?

Angel: “We definitely have 2 new songs we are playing.  One’s 5 years old, so new for us.  One is brand new.  We may play a third.  We’re hoping to record a new album at the end of summer next year…”

Jamie: “That’s how The Hellions roll.  Look for the new release on the 30th anniversary!”