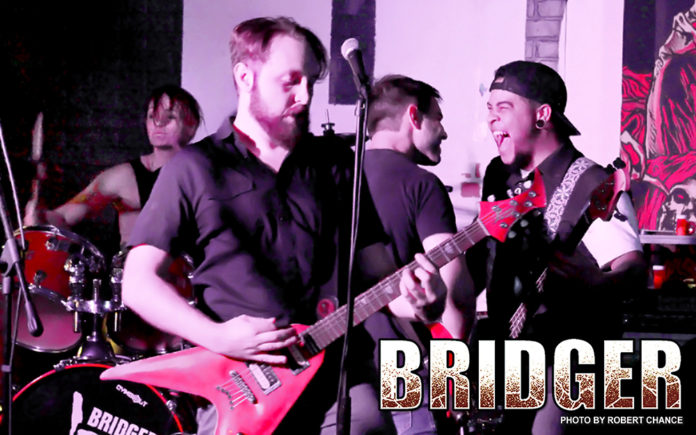 You know it’s a great day at work when you are tasked with interviewing and writing about one of your favorite bands…members of which all happen to be your buddies. I first saw Bridger around 3 years ago at The Red Barn. My love for them as musicians was instantaneous and I have never truly recovered. Their ability to mix genres such as punk, rock and metal is apparent and skillfully done. This band has won multiple CVMAs and every member has received multiple nominations and/or awards since the CVMAs inception five years ago. They were also finalists in the nail-biting battle that was Tacheva Fest.

Accolades aside… One of the best qualities this band has is the humor they sprinkle into just about everything they do. When Bridger makes, “music babies” (a quote from drummer Katie Zapcart) they are doing it because it’s fun. That fun is contagious and the reason why a Bridger show will always leave you with a smile on your face and possibly a neck injury from how hard you rocked out.

CV Weekly: So let’s talk about the origins of Bridger. How long have you been a band?

Jim Cathcart – Leadvox/Guitar:  “We tend to lose track of how long we’ve been a band as it always seems like we’re working to improve what we do; maybe 4 years at this point, but it still feels new to us.

CV Weekly: So you haven’t done any shows in a while. I know Jim lives in LA most of the time and Dan spent some time in Europe. Was this a hiatus?

Jim Cathcart:  “Never a hiatus, we just took a summer vacay to work on music and grow as a band. I still come down almost every weekend when I can and now that the fall is here we’ve been prepping for new shows. Our last show was Tachevah finals at the Date Shed, we had a killer time and the crowd’s energy during our set was equally reciprocal and rad/appreciated. Dan set off for his Austrian adventure the next day. We’re ready for action again.”

CV Weekly: So let’s digress back to Bridger’s origins. How did you all get together and become a band?

Jacob Miller – Guitar: “Jim and Katie met shortly after the womb,(them being siblings and all) Dan and I met in the cove in 07 in an old band. Eventually, my brother introduced me to Katie sometime around  09 or so.”

Katie Zapcart – Drums/Vox: “We knew each other from around the valley and there was an opportunity for us to all jam and have some fun. Jacob and I got to play with Dan first and told Jim we had to all get together that weekend. It was so rad that we wrote our first song during that first get together. No one wanted to stop and we haven’t since. We do what we want and BRIDGER is what comes out. Oh man… I love these guys.”

Dan Dillinger – Bass: “I’ve known of the Cathcart’s and Jacob since high school. I saw them play a few times, but one time in specific was at Red Barn during the time I was in Remnants of Man. I had been bugging Katie for months to play music together. That night, I made it very clear that it needed to happen. She agreed. When the time was finally right, we made it happen. It was initially supposed to be just a fun jam. But after we finished up, we knew right from there that it was going to be a permanent thing.”

CV Weekly: So after your little vacay from performing you have your first show coming up at the 10th Annual Concert for Autism. Can you tell us about that?

Jim Cathcart: “Yes. I think this will be our second autism benefit as we’ve had scheduling conflicts in the past. We are stoked to be a part of it again, as the event comes straight from the kind hearts of its organizers and our dear friends. We’re excited to return to the stage…it never really leaves us as a band. A big part of Bridger is the live show. I remember reading a funny Hard Times post about ‘local band leaving it all on the stage even for a crowd comprised of the wait staff and a few regulars,’ and I thought regardless of the satire, that’s us through and through. We will always bring the best show we can, because why the hell not?”

Katie Zapcart: “Also, we are going to (for the first time) live stream this show on Facebook! We have a lot of fans in Mexico and in the military that we haven’t gotten to play for so we thought what a better night and cause to go for it. We want to make it possible for everyone to attend and see what an amazing benefit this is!!”

The 10th Annual Concert for Autism will be held Friday, October 13th and Saturday October 14th at The Tack Room Tavern in Indio, Ca. If you cannot attend you can watch Bridger’s live stream  on their facebook page on Friday at 11:30 PM. https://www.facebook.com/thebandBRIDGER