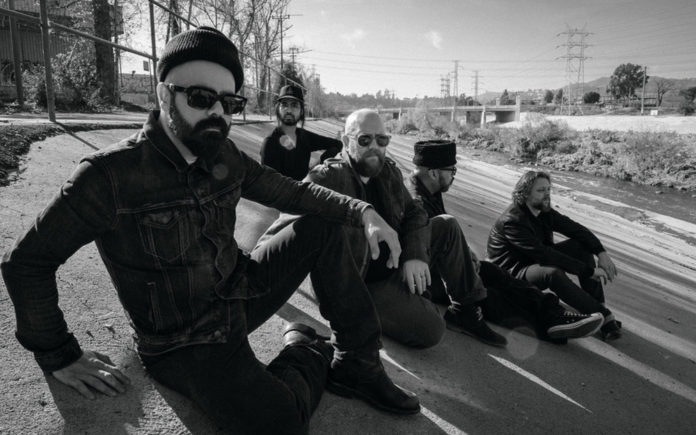 HERE LIES MAN is a Los Angeles-based quartet conceptualized and founded by guitarist/composer/arranger Chico Mann (aka Marcos Garcia) of Antibalas and Daktaris. Here Lies Man’s unique sound marries Afrobeat, a music genre dating back to as late as 1960 which involves the combination of elements of West African rhythms, and the riff-based architecture of hard rock Fuzz creating an intense danceable and first of its kind grouping.

HERE LIES MAN will be closing out the first SOUNDS OF THE HEAVY festival at Gadi’s Restaurant and Bar in Yucca Valley, CA. The party starts at 4:20 p.m.

Here is the line-up and set times:

You can purchase tickets on eventbrite.com now for $12 or $20 at the door.

Providing full backline for the show is HIWATT.

Coachella Valley Weekly phoned Chico Mann (Garcia) to get the lowdown on Afrobeat-Psych-ArtRock-Fuzz-Afrorock.

CVW: You’re performing at SOUNDS OF THE HEAVY. Have you ever played in the Coachella Valley or High Desert in the past?

Garcia: “I’m looking forward to this show. I’ve been wanting to play out there more since I moved to L.A. This is a nice continuation to reach outside of L.A. We played at the Ace Hotel Palm Springs last spring and Desert Daze in the fall. It’s been one of my goals to try and play as many places in Southern California that will have us. It was definitely a welcome invitation to play 5/24 in the desert. I love it out there. I’ve been out there a few times.”

CVW: Where are you originally from?

Garcia: “Jeff and I are both originally from New York. Jeff has been living here for 15 years and I’ve been here for close to four years.”

CVW: You’re in another long-established band. How much did that influence HERE LIES MAN?

Garcia: “I play in a 12-piece African-Funk band called Antibalas that’s been around for twenty years. Around 2005 is when I had the idea to start what would become Here Lies Man. Between Antibalas and producing, it took me a while for it to come together and then it wasn’t until I moved to L.A. and reconnected with Jeff that it finally clicked because he understood the rock references and the Afrobeat references in the music. To me, it’s the music that could have existed a while ago but I don’t think anyone put it together before. Afrobeat is based on riffs too. The guitar parts are based on riffs too. So that’s really where they intersect.”

CVW: Tell us more about Antibalas and the balance you maintain between the two bands.

Garcia: “Antibalas is the first non-African Afrobeat band and we’re pretty steeped in that music but I love rock and roll. When I had the epiphany that I should do this I was like, yeah, this is a revelation. I tour with Antibalas as well. It’s a lot to juggle but what else could I do. I live to serve the music. It’s my calling for better or worse.”

CVW: Are you surprised at the positive response from crowds and fans and their acceptance of the fusion of Afrobeat and Fuzz in HERE LIES MAN?

Garcia: “That’s been the most interesting thing to me because it feels like, whenever we play for a crowd most people don’t know us and when they hear it. I’m always pleasantly surprised at their reaction and the acceptance. It’s been really nice. I don’t know what people make of it, but it’s been positive. The response was very positive like the first release. We have another release coming in August. It’s a 30 min EP. That is a continuation of the musical and lyrical concepts of the first two albums. And I’m finishing up the demos for the next full-length which I’m hoping I can get to record this year. I need to stay put long enough to do it. I just want to keep putting out music. If it’s 40 minutes or 30 minutes, call it whatever it is, an EP, LP, XP, I just want to keep having stuff come out every year because I have the whole next full-length written and then I’ve already started writing stuff for after that. It’s a little bit of writing every day. When I’m home, it feels good. It’s like you’re exercising a muscle. The music itself is its own landscape. As I’m writing I’m discovering new things regularly, that really just keeps my interests peaking and I keep following the path to see where it goes. I like to say it’s funky and it’s still heavy. There’s no reason you can’t dance to heavy music. All the original heavy bands, they were listening to black music, they were inspired by jazz and African-American music. I think that’s been lost over time but we’re firmly planted in that music.”

CVW: What types of music have carried weight in your life/career?

Garcia: “I grew up with Punk music. What really turned me on was the first time I heard Soundgarden over 30 years ago. I had heard Black Sabbath and Metal and that was all happening when I was a kid. But when I became a teenager, hearing Soundgarden I would take on that music. That’s what got me curious. I was a teenager in the grunge era, but I will say the only band I felt deeply was Soundgarden. My dad was a record producer at a Latin record label so i grew up with all kinds of influences, Hip-Hop, Latin, Jazz, Rock and Punk. I remember being a teenager and people felt they had to identify with a certain music because that’s what people did. I couldn’t always do that. As a kid my tastes were eclectic. That’s never changed.”

CVW: What are your HERE LIES MAN and ANTIBALAS plans for the remainder of the year?

Garcia: “There’s a few run-outs for a while in California. We’ll hit Nevada City, San Diego and Santa Barbara and then summer we’re not going to be touring. I’m going to be on tour with Antibalas and recording and then come Aug/Sep/Oct we’re planning a Northwest run and working on a European tour.”

CVW: HERE LIES MAN is a fairly new band. What has the musical adventure been like?

Garcia: “I moved to L.A. in ’15. The first record didn’t come out until ’17. That took a little while. We were shopping labels with this bizarre music that no one has ever heard before. When Daniel Hall from Riding Easy Records heard it he signed us right away. It was planning the release and getting everything in order so I would say it started as a band three years ago and it really hasn’t been since the last year and a half two years that it’s been a working and touring band. It takes a while to find the right people.

The core is me, the drummer (Geoff) and the bass player (JP).”