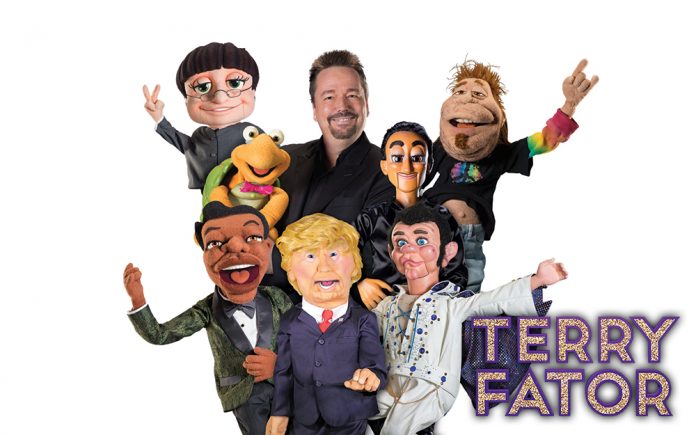 At 10 years old, when most boys his age were playing sports or reading comic books, Terry Fator got his first dummy and began immersing himself in the art of ventriloquism. It wasn’t your typical childhood hobby, but it eventually paid off — to the tune of a five-year, $100 million residency at The Mirage in Las Vegas.

“Truthfully, the main thing that attracted me to [ventriloquism] was the fact that no one else in the school was doing it,” said the now 54-year-old impressionist in a recent interview. “At the school talent shows I didn’t have any competition.”

Fator and his all-star team of puppets — including Duggie the annoying neighbor, Emma the little girl with the big voice, Monte Carlo the lounge singer, Maynard Thompkins the Elvis impersonator and country superstar Walter T. Airdale — return to Fantasy Springs Resort Casino on Friday, March 6th at 8 p.m. Each character requires the versatile performer to sing in a different voice, ranging from Garth Brooks and Dean Martin to Aretha Franklin, Lady Gaga and more.

Fator burst onto the national stage in 2007 as the winner of America’s Got Talent. His career took off from there, leading to appearances on The Today Show, The Oprah Winfrey Show, The Ellen DeGeneres Show and The Late Show with David Letterman, in addition to his Vegas residency. The Dallas, Texas native discussed his unique career and why there was never another option ahead of his performance at Fantasy Springs.

FELCI: You got into ventriloquism at a young age, when you came across a book about it for a school assignment. What about it fascinated you?

FATOR: “Obviously it was to impress the girls. Girls think ventriloquism is hot, right? Forget the football quarterback, they love the chubby teen with the puppet.”

FELCI: Right, but your success was hardly overnight — you were in your early 40s when you won America’s Got Talent. What would you be doing today had that not panned out?

FATOR: “Notice I’m the only one in show business who gives his real age. Had ventriloquism not panned out for me I’d be an entertainer of some sort. Or the shortest NBA player or tallest jockey in history. Somehow I always knew I’d entertain even from a very young age, so there was never any other option for me.”

FELCI: Talk about your favorite characters to perform and how they have evolved over time.

FATOR: “My favorite character overall is Winston the Impersonating Turtle, but my favorite to perform is Maynard Thompkins the Elvis impersonator. He’s so goofy. He’s evolved quite a bit since I created him. At first he was just a plain Elvis impersonator but then he evolved into an Elvis Impersonator who sings Aaron Neville songs. The humor is so fresh and fun to create.”

FELCI: Your show is all ages and has been named Best Family Friendly Show in Las Vegas multiple times. How challenging is it to cater material to a wide audience and how fine a line is to execute?

FATOR: “It is much more difficult to create clean, funny and sophisticated humor. The dirty joke is always a quick laugh, especially if it is a puppet doing the dirty joke, but the clean joke that was so much harder to create is much more rewarding to the writer of the joke and to the audience as well.”

FELCI: Speaking of Vegas, you’ve enjoyed a headlining residency at The Mirage for over a decade. Talk about that experience and how you keep things fresh.

FATOR: It’s been one of the greatest honors and achievements of my career to have been a Mirage headliner for so long, and I believe the secret has been that I never stop writing and creating new material and characters for my audience to enjoy. I’ve had people see my show over a dozen times and have never seen the same show twice. Of course, that was my wife Angie but it still counts, right? Just kidding. Angie’s only seen my show a couple of times.

FELCI: You’re a big supporter of the U.S. Armed Forces. Aside from the obvious reasons — freedom, bravery, courage — why is the military community so near and dear to your heart?

FATOR: “When I was young my friend’s father was a P.O.W. in Vietnam. He was tortured for seven years, and I saw him weep at how he was treated by some people when he returned to the U.S. I vowed that if I ever had a voice I would do everything I could to make sure they were never treated that way again.”

FELCI: You’re returning to the desert on March 6th. How familiar are you with the Coachella Valley and what can fans expect at Fantasy Springs?

FATOR: “I don’t think any entertainer is not familiar with the Coachella Valley. It’s legendary. I think of it as the Woodstock of the desert without all the mud. Fantasy Springs is one of my all-time favorite places to perform, and I’m bringing new characters that have never been there before and a whole new show. I feel it’s the best show I’ve ever put together so even if folks have seen me there before they really don’t want to miss this new show!”