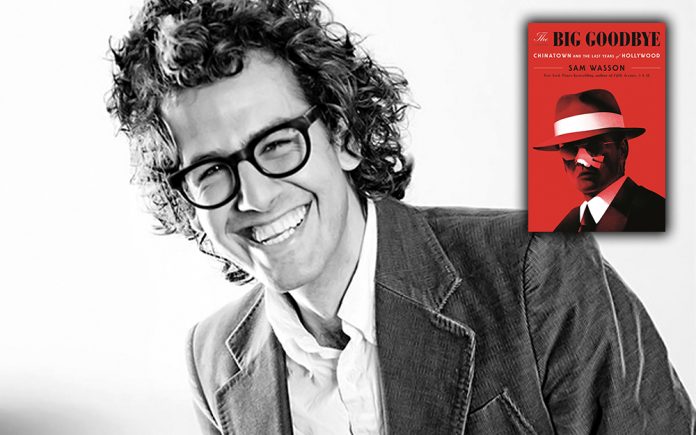 With the Palm Spring International Film Festival in full swing, film fans are immersed in movie magic and powerful stories.  Sam Wasson’s The Big Goodbye: Chinatown and the Last Years of Hollywood (Flatiron Books, 331 pages) reveals the changing nature of the film business and the art of filmmaking in the era of larger-than-life personalities both behind and in front of the camera.

Author Wasson delves into the private lives of all the major players involved and what it took to make the landmark, now classic film “Chinatown.”

The film noir story set in the mid 1930s Los Angeles, “Chinatown” is about a dapper, private detective who gets involved with a case where he quickly gets in over his head as he tries to unravel the mystery surrounding a steely blonde, her father, sister, daughter, and murdered husband, all while the city fights over water rights to serve the thirsty, growing metropolis.

The movie stars Jack Nicholson.  Robert Towne wrote the screenplay.  Roman Polanski directed the film, and the young Paramount producer Robert Evens championed the project to fruition.  All considered heavy hitters today, but at the time, they were just up-and-comers trying to figure out how to make great movies.

Wasson begins with thumbnail early biographies of the principles including the occupations of their parents and psychological traumas suffered during childhood.

The author conveys the sunny days, aromatic eucalyptus, and blue skies of 1970s Los Angeles as he drops the reader into the struggling movie industry and the emerging talent that would rewrite and save the film business.

This book multitasks in compelling ways.  It is part biography, history, LA culture, industry case study, and an exploration of the creative process.

I especially appreciated the background of the players and the way their past informed the motivations and emotional struggles to get the work done and the film in the can.

Polanski, dealing with the loss of his wife Sharon Tate at the hands of Charles Manson’s gang was chilling as he struggled with depression, while suspecting his friends of the horrendous crime.  Wasson shares how the murders changed LA culture from joyful and free-spirited to fearful and paranoid.

I appreciate the friendships and the generosity of the era as Nicholson, Towne, Evans and their Hollywood pals worked to develop Towne’s script believing in each other and what the movie could be.  Wasson shares how Towne had his good friend Edward Taylor, who for no pay, helped flesh out the story’s structure.

Evans conscripted New York Times journalist Peter Bart to help him build a vision of a studio driven by quality stories and young energetic talent.  The two would come out to Palm Springs to work.  (Peter Bart still has a home in Palm Springs.)  Bart was knowledgeable about the business of Hollywood, its celebrities and how it all worked together from his extensive reporting on the LA industry.

If you love movies and movie stars, have an interest in the industry and how it shaped Los Angeles, or if you are struggling with a screenplay, The Big Goodbye is a fun and insightful read about the business of Hollywood and the complex, creative process.

The film industry has changed since “Chinatown.”  Its culture and attitude is less friendly, brave and creative.  Narrative stories have been replaced with superhero flicks guaranteed to fill studio coffers.   But it is just another era, another iteration of a business that continues to evolve.

The Hollywood that brought “Chinatown” to the big screen is gone.  Today, Hollywood is not a place, but a state of mind – much like the Chinatown metaphor depicted in the film.