Hope Sandoval never seems to be in a hurry. That works within the confines of her music, which can be languid, seductive and mesmerizing. But it’s wildly frustrating for her fans. Over a nearly 30 year career, she has basically released only six albums. Born in 1966, Hope grew up in East Los Angeles, the youngest of 10 children. Raised in an eclectic household, she was exposed to disparate musical styles; everything from Jazz, to Spanish to Country.  Hope gravitated toward the city’s nascent Punk scene. She was especially influenced by homegrown bands like the X and the Dream Syndicate.

Both of those groups had a strong female presence. X’s lead singer Exene, and Dream Syndicate bassist Kendra Smith inspired Hope and her friend Sylvia Gomez to form their own duo, Going Home. Although their music was acoustic, and largely Folk based, they still found a home within the tight-knit Punk Rock community.

Going Home recorded some demos and somehow passed them on to Kendra Smith. She, in turn, gave them to Dave Roback, founder and front-man of Rain Parade. Along with the Bangles, Dream Syndicate and the Three O’Clock, Rain Parade were ground zero for L.A.’s Paisley Underground scene. Wedding classic ‘60s sounds like Garage, Baroque, Folk Rock and Psychedelia to the DIY Punk ethos, the Paisley Underground was equal parts fetishistic and authentic. The movement never really broke ground nationally, but it did attract some ardent followers. Prince named his recording compound and label Paisley Park, and later signed the Three O’Clock for their final album.

Although he produced several songs with Hope and Sylvia, Going Home recordings have never seen the light of day. Dave had quit Rain Parade, not long after they released their excellent first record. Coincidently, Kendra Smith did the same, leaving Dream Syndicate after their transcendent debut LP. The pair joined forces as Opal. Their debut, Happy Nightmare Baby arrived in 1987. Ever-quixotic, Kendra abruptly quit in the midst of an Opal tour. Dave drafted Hope to step in for Kendra and finish the tour. Not long after, they became Mazzy Star.

Mazzy Star’s inaugural effort, She Hangs Brightly, was released through the British label, Rough Trade in 1990. The record was a sharp distillation of ‘60s Psychedelia coupled with the decadent ennui of the Velvet Underground. Their videos went into heavy rotation on MTV’s “120 Minutes,” and Indie Rock connoisseurs immediately embraced the duo.  Although Rough Trade Records folded, Mazzy Star were picked up by a major label, Capitol, and their sophomore album, So Tonight That I Might  See, contained the break-out hit “Fade Into Me.” Not only did the song catapult the band into the Top 40 in early 1994, but it continues to resonate, scoring crucial scenes in TV shows like “CSI” and “Desperate Housewives.”

Two years later they returned with their third album, Among My Swan, and then nothing…Mazzy Star didn’t exactly break up, or even  announce a hiatus, they just stopped.  In 2001, Hope teamed with Colm O’Ciosoig, drummer from My Bloody Valentine and became Hope Sandoval And The Warm Inventions. Their debut, Bavarian Fruit Bread arrived in 2002.  Reviews were mixed and sales were unimpressive. It was another seven years before they returned with their sophomore effort, Through The Devil Softly.

In 2011, Mazzy Star released a two-sided single, a year later they played some select live shows, (including two Coachella dates). Finally, in 2013, their fourth LP, Seasons Of Your Day was released.  Critical acclaim was immediate and the album peaked at #5 on Billboard’s Independent Albums chart. A tour followed, but currently, Mazzy Star is once again in hibernation mode: A perfect time to reconvene the Warm Inventions project. 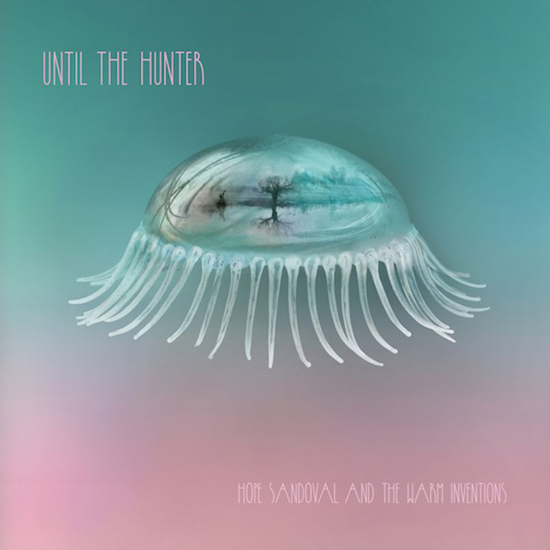 Reconnecting with Colm, inspiration came rather quickly. They opted to record in Ireland, (Hope splits her time between Berkeley and the Emerald Isle). The resulting album, Until The Hunter has just been released. A sustained organ note plays for more than a minute before Hope’s vocals appear on the opener, “Into The Woods.” Spooky and sepulchral, the song slowly unfolds, stretching nearly 10 minutes in length. Hope seems typically elusive, over a wash of keys, rainbow-tinged vibes and brushstroke drums, she will only admit “I miss you.”

Several tracks return Hope to her Folky roots. On “A Wonderful Seed,” finger-picked acoustic notes pluck out a simple, circular melody. Hope’s  demeanor shapeshifts from wily seductress to impossibly fey, (think Maleficent meets Rima The Bird Girl), as she spins a labyrinthine yarn that includes  Miss Sylvia, the Devil, the ocean and even tinkers, tailors and soldiers.

There’s an Elizabethan elegance to “The Hiking Song.” Strumming acoustic filigrees cluster and repeat, colliding with sawing cello notes that cloak the entire tune in melancholy. Hope’s vocals, suffused with heartbreak, echoes this single refrain… “You keep comin’ around.”

Buttressed by soothing keys, twinkling vibes and a tick-tock rhythm, the mood is close and intime on “Treasure.”  The listener nearly feels the acoustic guitar strings connect with the frets.  Languid and ethereal, the track is saved from musical narcolepsy, by gauzy guitar licks that snake through the arrangement. Non-sequitur lyrics like: “Secret sleep until the hunter loves you different, because tonight you will still be treasure,” gives the album its title.

The best tracks here are “The Peasant,” “Let Me Get There,”  “Isn’t It True” and “I Took A Ship.” Blending lap steel guitar, a loping rhythm and dusty acoustic guitar, “The Peasant” is an unlikely intersection between rustic Country-Western and tropical Hawaiina. “How did I get here?” Hope trills. The stream-of-conscious lyrics don’t offer any clues.

On “Let Me Get There,” thudding percussion kicks into a slide-y synth/guitar fusion that recalls the intro to Paul McCartney’s “Band On The Run.” A laconic duet between Hope and Indie Rock stalwart Kurt Vile, the pair play off each other like a 21st century Nancy Sinatra and Lee Hazlewood. The sunshiny guitar solo on the instrumental break sparks and pinwheels echoing another ‘70s antecedent, “Midnight At The Oasis.”

Powered by sleigh bells, strummy acoustic guitars and a hiccough-y back beat, “Isn’t It True” is a buoyant minor key waltz that is impossible to resist. Ebbing and flowing under “shh-shh-shh” vocalese, modal electric riffs pulsate through the mix.

Meanwhile, handclap percussion and Punky Flamenco guitar anchor the more aggressive “I Took A Ship.” The lyrics play out like a tipsy travelogue as woozy synths and shards of electric guitar magnify the moments of malaise.

Other interesting tracks include the stately “Day Disguise” and the slow-cooked Soul of “Salt Of The Sea.” The album closes with a bang on “Liquid Lady.” This song pulls out all the stops, as swirly Psychedelia meets Spaghetti Western grit.  Hope’s ghostly vocals ride roughshod over reverb-drenched riffs, it all coalesces around a wash of keys, walking bass lines and a stop-start rhythm. Clocking in at over six minutes, it’s a stunning finish to an amazingly great record.

Until The Hunter was recorded in Ireland’s infamous Martello Towers. Historical, 19th century forts, they were used for shelter during the French Revolutionary Wars. The cylindrical shape of each, were surprisingly beneficial to the recording process. While Hope handled vocals, keys and vibes, Colm played guitar and drums. The sessions also included additional keys from Mick Whelan, more guitar from Charles Cullen, Dave Brennan and Jim Putnam. Al Browne played bass, Ji Young Moon was on cello and Mariee Sioux supplied backing vocals.

While they were in the Bay Area, Hope and Colm discovered a musician named Michael Masley playing at the BART station in Berkeley. Transported by his idiosyncratic music, they invited him to record. Michael joined them in Ireland, and played a prominent role on the album, adding gong and nickleharp.

At one point on the record, Hope Sandoval asserts, “I’m gonna do what I wanna do in my days.” Until The Hunter is by turns bewitching, enigmatic, ethereal, wistful and whimsical. So yeah, no rush, she has earned the right to take her time and do whatever she wants.