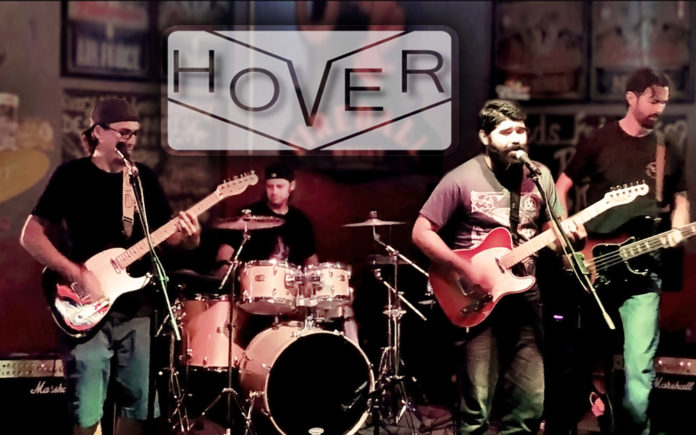 Perseverance is an understatement when describing the collective efforts of Frank Michel, James Hollis Eaton and Shawn ‘Stretch’ Fisher. They’ve been through a lot together in the last five years. The loss of their friend and always resilient frontman Alex Antonio earlier this year was the ultimate heartache. They took the time necessary to regroup and consider their continued journey after an overwhelming blow to their music family. Michel shares, “It was and is devastating and a shock to all of us. We had an amazing experience writing music with Alex in Hollace. Everything always clicked and the songwriting was pretty easy. Not much had to be said, we just played and felt in the moment.” Fisher adds, “He was a unique talent that brought life to our music and live performance. He was also a unique individual who was great to hang out with.” Eaton responds, “Going through his battle, he was always about the music and wanting to get back to writing and practicing as soon as he physically could. We were writing new songs with him during the 18 months he was battling cancer and even did a couple of shows. He was determined not to let it stop him. That was very inspirational for us. We were right there with him all the way to keep it going and keep his will to fight alive. We will always miss him and will cherish the time we did have to create with him.”

When asked how they will honor the legacy of Alex and what he stood for musically, they simply stated that it is too difficult to put into words. Them moving forward is a testament to the bond they had with Alex and their actions speak so much louder than any string of words they can muster. Enter Hover.

“Hover is about creating unique music. Our sound is melodic rock that is reminiscent of 90’s alternative rock with hints of blues and 80’s indie rock,” Michel states. The members of Hover are Michel on vocals and guitar, Eaton on background vocals and guitar, ‘Stretch’ on bass and Jason Piazza on drums and percussion. The name Hover comes from one of the first songs they wrote when they formed.

Hover is laying the first stones and has released some original material on-line. “We just uploaded three featured songs on Reverbnation about a month ago. We are still very new and are getting a full set rehearsed,” Michel explained.  “We did a ‘mini’ show at Big Rock Pub Open Mic after Lance Riebsomer invited us out. We appreciated that and we got a good response. It felt good to be on a stage again. At the same time, we’re running a studio now and we needed to figure out the balance of having our own time to rehearse, which is not as easy as we thought it would be.” The Sound Hub is a rehearsal space and recording studio Michel, ‘Stretch’ and Hollis share ownership in.

The Sound Hub venture has a direct correlation with Hover. Without Hover, they may not have found The Sound Hub. It seems to have all fallen into place for Hover. Michel points out, “We needed the practice spot for Hover and now we provide that practice spot to others in need of a place. We found the location, at the time, called All Desert Music. We actually paid for rehearsal space until one day they decided they’re closing down the studio. We didn’t want to lose our new spot so we ended up buying most of their equipment and assuming the lease. We never planned to become business owners; we just wanted to continue writing music and get Hover off the ground.”

Hover is now lifting off and the band is getting connected with other local artists through The Sound Hub. Eaton discusses, “Not only is this our practice spot now, but as bands come in, a lot of times they recognize us from Hollace and want to know about new projects, and we in turn, learn more about our valley’s musicians and what’s going on. So people are learning about Hover through The Sound Hub.”

There’s no doubt that Alex Antonio would want his friends in Hollace to continue making music. The spirit of Alex carries on in every endeavor any desert music musician embarks on.

You can find the songs ‘Save Me,’ ‘Taking My Time,’ and ‘This,’ on their Reverbnation page. The songs are melodic with meaning. Their sound is direct and does not hesitate. The instrumental differentiation is superb with the bass sound rightfully achieving the spotlight. Michel’s vocals are not pressured, but pleasant and within his range. I look forward to their live show and future recordings. Check them out below: