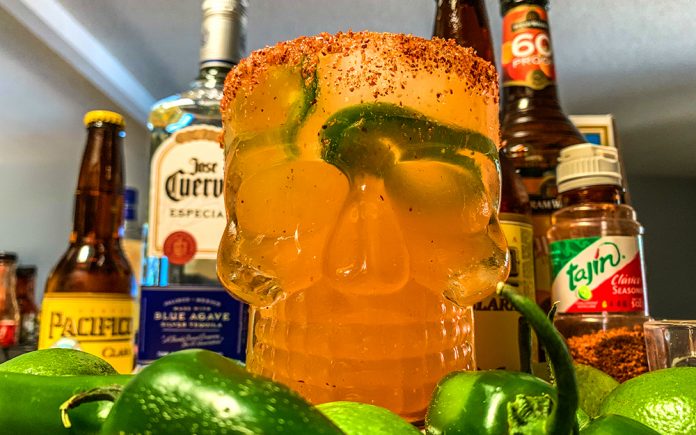 Up until about three days ago, my current beer of choice has been the IPA; Classic West Coast style, New England style, Brut IPAs. I have a deep-seated love for hazy DIPAs, triple dry hopped with Simcoe and Mosaic until they taste like tropical fruit juice; SMaSH IPAs, single hopped with chinook and tasting like pine cones. I love them all, at least until three days ago when the weather in the Coachella Valley hit 105 degrees, and those intense, full flavors begin to lose a little bit of their luster. Sure, sure, there are session IPAs, small and dry and substantially more bitter tasting than their big and malty, high ABV counterparts. If I’m going to be completely honest with myself, maybe I’m just burned out on all those hops. Maybe I just need a beverage change to go with the change of weather. It’s finally swimming pool weather, margarita and light beer weather. Some might say that the ultimate warm weather drink is the beer margarita. 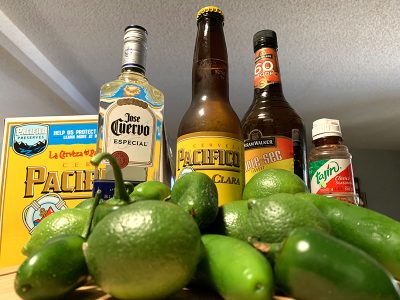 There are several claims that contradict each other as to who actually created the cocktail. A more persistent and popular claim is that Danny Herrera invented the margarita in the late 1930s as a way to give a drink to a showgirl he wanted to impress. Marjorie King claimed allergies to most spirits, but could take tequila. According to this version, the original margarita cocktail was simply a popular brandy drink from the time called a daisy, that Danny Herrera substituted tequila over brandy in. He experimented with his new beverage, made some changes, and turned it into the tequila, Cointreau, and lime juice drink that we know today. Either that or it was invented by a guy from Chihuahua, Mexico named Pancho Morales (margarita experts in Mexico claim that this mysterious gentleman is the rightful inventor). Dallas, Texas socialite Margarita Sames claims she invented the drink at her Acapulco vacation home in 1948, while bartender Santos Cruz claims to have created the drink in 1948 for singer Peggy Lee. As with most things, they were probably all doing very close variants of the same drink, and they most likely all can lay claim to coming up with the idea independent of each other. It’s no wonder that no one really wants to try and figure out who the first to dump a Corona Light into their margarita was.

The beer margarita is nothing new, we’ve all seen pictures of the classic beerita, an upside-down Corona bottle sitting in a schooner glass full of frozen margarita mix. I’m sure it’s been a staple of Mexican restaurants and cantinas for decades, growing in popularity in the age of social media. Unfortunately, every recipe I’ve seen is the same thing; a pedestrian mix of frozen limeade, 7-Up, vodka and/or tequila, water, and beer. That kind of drink might be good enough for the Applebee’s crowd, but Brewtality readers deserve better, and better is what you get. I made my own beer margarita, named it the Handsome Devil, and I’m giving away the recipe.

12 oz. bottle or can of Mexican lager.

1 jalapeno, sliced at an angle into long rings 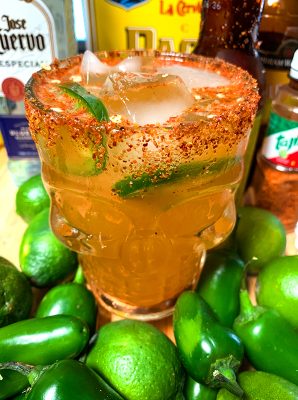 Combine tequila, triple sec and all that lime juice in a shaker pint. Pour in a teaspoon of Tajin seasoning, add the sliced jalapeno and one of those already-squeezed, discarded lime halves to the shaker. We’re going to muddle and mash to release the oils and acids from the lime and chili into the liquor. If you don’t have a muddling stick, you can use the handle-end of a wooden spoon to lightly crush and infuse your mixture. Once your spirits and fruits are muddled, put the mixing pint aside and get out your favorite 16 oz. serving glass. Run another one of those discarded lime-halves along the edge of the glass, then roll the edge in a dish of Tajin to coat and garnish the rim.

Add ice to your glass if necessary, and 2 rings of sliced jalapeno for flavor. Strain your tequila mix over the ice, and top up the glass to the rim with your favorite Mexican lager. It’s tart, spicy, lightly salty, crisp and refreshing, and is the best damn version of a beer margarita I’ve ever had. That, ladies and gentlemen, is El Guapo Diablo, and it’s what I’m going to be drinking the rest of quarantine!