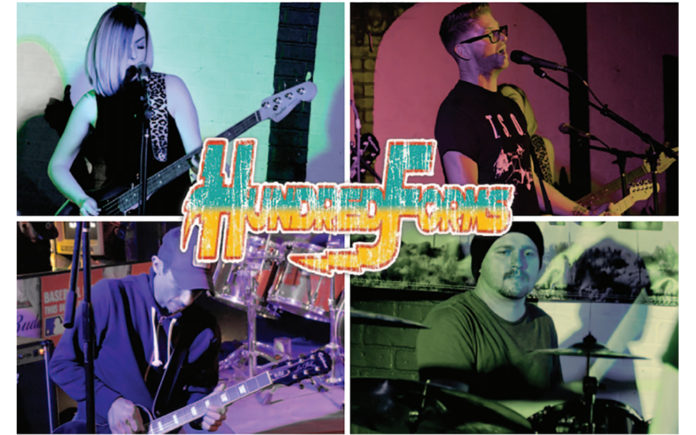 Three years in the making, the members of the alternative rock quartet, Hundred Forms, are beaming with pride over the completion of their first EP. Friday, March 16th the band is inviting all the cool kids to celebrate their CD release along with Coachella Valley favorites, Blasting Echo and Right On Right On. The story of the creation of this band is one of evolution and its roots stem from a previous project. I sat down with the guys in Hundred Forms in their Thousand Palms rehearsal space to discuss their musical journey thus far.

Brent Basore, lead vocals/guitar: “I guess it all started when a friend of mine asked me to play guitar for her and I had written a few songs she wanted to hear. She liked them and wanted me to play them live and I told her that I didn’t play those songs in front of people. She basically ended up convincing me to do it. Carleigh (Brent’s wife) was there in the audience and I guess it didn’t suck.”

Brent: (Laughing) “Yeah, I guess that is important. So originally I asked Larry, to come play the cajón and he was down. At that point, my friend was playing guitar, Larry was on the cajón and I was on bass.”

Larry Ellis, bass/backup vocals: “Yeah, then after rehearsal one day I picked up a bass and just started messing around with it.”

Brent: “Yeah, he was basically shredding and I was like, ‘Larry, you play bass?’ And he was like, ‘Well, I play guitar…’ So, I was like, ‘Well from now on you play bass.’ But then Carleigh said she was thinking she wanted to start a band and play bass and Larry said he would play guitar. So, the three of us started playing together and writing songs. Then we started searching for drummers. We probably went through 10 drummers before we found Corwin which we were extremely fortunate to do so.”

Corwin Hendricks, drums: “We had a friend in common who knew they needed a drummer and asked me if I was interested. I said sure…we got together and to put it simply, I really, truly dug their music so I was in.”

I asked the members about their individual backgrounds and influences when it comes to music.

I started with Hendricks, also a member of melodic punk group, Upper Class Poverty, and known throughout the local music scene as one of the most highly skilled drummers around.

Hendricks: “I was a band nerd and drumline was how I started out as a musician. I still teach drums to nerdy-ass kids during the summer and it’s fun. That’s my true roots. I never played in a band before Upper Class Poverty.”

Carleigh: “My grandparents saw to it that I was surrounded by music. Mostly the classics like Sinatra were played around the house pretty much 24/7. I had a couple of piano lessons and played the trombone in elementary school but I never really played music until I picked up the bass about 4 years ago to play with these guys.”

Ellis: “I started playing saxophone in 7th grade and learned treble clef and decided I was into music. Eventually, a friend of mine was selling an electric guitar with a little combination Washburn amp I bought for a hundred bucks. I bought tablature and learned all of the Metallica songs in the book. Then I started learning Sabbath stuff by ear, but never really took music seriously until I joined a band. After that fell apart I came out here from Austin, Texas, met these guys and here we are.”

Brent: “I was born in Long Beach and grew up in Riverside. I came out here around 12 years ago. There was always an acoustic guitar around the house when I was growing up and when I was big enough to start playing it, I did. When I was around 10 we hired a guy to come give me lessons for five bucks a lesson. I got my first lesson and he said if we pre-paid he would give us a deal so we gave him 15 bucks and he never came back.”

(The room erupts in laughter.)

I asked the band about the journey that was recording their new EP and they told me that from the time they decided to make it happen up until this point it has taken about a year and it has been pretty much completely DIY. They set up in their rehearsal space and with some logistical help from Hendricks’ brother, Mikey, (bassist for Upper Class Poverty), and have managed through ups, downs and frustrations to put together their recordings in a collection they are truly proud of.

Hendricks: “Like I said before, the reason I joined this project is due to the fact that I truly think the music is great. I know if I like it then other people will as well. We are really excited to share it with everyone.”

Celebrate with Hundred Forms along with Blasting Echo and Right On Right On this Friday, March 16th at The Hood Bar and Pizza at 9:00 PM. Check them out online at https://www.facebook.com/Hundredforms/