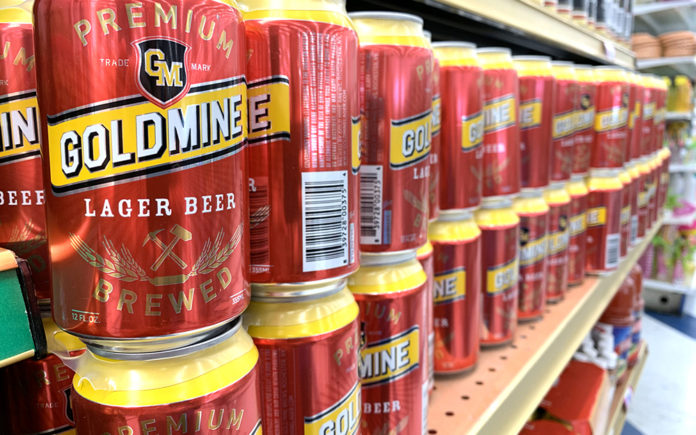 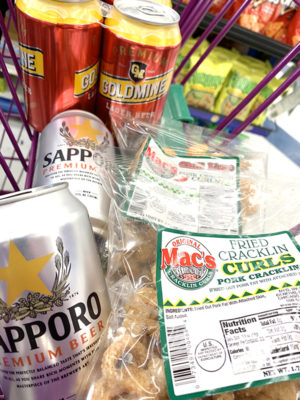 So, there I was, trying to give wine advice to a little old lady in the frozen meal section of the .99 Cent Store. She’d asked me what kind of wine she should get, then made it abundantly clear that she held nothing but judgement and distain for the bottle of Rose that I had picked out for her. Same with the Chateau le Paws Chardonnay (All the bottles of cute pictures of dogs on them!). When I started to pontificate on the virtues of Pinot Gris, she hastily picked up a bottle of dusty looking Cabernet and interrupted me with a “thanks” before shuffling off as fast as her tennis-ball footed walker would allow. Having done my good deed of the day, I was now free to check the Spam expiration dates, which is what I do on Sundays. I go to the dollar store and look at Spam. Sometimes I buy, sometimes I window shop, and it all depends on the expiration date.

Next to the scratch and dent sale that is their wine wall, was the variety of factory irregulars that is their beer wall. Now, half their stock I’ve had before (not a source of pride, just saying), but new to the stable were single cans of Sapporo for .79 cents, and 6-packs of Goldmine Lager Beer (it’s premium, says so right on the can) for $2.99. I could barely contain my excitement at having new cheap beer to complain about. I loaded up my cart with Mexican candy, pork rinds and Alka-Seltzer because the day was about to get wasted.

I once again rated these beers in dumpster fires and got to drinking.

The number one selling Asian beer in America since 1984, it’s sales success might be owed in part to how absolutely ubiquitous this brand is. While it failed to turn up in gas stations and convenience stores in my area, it was available at every grocery store I checked, the .99 Cent Store included. Sapporo Premium Lager is not a true Japanese import; the company owns a brewing facility in Ls Crosse, WI, which handles North American production along with another brewery that Sapporo owns in Canada.

Outside of North America, the beer is known as Sapporo Draft.

There is nothing offensive about this beer in the slightest. Clean, crisp and dry, with minimal hopping that balances out the dryness to create a very neutral tasting beer. A slight starchiness comes through at the finish as it warms, reminiscent of rice. While not spectacular, this beer does not suck in any way, shape, or form. A quintessential American style pilsner, without any of the graininess or cloying characteristics found in lesser American lagers. Sapporo Premium from the .99 cent store gets ½ a dumpster fire, and that’s a damn good score. 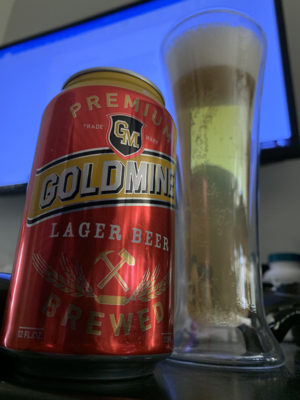 While the can says “brewed by Gold Mine Brews”, a little bit of digging on the old interwebs found that Gold Mine is just a name owned by the Genesee Brewery, a regional beer from Rochester, NY, that has found some national success as a contract brewer for many small brands who need mass production of their brews to meet corporate demand. Big Flats 1901 is brewed by Genesee for the Walgreens brand, with the company brewing similar style lagers for Walmart as well. I can’t attest to the quality of any of their other beers, but Goldmine is legendarily bad. This tastes like a beer flavored extract mixed in seltzer water. This tastes like beer created by someone who’s had beer described to them but has never actually drank one. This tastes like the stuff that I used to make in my closet with a Mr. Beer kit, no lie. This beer tastes slightly wrong from the way a real beer should taste. This tastes as much like beer as powdered milk tastes like milk.

I think you get the point.

Unless you ironically want to know what powdered beer might taste like, I’d stay away from this smoldering mess. Goldmine gets 5 fully engulfed, burning dumpsters, making it the new, reigning champion of awful .99 cent store beer.