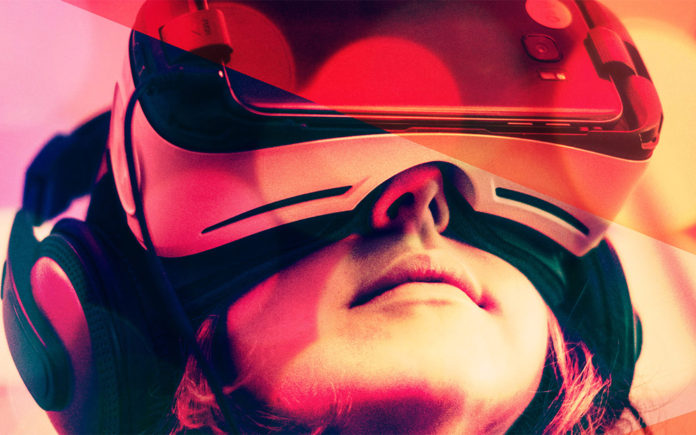 In the hall, just outside a nondescript room in a hotel’s convention area is a line of people, which if you had to guess what they were all waiting for could never be answered just by their cumulative looks. Young, old, hipsters, nerds, some tattooed and others in golf shirts, they share at least one thing as they patiently wait along the rope — curiosity about virtual reality.

Glance within the partitioned room and it appears the people are in some sort of bizarre trance. Equipped with headset goggles and earphones, men and women quietly stare off into space, reach for things no one else can see and twist around in their seats –lost to another world.

This is the Palm Springs International ShortFest VR Lounge where the latest in film technology immerses the viewer in the setting and action in what can only be described as an alternate reality.

The clarity of the images and sounds is so vivid the user is absorbed into the environment. No matter where the viewer looks – up, down, or around — there is a phenomenal, cohesive world!

“Virtual Reality has taken storytelling by storm,” said Lili Rodriguez, Director, Palm Springs International ShortFest. “This festival really champions short form and we want our general audience to be able to experience all the great things happening out there.”

The VR Lounge is a community event free to the public! For two days during the ShortFest, Thursday and Friday, June 22 and 23 from 11:00am to 7:00pm at the Riviera Resort & Spa, there is an opportunity to partake in the cutting-edge technology revolutionizing filmmaking, animation and gaming.

The University of California, Riverside teamed up with the ShortFest to bring this incredible and unique experience to the CV.

“The VR Lounge is the result of an ongoing partnership UCR has with the PSIFF and ShortFest to provide free, year-round, community-based arts programming centered around their amazing festivals,” said Tod Goldberg, Administrative Director, Low Residency MFA in Creative Writing & Writing for the Performing Arts, University of California, Riverside.

At last year’s ShortFest, UCR sponsored Tech Day, which included a small VR experience, several panels and discussions, which focused on technology and social justice. The event was exclusive for festival ticket holders.

“This year, we wanted to expand that footprint by letting the community see what the future was about to look like,” said Goldberg. “So in collaboration with the great programming staff at ShortFest, we have sponsored the Virtual Reality Lounge, and made it free and open to the public.”

Rodriguez and her team had the task of selecting the VR line-up.

“There is certainly a lot of content so it was a task narrowing it down, but we opted to give people a variety of experiences,” said Rodriguez.

Women on the Move  – Documentary – Set in rural Niger, a grandmother’s life changes when she joins a women’s savings group to help her granddaughter take the next step out of poverty.

Pearl – Animation – A girl and her dad crisscross the country in a hatchback chasing their dreams.

Sonar – Narrative – When a drone discovers an unknown asteroid, it receives a strange signal. To locate its source, the drone ventures deep into an ancient labyrinth — a place that holds a secret even darker than space itself.

Land’s End – Game  – Set against spectacular landscapes, the player (the VR viewer) is tasked with awakening an ancient civilization using only the powers of his or her mind.

“The ShortFest staff selected the films and I can tell you each is pretty amazing,” said Goldberg. “The documentary Women on the Move, produced in association with CARE, a leading humanitarian organization fighting global poverty, is particularly stirring. It puts you in the shoes of women in rural Niger in a way that will leave you breathless.”

“Virtual Reality has the unique ability of personalizing topics that we might normally shy away from looking at — when you are in the movie, it is impossible to not care about the issues facing the world,” said Goldberg.

Virtual reality films have only recently become a component in most of the world’s major film festivals.

“Even Cannes has VR now,” said Rodrigez. “ShortFest is very much a filmmaker’s festival for us. All of what we do is so that attending filmmakers will learn and take something from it.”

“We see VR as a very real option for our filmmakers. There is a lot of demand for storytellers in the field, and we want to make sure that our filmmakers know it’s an option!” said Rodriguez. “It’s also just amazing to see how the technology has advanced. And, of course, we want people to have fun!”

The VR Lounge offers a unique opportunity for CV residents to see what’s next in filmmaking. Virtual reality is here, and it is spectacular!

The Riviera Resort & Spa offers valet parking for a fee or free parking at the Vista Chino entrance.  Follow the ShortFest signs.