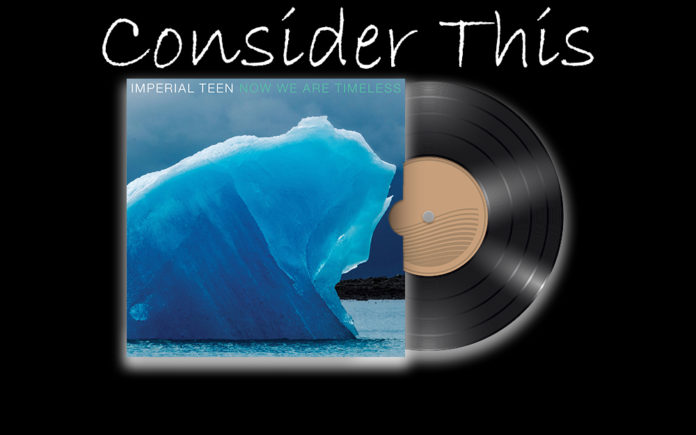 Roddy Bottom is a complicated cat. He first came to prominence nearly 30 years ago as playing keyboards and rhythm guitar for Faith No More. But he’s also fronted his own band, Imperial Teen, written film scores, acted and even composed an opera, entitled “Sasquatch: The Opera.”

He was born Roswell Christopher Bottum III in 1963 and joined Faith No More in the early ‘80s. The San Francisco band seamlessly blended Hip-Hop, Metal, Punk, Funk and Prog. They first gained notoriety in 1987 with the thunderous single “We Care A lot,” which broke through on KROQ, (L.A.’s premier New Wave radio station), and then MTV. That set the stage for their biggest success, the bombastic crunch of “Epic,” featuring new vocalist, Mike Patton.

In the ‘90s, as Faith No More’s fortunes ebbed and flowed, Roddy began a side project, Imperial Teen, with drummer Lynn Perko Truell, bassist Jone Stebbins and Will Schwartz on guitar and vocals. Actually, all four traded vocal duties, and their sweet/sour boy-girl blend became a signature sound.

Imperial Teen signed with Slash Records (not-so coincidently) Faith No More’s label. Their debut, Seasick was recorded in just one week after the band had been together only six months. Produced by Steve McDonald of Redd Kross, it arrived in the Spring of 1996. The music was a prickly combo-platter of Power Pop and Punk, with tart lyrics that highlighted the band’s queer-centric perspective.

Three years earlier, in 1993, Roddy had come out during an Advocate interview with musician/journalist and Gay icon Lance Loud. In fact, Faith No More had already recorded “Be Aggressive,” his vivid ode to oral sex, for their popular 1992 album, Angel Dust. Fronting his own band gave him, along as well as his bandmates (Will was also Gay, Lynn and Jone identified straight), the freedom to express themselves completely.

Imperial Teen’s sophomore effort, What Is Not To Love was released in 1998, just as Faith No More was imploding. What… amped up their sound, adding more energy without sacrificing their trademark idiosyncrasy. They even managed to score a minor hit with the song “Yoo Hoo,” which was featured prominently in the movie “Jawbreaker,” a black teen comedy that starred Rose McGowan.

Over the next 20 years the band sporadically released albums and toured in between other projects and the occasional Faith No More reunions.  Their third long-player, On arrived in 2002. Five years elapsed before The Hair, The TV, The Baby & The Band was released. The album title was a sly nod to the extracurricular activities that kept the band apart. Finally, the rather tactile Feel The Sound appeared in 2012. It’s been a long seven years, but finally Imperial Teen has returned with Now We Are Timeless.

The album opens with the bloopy Dance Pop of “I Think That’s Everything.” Icy keys, bubbling synths and static-y percussion Flicker and sparkle as lyrics track a quarrelling couple mid break-up; “A flash of light a burst of flame, the shooting of the star, another player in the game to heal without a scar/Mistake the best of me for what I used to be, there’s no more us or you or me, cause we were everything, I think that’s everything” This is probably the way Gwyneth Paltrow and that Coldplay guy consciously uncoupled. The whooshing synth solo on the break is suitably goopy.

Conversely, “Parade” flips the script, ditching post break-up civility for some good old-fashioned shit talk. Here, a pummeling beat locks into a martial cadence, as charged guitar riffs collide with bashing bass and tensile keys. The instrumentation serves to frame lyrics that, at best, feel like a collection of left-handed compliments; “Despite the dates and plans we made, the rules you broke and the things you said/You’ve gone and left the bed unmade, I miss the way you’d rain on my parade.” On the break, shards of a one-sided conversation filters through the mix, ratcheting up the contempt.

Make no mistake, Imperial Teen write upbeat, fun songs, but often, the pretty package conceals serious concerns. Take “How We Say Goodbye,” the lyrics manage to limn the existential ache of loneliness; “I heard a song, I closed my ears, I couldn’t stand the sound of lonely/It just got loud with me too proud to plug My ears again if only.” But the angst is upended by a winsome melody anchored by pounding keys, chop-sticky percussion, sinewy guitar and a stop-start rhythm.

The album’s three best tracks stack one after the next on the second side. “Somebody Like Me” is surprisingly languid, accented by muted keys, subdued guitar, feathery vocals and a dropped beat. Cryptic lyrics seem to take a parent to task, hinting at a failed Gay conversion plan; “You wanted to change him, had a plan to rearrange him/No god could have saved him, better leave him at the station, all aboard, cut the cord.” Rev’ ed up keys on the break snarl with disdain.

With “Ha,” even the title is economical. Here, stabby keys, connect with angular bass lines, skittery guitars and a slinky rhythm. The melody and arrangement share some musical DNA with the Kinks’ seminal “All Of The Day And All Of The Night,” as well as the Doors’ slithery classic, “Hello, I Love You.” Veiled lyrics like “Oh haven’t we met, what’s your name-or not yet, are you ready let’s go/Play it safe, make a bet, are you blonde or brunette, a friend or a foe, well, hello” hint at some sort of Tinder/Grindr (eharmony?) assignation.

On “The Girls,” a Punky “1-2-3-4” count-off indicates a return to Imperial Teen’s primitive beginnings Whipsaw guitars, vroom-y synths, snug bass runs and a rickety beat nearly camouflage lyrics that offer an opaque valentine to a girl who’s “A one of a kind, sometimes too loud, sometimes too soft.” The tempo shifts on the bridge, splitting the difference between snarly Punk Rock and four-on-the-floor Disco groove, rendering the song irresistible.

Other interesting tracks include the frenetic “Walkaway,” which feels like a sideways homage to the time honored Gay activity known as cruising. Then there’s the robotic chill and metallic clink of “We Do What We Do Best,” as well as the electrostatic Funk of “Don’t Want To Let You Go.” The album closes with the title track which blends fluttery keys, a powered-down beat, boomerang bass runs, phased guitars and quavering vocals. Airy and ethereal, the song brings the album to a shimmering crescendo.

Back in the ‘90s, Imperial Teen took the Punk/Pop dynamics pioneered by the B-52’s and wed them an alt-rock foundation, Paving the way for bands like The New Pornographers and Scissor Sisters. Now We Are Timeless continues that tradition, hitting That sticky/spiky sweet spot. Rather remarkably, their music remains ageless.