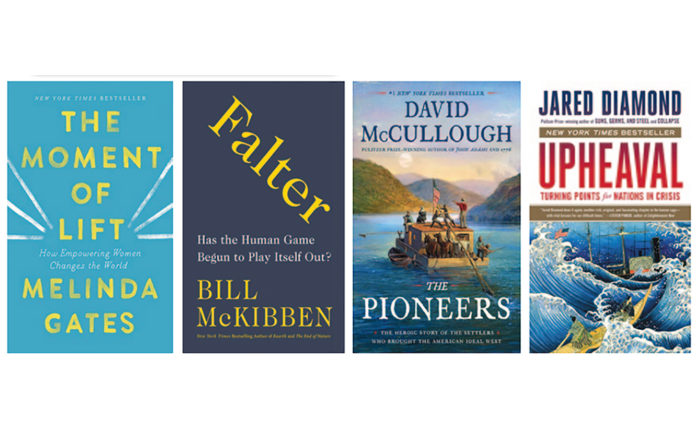 I grew up in a family that was very patriotic.  The American flag flew not only on national holidays, but year-round.  When it was worn out, it was disposed of as directed by law, i.e., folded and burned not directly thrown into the trash.

As Americans, we value our freedom!  To love our country may be noble, but freedom isn’t free, without questioning its power and actions, and speaking up against injustice and oppression.

A form of patriotism is to be informed, and understand what is happening in this nation and engage in a dialogue about what can be done to really make this country “great again.”

Here is a cross-section of nonfiction books with relevant themes, valuable insights and meaningful information to better understand our nation and ways to improve her:

The Moment of Lift: How Empowering Women Changes the World by Melinda Gates

I list this book first because of the strength in Gates’ message about equality for women.  Lifting people out of poverty (mostly women) by allowing them agency to provide for their families creates not only human dignity, but a better society and economy for all.  The rise of patriarchy and its continued domination keeps women from equal pay and power in America and the world.

Falter: Has the Human Game Begun to Play Itself Out? by Bill McKibben

Author McKibben voices a warning that we have but two options to save the human race from extinction.   The carbon dioxide, which continues to spew into the atmosphere in unprecedented quantities, may be irreversible unless we turn to solar power and pursue those who refuse to give up profits with non-violent protest.  McKibblen spells out the facts, points fingers at the major violators and looks to the future for solutions.

Upheaval: Turning Points for Nations in Crisis by Jared Diamond

As a country, the United States is still young and evolving.  Diamond looks at six countries and how they survived major upheavals.  The author recounts the historical turning points and the psychological impact in which nations and individuals cope and recover from grave crisis.  Understanding how people create and then survive disaster is relevant today as we see how quickly things can change if we do not act or voice our concerns.

The Pioneers: The Heroic Story of the Settlers Who Brought the America Ideal West by David McCullough

In this engaging historical narrative about the men who searched out new territory, we see how so much of our American values came to fruition (and the start of America’s white, male domination?). Discovery and dignity, property and profit, may be embedded in the DNA of our human nature.

Reading is such a joy!  These books are well-written and well-researched.   Within the pages, there is a world view of societies and cultures where we can see ourselves as human beings and as Americans to perhaps get a glimpse into our future.  A bigger view of the past can inform our current condition where hopefully we can improve on it before it is too late.

As patriotic people we celebrate our freedom and continue to speak up against inequity and injustice to form a more perfect union.