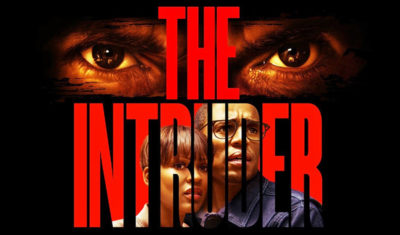 When a young married couple (Michael Ealy and Meagan Good) buys their dream home in the Napa Valley, they are convinced they’ve found the perfect place to take their next steps as a family.  Only problem is, the seller’s (Dennis Quaid) strange attachment to the place and the buyers.  As he infiltrates their lives, they rightly suspect that he has hidden motivations beyond the quick sale.

Quaid is terrific as an unhinged psycho and is the primary pleasure in watching this formulaic and derivative yet entertaining horror film.

This is the kind of movie that makes viewers shout at the screen and warn of impending danger.

Filmmaker Deon Taylor delivers an OK thriller that offers few real surprises, but finally manages to evoke an atmosphere of dread that works, mainly thanks to Quaid’s wonderfully lunatic performance. 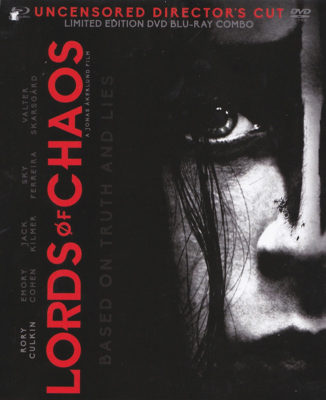 Set in 1987 Oslo, this is the story of true Norwegian BlackMetal and its most notorious practitioners: a group of young men with a flair for publicity, church burning and murder.

Seventeen-year-old Euronymous is determined to escape his near perfect and idyllic Scandinavian hometown and launch true Norwegian Black Metal.

Euronymous is joined by equally fanatical youths  — Dead and Varg.  They believe they are on the cusp of a legitimate musical revolution, driven by the black metal dogma to spread evil.

They begin by burning churches throughout the countryside and stealing tombstones for their record store.  But when the press catches up with them and Euronymous takes more credit than he’s actually earned for the group’s violent acts, Varg, fresh out of jail, arranges a dark encounter to settle the score and ultimately determine just who the darkest black metal musician really is.

aggressively nihilistic aesthetic spilled over into fatal acts of violence.

No question Jonas Ackerlund’s film is well-crafted and even plausible.  But some of the gut churning violence was hard to watch.  He has a gift (if that’s the word?) for staging and choreographing the violence with unblinking realism.

This visceral parable of youth culture pushed to the extreme raises a semblance of sympathy for a person who clearly didn’t know how to deal with his feelings when it came to the suicide of his best friend.

Lords of Chaos” is a fascinating, quasi-factual account that not only bends but breaks boundaries as it tests audience’s endurance and turns their stomachs.  It will leave you shaken with its shock tactics,-brain matter, blood spatter, and soul-grating howls of pain that are, in the end, are neither shocking nor insightful.

Jonas Åkerlund’s torturous dedication to bleak-as-hell metal crimes is an unsettling enterprise bedecked in leather, soaked in damnation and alive with a radioactive intensity that drives home the difference between entertainment, the real world and art. Vice Films, Gunpowder and Sky, 20th Cent Fox. 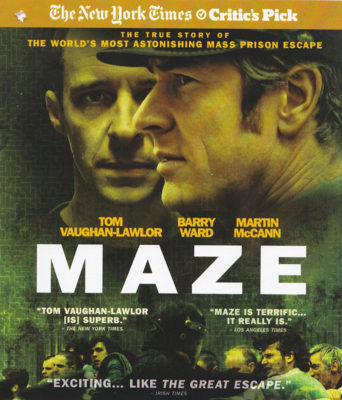 Maze is based on the incredible true story of the 1983 mass breakout of 38 IRA prisoners from the high security HMP Maze prison.  The movie charts how inmate Larry Marley (Tom Vaughan-Lawlor) designed and managed the largest European prison escape since World War II.

Up against the most state-of-the-art and secure prison in all of Europe – Larry must coordinate with inmates across several cell blocks.  While scheming his way toward pulling off this feat, Larry tries to establish a friendship with prison warder Gordon Close, (Barry Ward).  Both men are irrevocably changed by Larry’s ultimate betrayal of trust when the breakout finally takes place.

I was riveted by this surprisingly authentic-seeming film with hardly a single false note.

There’s a masterful mix of the expected suspense of plotting the escape itself that’s always dependent on split-second timing along with the psychological games the prisoners play with the guards — and each other. 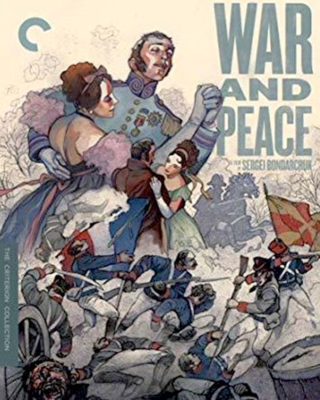 Russian director Sergei Bondarchuk’s epic 1966 version of Leo Tolstoy’s “War and Peace” (Voyna i Mir) was, at the time, the most expensive European film. Bondarchuk spent seven years filming the project, and, in some sequences you can literally see the actors noticeably age from scene to scene, assuming you stick around for the full 507 minute cut!

Tolstoy’s complex tale of Napoleon’s invasion of Russia, as realized by Bondarchuk includs some the most graphic battle scenes ever put on film, one of which runs nearly 45 minutes.

Many horses were killed in these sequences and the film was rightly and loudly boycotted in some American cities by the ASPCA.  No film is worth the killing of sentient creatures.  And for this reason alone I cannot recommend it.

Bondarchuk adhered closely to the source material but did make a concession to Hollywood, his leading lady Lyudmila Savelyeva looks an awful lot like Audrey Hepburn, the star of King Vidor’s 1956 film of the Tolstoy’s novel.

It’s a big film, but not a great one.  Amid the often staggering visual splendor there’s a plethora of dull sequences and then finally the overly sentimental operatic finale.  Criterion.