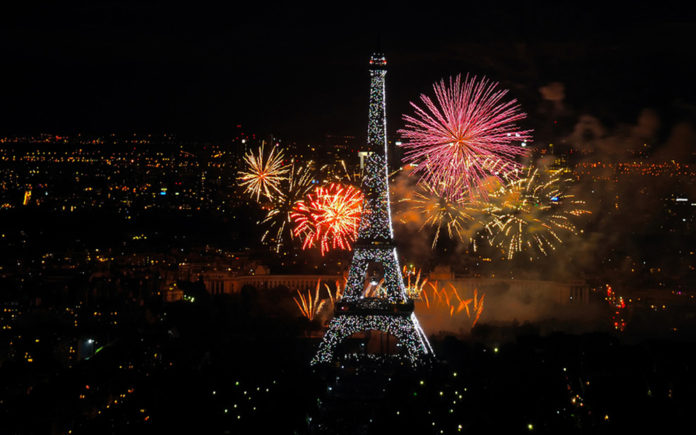 Non-myopic Americans may have noticed that our brothers and sisters to the North (aka Canada), celebrate Independence Day a few days before us on July 1st.  While some inside the Washington DC beltway might think that this was another case of Prime Minister Trudeau exerting a bit of one-upmanship on our President; that was not in fact the case.  Canada has an Independence Day of their own that they call Canada Day.  With a population that is less than California, Canadian celebrations are similar to ours but on a smaller scale.

Ten days after our celebration, France has one of their own – La Fête Nationale.  Also known as Bastille Day, this French celebrate with champagne toasts and spectacular fireworks shows in Paris and Marseille.  A lesser known part of their national day of pride are dance parties held around the country in fire stations.

India gained its independence from the United Kingdom on August 15, 1947 and celebrate in many ways that are similar to us such as parades, shows of patriotism and food.  Kites fly across the skies while people eat foods of the color of their flag – green, white and orange.  One common food dish is tirango pulao which is a tri-colored rice pilaf made from basmati rice, carrots and coriander and finished with crushed cashews and dried fruit.

Another former British colony, South Africa, does not recognize their independence from Great Britain on May 31st.  Instead, the country remembers the end of apartheid on April 27, 1994.  In addition to the normal patriotic activities of most countries, Afrikaans as they call themselves eat braai (known to us as barbeque).  Braii is short for braaivleis which translated means ‘roasted meat.’  Afrikaans feel their barbeque is better than ours as they only use wood or charcoal for cooking their boerewors (spicy sausages) and seasoned lamb.  For dessert, many enjoy milk tart or malva pudding.

The United Kingdom does not celebrate an independence day but does celebrate the Queen’s birthday.  Rather than celebrate on her actual day of birth, the government chooses a day in the first half of June each year.

Our neighbors to our south in Mexico do not celebrate their independence on May 5th as many Americans believe as Cinco de Mayo is the celebration of an underdog battle victory over France.  The actual date of Mexico’s independence from Spain is September 16th.  Foods eaten during this festive day include poblanos stuffed with minced pork and foods that match the colors of their flag – red, white and green.

In current dollars, the cost of our battle for independence from Great Britain was $2.6 billion.  For comparison, Americans will spend $1 billion alone on alcohol for July 4th and another $7 billion on food.  Within those numbers, approximately $800 million will be spent on chicken and beef while $116 million will be spent on cherries and $83 million on watermelons.  All of this will be washed down by more than 70 million cases of beer with 85% being domestic in origin. Meanwhile, more than 300 million pounds of fireworks will be lit.

Twenty-six percent of us will travel for the holiday of which 84% will be using cars.

To you from me and everyone at CV Weekly, have a fun, festive and safe Independence Day.