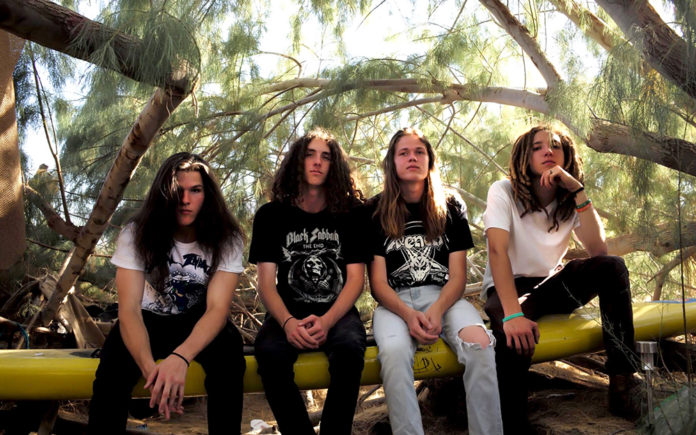 This Friday, May 25th, the guys from Instigator will be celebrating  the release of their new, self-titled demo at The Hood Bar and Pizza in Palm Desert along with fellow rockers, Minor Emergency and Frank Eats the Floor. It’s been just over a year since Instigator blew up on the scene as the new, kick-ass, thrash-metal band that blew both judges and spectators away when they became finalists at the CV Showcase. Their skills as musicians were definitely enough to impress their audience without adding the fact that they all happen to be teenagers. That’s right, folks…these La Quinta High School students are already blowing minds and melting faces and aren’t stopping anytime soon. There is something to be said about a group of kids who are playing a metal show in Hollywood one night and literally have to be in class the next morning.

I sat down with the guys to discuss their journey thus far.

CVW: So how did you guys initially find each other and start making music?

Jaxon Fischer–age 17–(Rhythm guitar/vox): “Mark and I met freshman year and we were both into metal and playing guitar so we would sit around and make riffs and play songs together. We did that for a while and I think it was during our sophomore year we decided we needed to find a bassist and drummer so we could get serious.”

Garrison Calkins–age 17–(bass/vox): “Sometime in Oct, 2015 I posted a video of myself playing bass on Instagram. I had maybe been playing for a month or 2. One of the guys followed me on IG and saw it and they knew where I sat for lunch every day. We would pass each other and make comments, but never really talked before the day they approached me at lunch and asked me if I wanted to come over and jam with them on Friday. When I showed up I don’t think I knew how to play any full songs except for, ‘For Whom the Bell Tolls,’ by Metallica. We kept jamming continuously for several months until we finally got Joe.”

Joe Boomer–age 17–(drums): “I was just hanging out at school one day when a bunch of kids came up to me and said, “You’re a drummer, right?” And I was like, “Yeah?” And they said, “You’re coming with us to jam today.” And I did. That very day. It was quick and simple.”

CVW: What inspired a group of High Schoolers to seriously pursue becoming a metal band?

Mark Wadlund–age 18–(Lead guitar/vox): “Basically I think the desire and intentions were always there from day one. We were really inspired by watching early videos of all of our favorite bands such as Megadeath circa 1985, Slayer, Venom and Exodus. Watching that stuff made me personally think, this is what I want to be doing. This is something I want to be a part of. The sounds of the guitars, the loud and fast drums…It’s all so exhilarating.”

CVW: When talking about the music that inspires you, you are talking about music that generally came way before your time. Considering what’s on the radio these days, how did you guys get into classic metal in the first place?

Joe: “We have different influences as individuals, but the common thread among us was metal. I came in from a lighter side of things being into alternative rock and punk and these guys sort of exposed me to metal. The key I think is high-energy music.”

Mark: “For me, I would say a lot of it started by going through the parent’s old CD collections in drawers or in the car.”

CVW: Speaking of parents…I think it’s pretty obvious that in order for a group your age to pull off being in an actual, functioning band, you must have to have some pretty supportive parents, right?

Mark: “Yeah, for sure. It’s been a lot of work for them to I guess and it hasn’t always been a perfect situation but, yeah, your right. For the most part they all have been really supportive which has been important to make this all possible. I mean the main thing with the parents has been about us keeping our grades up and school being a priority which can be hard.” (Entire band nods in agreement.)

CVW: So let’s talk about the new demo!

Joe: “We got really lucky to know Brian “Puke” Parnell of Regurgitation Records who was willing to help us out with our first real recordings. He invited us up to Idyllwild to record and we had such an amazing time I wish it was still happening.”

Garrison: “Brian is really an amazing guy that we have learned so much from. He is kind, caring, inspirational, and has become like a big brother to us. I personally look up to him a lot and want to be more like him.”

CVW:  Brian is really part of an extended music scene that really seems to have embraced you guys from the get go. How does it feel to be High School students by day and members of a thriving music community by night?

Jaxon: “It is really cool to be a part of something bigger than yourself. To meet people who are sincerely into what you are doing and visa-versa. We tend to have a lot more in common with the adults we meet in other bands than the kids at school sometimes.”

Garrison: “Every member of every band that we have met has been so warm and kind to us. We haven’t dealt with any attitudes or egos whatsoever. In fact it’s been the complete opposite. It seems cliche, but it’s all about the music. Our experience so far has been very humbling and we are truly honored to be doing what we love.”