Much like budding bands Pescaterritory and Silver Sky are doing for the Rock scene in the Coachella Valley in 2020, Intel$ is accomplishing the same for the desert’s Hip-Hop and Rap scene.

The powerful pair of Yungbc (Bannon) and King D-Roc (Derrick) are 18 and 17 years old respectively and are the new generation of musicians using Hip-Hop and Rap as a platform to minister their understanding of life thus far. 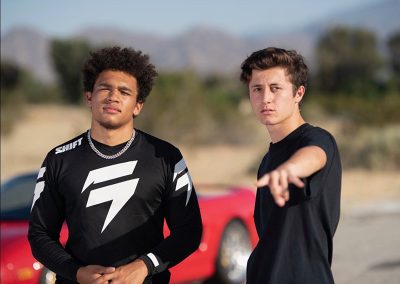 Their album “92260” was released on Friday, June 26, 2020, on all major platforms and is a profound mix of 14 songs that features collaborations with local Rap hero Lootenant and two songs with songstress Evelyn Kircher. The album’s title references the zip code for Palm Desert, California, some say the center and birthplace of “Stoner Rock” thanks to bands like Kyuss and Unsound, and now possibly a launching pad for the next breed of breakthrough Hip-Hop and Rap artists.

Coachella Valley Weekly spoke with the duo on a number of subjects via Zoom. 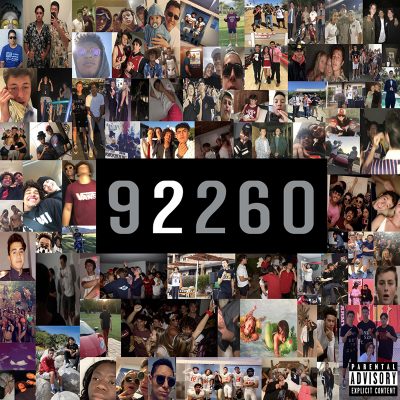 “This album was really confessional. We got out what we wanted to say and talk about. When people listen to it, we want them to really understand that this is not some typical thing to get a ‘hit’. We want it to mean something when we rap and make a song and we just all want it to tie together so it’s one big message. That was the main focus upon every one of the songs. We sat down, wrote lyrics and thought about what we wanted to say to people and ourselves and to prove something to ourselves. It’s been a lot of building our emotional ways and everything that we’ve been through and our perspective. That’s what we want people to hear.”

“I want our music to be different. You look at two teens from the Coachella Valley and you think we’re just kids. We’re kids that love making music and we want to preach our word. This album was a two-year long process as far as getting songs together. It was a lot of emotions and a lot of bumps in the road. I want people to be in their own world when they listen to our music, I want them to get lost and understand what we’re trying to say. There are so many songs on this album and our past music that have so many different meanings. People can make their own assumptions. On the album cover there are 65 different people as a collage. We really wanted to represent the 760 and what we’re about. I think some artists can shy away from their roots but we want to put our name on the map. ‘Party’ was the song that completely blew up. That changed how people looked at us when it came to music and we became well-known. I also had a couple of solo songs that did really well and in putting together this album, it really paid off.” 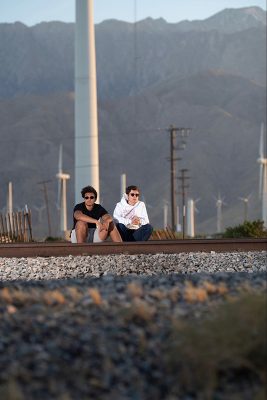 “I like to think of us as an ‘odd future-esque’ style that we do. If you go back to 2011 there were a bunch of kids from California who would cuss like crazy. They are some of my heroes and favorite artists and they really sculpted me as an artist. I feel like we’ve calmed down a little in the cussing than we used to but I think it’s good to put people in an uncomfortable position listening to our music. I want our music to not be just someone else you hear on the radio, I want it to be the most different music you’ve ever heard.”

“With the protests and pandemic going on, is this right time to release new music? We did consider what was going on. We weren’t trying to be selfish. I think it was a perfect time to put this album out. I don’t care about streams and numbers, we care more about the safety of other people and justice being served. We want happiness in the world. I believe people want music. We’re making more music. I think that’s the key. With this album, 90% of the time, Derrick and I weren’t together. The only two we recorded together were ‘Upset’ and ‘G.O.O.D.’ There were a lot of 7 hour calls. We’re not stopping.”

“I miss it 1000%! I think I can speak for a lot of Coachella Valley artists, if you look at all the venues out here, there aren’t many, but we support them;

Coachella Bar, The Hood Bar and Pizza, Bart Lounge and Flat Black Art Supplies. I performed a 20 minute set at Bart but was kicked out right after, it’s all good, I understand. Because of our age, it was hard to get shows. We had to get creative. We had to pester a lot of people to listen to our music and hear what we’re about”.

“That name came from Derrick. It means to find a different meaning. We’re giving you the ‘intel’ and the information. All credit to Derrick, he’s more affiliated with Hip-Hop, he grew up in North Palm Springs. I learned to play piano when I was 4 and carried that on through 8th grade. Derrick and I started making music together in my sophomore year at Palm Desert High School. We were solo artists at the time. I became enamored at a Rap battle in 8th grade. There was no beef between Derrick and I, we just recognized each other. We put out a song called “Worth Your While” and it took off from there.”

“I’m extremely conscious of it but I don’t ponder it too much or think about it 24/7. It just makes me more different than the rest. You don’t come across a lot of White Hip-Hop artists. The only ones I think of are Eminem, Macklemore and Logic. I’ve never really had an issue with it. I portray myself as Yungbc and Derrick is D-Roc and we’re just two kids making music and having fun. We’re proven and it’s showing.”

“Tyler, The Creator is #1, Kid Cudi, Pharrell and N.E.R.D. are artists I’ve always loved. ‘Seeing Sounds’ is one of my favorite albums. I love 2000’s Hip-Hop, Ludacris and Mos Def are incredible lyricists and artists. The first album I ever listened to was ‘Graduation’ by Kanye West. I feel music in general is all over the place for me. I’ve always had a soft spot for Elton John thanks to my grandma. Piano in Hip-Hop is such a big deal to me. I try to incorporate that. At 10 I would play piano around the valley with my mom, she’s an incredible singer.”

“I had G.O.O.N.S, Evelyn Kircher, she’s from Oregon and affiliated with our record label Myriad Productions, and Alex Kiner sang on ‘Mixed Emotions’, one of the bigger songs on the album. I have more stuff on the way featuring her so I’ll have a busy summer.”

“I understand the impact that Kyuss and Josh Homme has had on this desert. I’ve heard those stories of the generator parties. Those were the lengths that those artists took. It’s the same thing with us. I wish I was alive during the 90’s. I feel like people need to be more open to Hip-Hop. This can be a very ‘Rock’ town, if there were some venues who opened their doors to Hip-Hop artists the crowds could be huge.”

“They are the most driven group of people. I feel they are underrated as hell. Before the pandemic they were doing shows once a week. When I first met them, they had a song called ‘Vibe With Me’. I loved the beat and song. It hit a different corner with me. I hit up Stevie and I asked if I could do a remix, I didn’t tell them what my verse was, I recorded it once and they were taken aback. I like Stevie’s ideas and how his mind works. You either treat this Rap stuff as a hobby our as a 9-5 and I think Stevie, Sonny, Dom and Slum work hard, they are recording until 2 or 3 in the morning! They don’t even start getting ready until midnight. They are people I show love to and they made my album incredible. Shout-out to G.O.O.N.S.”

“Lootenant is a different breed. He pushes me to such a different level. His story, in general, is insane. He’s one person that has really uplifted the Rap game here in the Coachella Valley. He has allowed a lot of people to appreciate Rap. His first cypher was incredible. He doesn’t care what other people think, that’s what’s so tight about him. The song ‘G.O.O.D.’ is one of the best songs on the album. LOOT is someone everyone loves. He’s a fun guy to be around. His 2PAC show brought the house down. Lootenant is an incredible figure and person. He’s one of my favorite artists. He’s one of the nicest guys I’ve met. I was scheduled to participate in his next cypher but due to the pandemic it didn’t work out.”

A Year From Now

“I see myself still making music and looking beyond the Coachella Valley. With our youth, where we stand, how we work and push ourselves, we can go to unprecedented levels. Having fun, being myself and making sure I’m OK is another plan. We don’t do the weekly shows because we’re not 21. We’ve made so many sacrifices for the music. I’ve waited 18 years to be where I am today. I hope people can see the passion we put into it. We are the voice.”