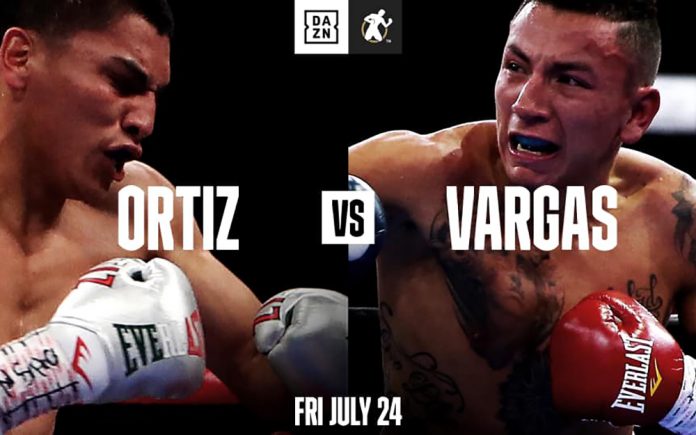 Golden Boy Boxing returns to Fantasy Springs Resort Casino on Friday, July 24th with WBA Gold Welterweight Champion Vergil Ortiz Jr. (15-0, 15 KOs) defending his title against Samuel Vargas (31-5-2, 14 KOs) in the 12-round main event. The fight, which was initially planned in March, will be closed to the public as part of Fantasy Springs’ ongoing COVD-19 precautions, but will be streamed live on DAZN.

“Preparing our comeback hasn’t been easy, but we have a responsibility to our fighters and our fans to stage high-level boxing events as soon as we possibly can,” said Golden Boy Chairman and CEO Oscar De La Hoya. “This card demonstrates our commitment to presenting competitive fights despite current circumstances, as the future of boxing, Vergil Ortiz Jr., will step into the ring with Samuel Vargas.”

Since making his professional debut in 2016, Ortiz has knocked out every opponent he’s faced. The Grand Prairie, Texas native (with roots in Michoacan, Mexico) is coming off a spectacular 2019 in which he stopped the likes of Mauricio “El Maestro” Herrera, Antonio “Relentless” Orozco and Brad “King” Solomon.

“I’m very thankful and excited to be headlining the first Golden Boy event after the quarantine,” said the 22-year-old rising star. “I’m happy that it’s still with the same opponent, so basically we’re picking up where we left off. It’s going to be a tough fight, and it’ll be a great way to kick off the year for me.”

Vargas is recognized as one of the toughest challengers in any division. The 31-year-old native of Bogota, Colombia has faced a who’s who of top welterweights, including Amir “King” Khan, Luis Collazo, Danny “Swift” Garcia and Errol “The Truth” Spence Jr.

“I think this time off benefited me, said Vargas. “I’m ready to upset the world… The show will be different. There will be no fans. But I have no doubt that I am going to win.”

Hard-hitting welterweight prospect Evan Sanchez (7-0, 6 KOs) of Parlier will open the night of action in a six-round fight.