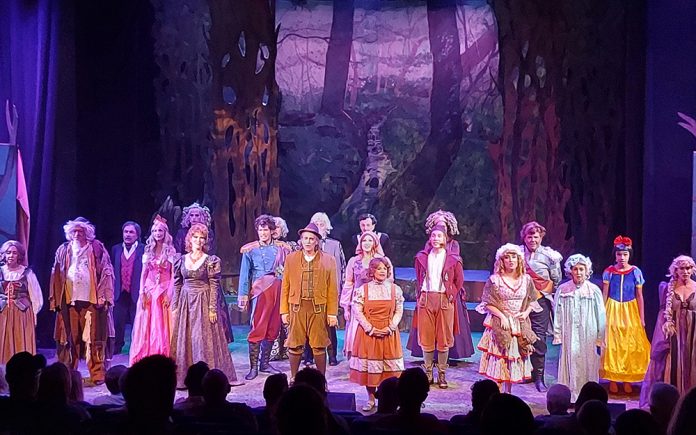 Palm Canyon Theatre, hits a fantastical homerun with their current production of “Into the Woods.” In a forest filled with wishes come true and shattered dreams, you’ll find painted trees looming ominously, casting shadows on fairytale characters who have been cursed and are in search of magical solutions. With the first note of music, the first utterance of dialogue and the first sight of characters, the theatre is transformed into a magical world. 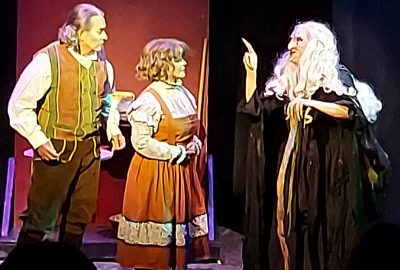 Into The Woods, with music and lyrics by Stephen Sondheim and book by James Lapine, gives insights to the analysis of Bruno Bettelheim’s book, “The Uses of Enchantment: the meaning and importance of fairytale,” exposing the dark underbelly of the fairytales we grew up with.

The story’s Narrator, (Stan Jenson,) helps weave together the plots of several tales from the Brothers Grimm and explores the consequences of the characters’ wishes and quests. The main characters are Little Red Riding Hood, (Leslie Benjamin,), Jack, (Anthony Nannini,) and Jack’s mother, (Laura Farber,) from the tale of Jack and the Beanstalk.  Cinderella, (Ana Rangel,)

Rapunzel, (Nikki Hock,) and her mother the Witch, (Se Layne,) from the fairytale Rapunzel.

This story is tied together by the tale of a childless baker (David Brooks,) and his wife, (Francesca Amari,) who discover that they are baron, due to a curse cast by a witch.  The two set about on a quest to undo the evil magic that keeps them childless. Their journey takes them through an enchanted woods and involves interactions with all of the other storybook characters during their journey. 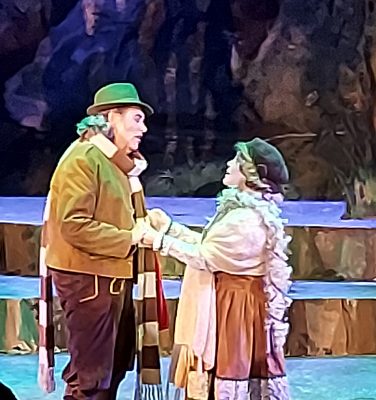 Into the Woods, is a metaphor for life in many ways, but the most prominent one is the woods symbolizing life itself. Good, (the Baker, his wife, Red Riding Hood, Cinderella,) versus evil, (the wolf, the witch, the giant,) interacting and impacting the direction their lives take.

The show first debuted at the Old Globe Theatre in San Diego in 1986 and had its Broadway opening in 1987.  There’s no question as to why this multi-Tony Award winning show was a hit. It’s a world of fairytales that targets all ages.  It explores the stories of Cinderella, Jack and the Beanstalk, Little Red Riding Hood, Rapunzel, a baker, a witch and even a cow.  It examines their journeys and desires, their wishes and their choices, but it’s so much more than a fairytale.  The music will lift you up and the characters will have your eyes glued to their every move.

It’s near impossible to talk about this cast as individuals.  They moved and sang and danced, as the well-oiled fantastical storytellers they are.  David Brooks owned the stage in his role as the Baker.  His singing was masterful and he gave a standout performance as a man in search of truth in a world where nothing is a simple as childhood fairytales.  Francesca Amari, is a phenomenal talent and captivates in her role as a character with real human foibles.  Amari’s known for her singing talent in the desert and she excels when infusing that love for song into her engaging performance. The chemistry between Brooks and Amari was palpable.

Se Layne, portrayed the Witch, a central and leading character, whose evil curse was the catalyst for the story. Layne, is by far one of the most outstanding singer/actresses in desert theatre and her performance was flawless. She seamlessly transitioned from the ugly, twisted embodiment of evil, into a beautiful, (still evil) charismatic character. She was the center of any scene in which she appeared. 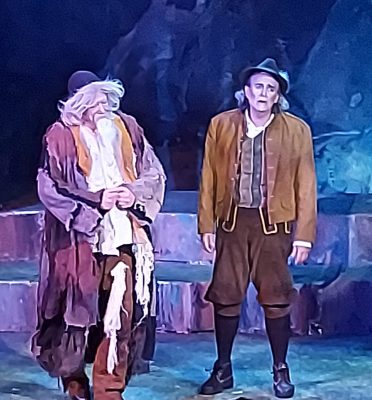 I was unexpectedly captivated by Red Riding Hood, Leslie Benjamin, who gave sass, attitude and strength of purpose to a character that has traditionally been portrayed as a victim.  Stan Jenson, is a favorite as the Narrator. Jenson, is a gifted actor who makes any role his own. Kam Sisco, in the role of the Mysterious Man, was so much fun to watch.  His intermittent appearances brought a genuine levity and intrigue to the storyline.  There is not the space to sing the praises of every individual member of this cast, each and every one of them were just incredible.

The one casting choice that did jump out at me and left me confused about the reasoning was, Cameron Keyes in the female role of Cinderella’s step-sister Lucinda.  Keyes, is a wonderful actor, but casting a male in this role seemed to serve zero purpose, added nothing to the script and was actually a bit distracting.

Make-up, sometimes an under-appreciated art, was absolutely stunning in this production and caught my attention immediately. The make-up crew consisted of Sandra Ibanez, Nayeli Lopez, Babesey Morrison and Anika Sanchez. These artists greatly enhanced the appearances and presentations of the characters and showed why this artistic contribution should never be over looked.

Derek Shopinski is the creative force behind this production, serving as director, choreographer and costume designer.  Shopinski, had the opportunity to showcase all of his talents in one glorious presentation and he excelled.  The inter-weaving of these characters’ dance movements was like watching a mountain stream flow seamlessly over and around and through the woods and Shopinski’s direction brought it all together in perfect harmony.  Steven Smith’s musical direction, and J.W. Layne’s scenic and lighting design were pure delights for the audio and visual senses.

If you are looking for a captivating, exciting night of theatre, go see Into the Woods!  Whether you go with friends, family, or just on your own, this is a wonderful night of theatre.

Into The Woods opens May 13th and runs through May 22nd.  For tickets, or more information, call the Palm Canyon Theatre Box Office at 760-323-5123 or order online: PalmCanyonTheatre.org.