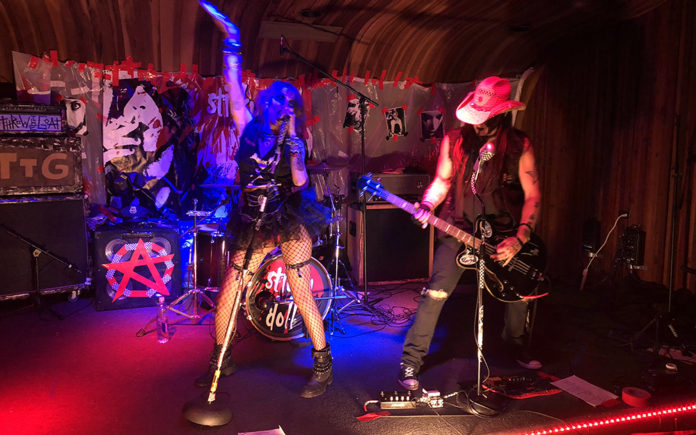 Stickyfest is a new and interesting take on an older idea here in the desert. Yes, it’s another desert festival, but it is unlike any festival that’s been done here. It’s also in one of the most unique venues in the desert. This is a punk and metal festival that takes place in Wonder Valley at The Palms. The venue is a pretty interesting place which from time to time holds shows, but is mostly unknown. The trip to the venue can seem like the trip to the Sawyer residence; if you’re not sure what I mean, google it. Once you arrive at The Palms, all doubts subside. It is an amazing venue with great beer prices and a unique and friendly customer base and staff.

For Stickyfest founder, Greg Gendron, this was the perfect place for an intimate and low cost festival. Gendron, El Sancho of the band Sticky Doll, is a relative new comer to the desert. He and his musical partner and singer in Sticky Doll, Cynna, moved from L.A. to the high desert about a year ago. They were told about the amazing music scene in the desert, and quickly realized that the scene they kept hearing about was the low desert scene. After making their way through the “venues,” they realized there wasn’t really a solid place to host metal and punk shows in the high desert. The high desert is host to a number of music festivals and shows, but nothing catered toward local metal and punk bands. Gendron decided he would do something about that.

Gendron would create a festival. This wouldn’t be a high ticket price festival; nor would it be a festival catered toward the more artsy crowd the high desert is known to cater to. This would be an in your face, low priced, metal up your ass festival in one of the craziest, awe inspiring venues anybody has ever come across. Gendron sent out an open call to any and all bands that fit this profile. It didn’t take long for the line-up to fill up. It was obvious by the response Gendron received from local bands that he wasn’t alone in his desire to showcase what the high and low desert have to offer in terms of rock ’n’ roll.

Coachella Valley Weekly: First, tell us a bit about yourself. You’re a relative new comer to our scene.

Gendron: “I am El Sancho, bassist/vocalist of a male/female vocal team of the band Sticky Doll. We moved up here to Yucca Valley from L.A. about a year and a half ago. Cynna (El Sancho’s partner and fellow vocalist in Sticky Doll) is from East L.A. I was born and raised in Yakima, Washington. We were sick of L.A. and decided to move here. We love it. Everybody said there was a great music scene here, but we found out it’s really the low desert. Don’t get me wrong, there are some talented bands up here, but the punk and metal scene isn’t that big. Pappy and Harriet’s isn’t really the place for punk and metal, and Cynna and I felt we couldn’t find a place to play up here. Everybody I met said I had to create my own scene. I finally took their advice. We fell in love with The Palms out in Wonder Valley. They’ve got a big outdoor stage.”

CVW: Is that how the idea for Stickyfest came to be?

Gendron: “Yes. I was out there and thinking, this place needs to host a fest. I reached out to a friend, Gary Faust, who has a company in L.A. called Live Wire’s Live Sound. He does sound for events. He was into the idea and offered to bring his stuff up. This is how I can keep ticket costs down too. I didn’t have to pay for the sound. All these festivals up here are extremely expensive… hundreds of dollars. Then, you have to pay for the camping on top of that. I put out an open call on Facebook for bands and was inundated. I got 40 bands right away. A lot of them were from L.A. and Orange County, but I wanted this to be more local. Having local bands also keeps the price low. Tickets were $10. Now they’re $12. Camping is free. This is all out of pocket for me. I want this to be a DIY festival.”

CVW: Who are some of the bands?

CVW: Man! That’s definitely the who’s who in desert music.

Gendron: “It’s an amazing line up. Honestly, a few of them I hadn’t heard before they reached out to me about Stickyfest. They’re all really good.”

CVW: I’ve heard of Instigator before tonight, but, holy shit, those kids are amazing. I was floored. How do we get tickets to Stickyfest?

Gendron: “I gave every band 30 wristbands and told them to sell them. I was going to split the money 50/50, but last week, I just told the bands to keep all the money they make off their wristbands. I set up the main Stickyfest event page on facebook, and then gave each band playing their own Stickyfest event page with a unique link to tickets so we can track who sold what tickets. So support your favorite band, and buy a ticket through their event page. In reality, I just want people there. I want it to be a successful, well attended event. I want this to continue every year. I’m not trying to pad my pocket, I’m trying to bring attention to Sticky Doll and all of the other bands. I want to help out this scene. It was really important for me to bring the low desert bands up here so the high desert people can get a taste of that scene.”

Gendron: Also, Sticky Doll supports our local no kill shelter. We’ve got a list of items the shelter needs. We’re going to set up a discounted ticket for people who bring in items from the list. Plus, in conjunction with the Marines’ birthday, all active and non- active military will get free entrance with proper identification. It’s an all ages show too. Bring the family. Anybody under 16 is free.”

Stickyfest takes place on Saturday, November 10 starting at noon. Located at The Palms Outdoor stage 83131 Amboy Rd. Twentynine Palms, CA. Military and under 16 are FREE. All ages Show. Advance tickets are $12.00 and $15.00 at the door.