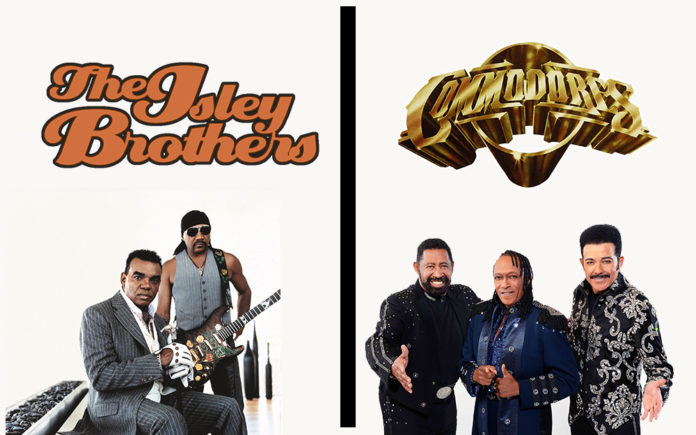 The Isley Brothers and The Commodores are legends of R&B music. With decades of hits between them nobody comes close to matching their musical output and both superstar groups will be sharing the stage for one night of incredible music at The Special Events Center at Fantasy Springs Resort Casino on Saturday, October 7, 2017.

The Isley Brothers formed in 1954 and almost immediately achieved success with their early iconic single “Shout.” The group continued to find acclaim with such classics as “Twist and Shout,” “Caravan of Love” and won one of their four Grammy Awards with their hit “It’s Your Thing.” The group has more than two-dozen gold, platinum and multiplatinum singles and albums; countless awards; and was inducted into The Rock and Roll Hall of Fame in 1992. In 2003 they released their latest album Body Kiss, a sensual R&B album with pop influences featuring collaborations with Snoop Dogg and Li’l Kim.

For three decades, The Commodores have remained a force in the music industry and just like their song “Brick House,” they have created a foundation that just won’t budge. In 1968 the group was formed while all the members were in college at Tuskegee Institute. After being discovered by Berry Gordy of Motown Records, The Commodores went on to sell over 70 million records for the iconic label. With hits like “Machine Gun,” “Easy,” “Three Times A Lady” and the Grammy-award winning “Night Shift,” The Commodores became a proven success. Today the Commodores not only stand as talented and successful musicians but as artists determined to continue their success into the future.

Saturday, October 7th will see The Isley Brothers and The Commodores bring an R&B and Motown explosion to The Special Events Center at Fantasy Springs Resort Casino that is not to be missed.