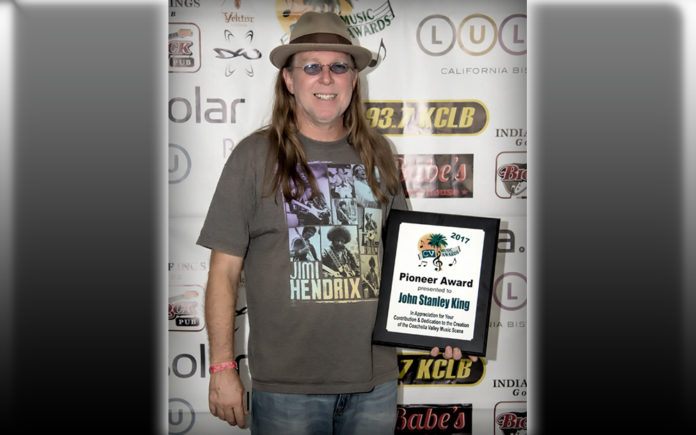 Some artists in this town are legends and John Stanley King is one of them. He and his brother Ronnie King just won the Pioneer Award at the CV Music Awards, which is another in a long line of awards he has won over the last few years.

Historically the King family has been at the forefront of the music in the Coachella Valley. John’s easy going style which is a mix of jazz, soft rock and originals, is popular in many of the top venues in the desert. His entire band performs with him on his signature gig at Vicky’s of Santa Fe. He starts back there at the end of September. This hotspot has a real stage and great jazz. On Friday nights he performs with his band. All of his musicians are from LA.

On Sundays he does the Great American Songbook from 6-9:30 with Rick Turner on piano.

On Mondays he will be at the Cork Tree from 6-9. He still performs at Rancho Las Palmas on Thursday nights, which he calls his ‘acoustic evening’ from 6-10 pm, outside if weather permits. This is a spectacular setting.

He’s been busy this summer taking time off to spend with his family while simultaneously recording his first CD in 8 years. It should be out in October in time for the season.

I used to go hear John at Escena a few years ago. I would encourage him to record a CD, one night he pulled the master of his last one out from underneath his car seat. I almost fainted (knowing the cost and value of the master). He’s got his own recording studio in his home, which has allowed him to work on it non-stop. He also just finished a photo shoot. He also did a 4 camera shoot and is enjoying editing a video for his new CD. It will contain some live recordings, some originals, and cover tunes. He plans to sell it to his customers who request it.

He just finished up an on radio interview with jimi Fitz about his brief encounter with Glen Campbell. He’s worked with many great artists and celebrities over the years. His goal is to land some festivals that he can play in during the summer months, but for now he’s a happy man.

John said he’d like to take this opportunity to thank Tracy Dietlin and Phil Lacombe for all the support they have given to him and the Coachella music scene. He’d also like to thank his fans for continuing to come out to hear him.

I’ve always enjoyed John’s very ‘cool’ style and his friendship means a lot to me. Congratulations John for your Pioneer Award. You deserve it.