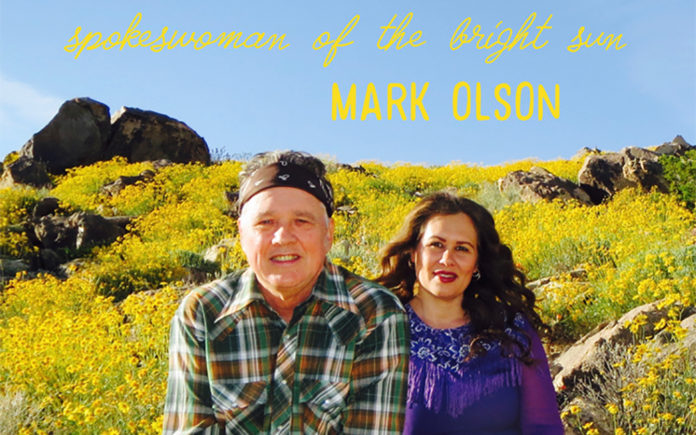 In “Remembrance Of Things Past,” author Marcel Proust famously bites into a Madeline cookie and is instantly returned to the sights, sounds, and tastes of his childhood. Sometimes listening to music transports you to another place. Not just where the music was made, but whatever surroundings or music inspired that music.

Take spokeswoman of the bright sun, the new album from Mark Olson and his partner in music and life, Ingunn Ringvold. One spin conjures up images of the desolate desert, the frozen prairie of Minnesota, rustic Topanga Canyon, the hymns of Norway and the traditional sounds of Armenia.

Mark Olson was born in Minneapolis, Minnesota in 1961. His family were farmers and teachers, around age 12, he began teaching himself to play guitar. Following the untimely death of his father, he spent his teenage years with family in Los Angeles. He returned to the Twin Cities and immersed himself in the music scene. There was a thriving club culture in the late ‘70s and early ‘80s. Sounds ranged from the Psychedelic Soul of Prince to the Hardcore energy of Husker Du and the shambolic Punk of the Replacements.

For Mark, musical inspiration came from classic Country like Hank Williams, Sr. and the Louvin Brothers, Country-Rock hybrids like Flying Burrito Brothers and Sir Douglas Quintet, plus Nashville Skyline era Bob Dylan. Connecting with like-minded musicians, Gary Louris and Marc Perlman, they formed the Jayhawks in 1986. The band made a splash in their hometown, releasing two critically acclaimed albums on local indie labels, Bunkhouse and Twin-Tone.

By the early 90s they signed with Rick Rubin’s Def American label. The sludgey sounds of grunge reigned supreme in 1992 when the band released their rustic masterpiece, Hollywood Town Hall. Their sound felt like a breath of fresh air.

The Jayhawks, along with Uncle Tupelo (which spawned Wilco and Son Volt), kind of invented the Americana, (or alt.country) strain of Rock N’ Roll. It seemed like a bracing antidote to the turgid, (albeit sensitive), down-tuned thrash that permeated the airwaves and MTV. The record received rave reviews and respectable sales; they gained even more exposure touring with Tom Petty.

By their next album, Tomorrow The Green Grass, the Jayhawks seemed poised for greatness, but Mark was ready to slow down. He had recently married acclaimed singer-songwriter Victoria Williams and the couple had relocated to Joshua Tree.

Following a tour with Neil Young in 1990, Vic had been diagnosed with Multiple Sclerosis. Although she continued to write and record, her condition made touring precarious. Mark and the Jayhawks parted ways, in part so he could monitor Victoria’s health. Of course Joshua Tree is the perfect spot for creating music. Pretty quickly Mark, Vic and multi-instrumentalist Mike “Razz” Russell formed The Original Harmony Creekdippers.

The trio self-released their homey debut in 1997, and doubled-down on their winning sound a year later with their sophomore effort, Pacific Coast Rambler. In 1999, they recorded a third album, Zola And The Tulip Tree. As the 21st century dawned Mark signed with respected indie label Hightone and released his first bona fide solo record, My Own Jo-Ellen.

In 2002, he switched to another indie label, Dueltone, and December’s Child was credited to Mark Olson And The Creekdippers. 2004 saw the release of the final two OHRCD albums the surprisingly topical Political Manifest, and the more bucolic Mystic Theatre.

Sadly, Mark and Victoria’s marriage dissolved in 2005. That also put an end to their musical partnership. Mark’s heartbreak was chronicled in the quiet atharsis of his 2007 album, Salvation Blues. Soon after he reconnected with Jayhawks co-founder, Gary Louris.

The partnership of Mark Olson and Gary Louris yielded an excellent duo album, Ready For The Flood, produced by Black Crowes front-man, Chris Robinson, and released in 2008. The next year Mark released Many Colored Kite, and 2011 saw a full-fledged Jayhawks reunion that produced an album, Mockingbird Time and an extensive tour, (that included a set at the 2012 edition of Stagecoach). But ill-feelings resurfaced and the Olson-Louris partnership came to a rancorous end.

Six years earlier, Mark had embarked on a solo tour through Norway and Sweden. After a show in Bergen, he met Ingunn Ringvold. A talented musician in her own right, she and Mark connected personally and professionally. Soon, she was accompanying him on djembe and acoustic guitar. She appears on both Salvation Blues and Many Colored Kite.

Convoluted Visa issues kept the couple out of America and Norway. As they dealt with bureaucracies, they bided their time in Armenia. They fell in love with the culture and the music. Their travels heavily influenced their excellent 2015 album, Good-bye Lizelle. After several months on the road here and abroad, they returned to Joshua Tree and began work on Mark’s fourth solo effort, (and 17th album overall), spokeswoman of the bright sun.

The record opens with the sunshiny charmer, “Dear Elisabeth.” Breezy bass lines connect with twinkly percussion jingle-jangle guitar and sylvan strings. Sweet-sour harmonies and the sweeping melody cushion lyrics that decry the gossipy nature of small towns. Mark cautions there’s “no one to write your soul” and not to dwell on the past, “don’t look back and pull the weeds.”

Childhood memories are at the forefront on the title track And “Seminole Valley Tea Sippers Society.” “Spokeswoman…” blends dreamy strings, prickly qanon fills, rumbling bass and tambourine shake percussion. Stream-of-conscious lyrics reference a vivid dream Mark had about his Irish Grandma speaking Gaelic. Her spectral presence prompts him to confide “I like going where you’re going, doing all the things you like to do.”

“Seminole…” is powered by kaleidoscopic mellotron, plucked strings, a propulsive rhythm and sidewinding acoustic and electric guitar. Lyrics like “Tall buildings in Iowa were made of stone, schools were made of stone, churches lovely sandstone,” draft off sharp recollections of Mark’s mother’s hometown of Cedar Rapids, Iowa.

Musically, three tracks time-travel back to the Psychedelic ‘60s: “Time Of Love” blends jangly guitar, swelling strings, mellotron notes that shapeshift from lush to trippy, a galloping back beat and roiling bass lines. The lyrics insist that without love as an emotional anchor, it’s easy to lose “your peace of mind.”

Thundering drums and nettlesome strings open “You Are All.” The intricate arrangement and candy-coated instrumentation echo Brill Building songcraft and Wrecking Crew musical prowess. But much like Joni Mitchell’s “Both Sides Now,” the presence of “candy sand castles” and “a lollipop sky,” can’t camouflage the song’s melancholy undercurrent.

“Nicola” offers an oblique recollection of the Topanga Bluegrass fest Mark attended as a teen. Something of an aural snapshot, it captures that gray area between innocence and experience. Click-clack rhythms anchor swirling strings, chamberlain, dulcimer, plus Mark and Ingunn’s intertwined harmonies.

A stand out song here is “Mary Frances Strong.” It’s a tender encomium to Mary Frances Strong, the author of the invaluable “Desert Gem Trails” book. Wistful and beatific, it opens with rattling bongos and folds into a pulsating rhythm accented by twinkling percussion and pastoral mellotron and chamberlain.

Both “Gravity Loss” and “All My Days” gain emotional nourishment from the desolate surroundings of Joshua Tree, and the satisfaction of manual labor. On the former, Mark and Ingunn’s plaintive harmonies lattice over layers of plangent guitar, rubbery bass and cascading percussion. The desert is “Where my life starts again.”

The latter is a handclap-y cha-cha-cha propelled by off-kilter percussion and ringing guitar. Passing by “the house we knew, painted once in June,” Mark is reminded of the sense of accomplishment that accompanies spilled paint, sweat-equity and the laughter involved in repainting a house.

The album closes with “Death Valley Soda Pop Cool Down Dream.” The lyrics circle back to the same theme explored in the opening track: gossip and hearsay are toxic habits and abhorrent professions. Qanon notes dart and pivot through the suite-like melody, like a fluttery hummingbird, enveloping languid mellotron and chamberlain runs and rippling guitar; an ambitious finish to a wonderful record.

spokeswoman of the bright sun was handcrafted in Joshua Tree. Mark created the songs on their back porch, he and Ingunn recorded their parts on a Nagra field recorder. He played acoustic and electric guitars plus the dulcimer, she handled mellotron, chamberlain and qanon, (the traditional zither-style instrument, prominent in Greek, Turkish and Armenian music). Superstar drummer Danny Frankel added all the percussive touches and Lewis Keller provided bass.

Of course, special attention should be paid to Mark and Ingunn’s symbiotic vocal blend, which echoes ‘60s antecedents like Grace Slick and Marty Balin from Jefferson Airplane and Mama Cass and Denny Doherty from the Mamas And The Papas.

Mark Olson has been making music professionally for more than 30 years, either as part of a band or a solo artist. Each album feels like a mile-marker charting the course of a richly nuanced musical journey. The inherent beauty of spokeswoman of the bright sun is it honors the past but continues to look forward.

(Following their Australia/New Zealand tour, Mark and Ingunn will be playing a secret show in Joshua Tree on November 10th. Look for more details at markolsonmusic.com).