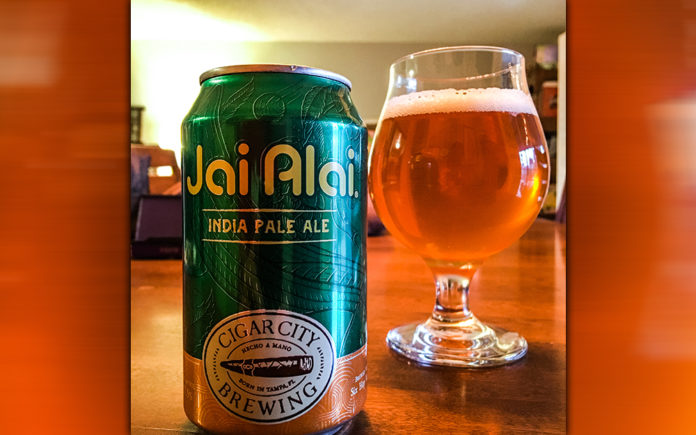 One of the more notable IPA’s I’d heard of but never got to try, was Cigar City’s Jai Alai IPA. I am an advocate of drinking local, and will support California brews over out-of-state breweries. Let’s put it this way, I consider a beer from Vermont to be an import. I bleed red stars and brown bears on a flag. West Coast is the only coast, Cali all day, son!! 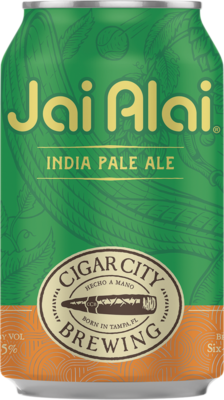 But it was still a treat to see that my local Trader Joe’s was now carrying the flagship IPA from Tampa, Florida’s heralded brewery. Instagram had piqued my interest with the many users who post photogenic images of the green and yellow can, and I couldn’t wait to share my thoughts on the brew, and rate this beer on a 5/5 system.

As I open the can and pour it into a pint glass, an intense orange peel and tropical-hop bouquet hits the nose, a bright and citrusy aroma that promises good things. The malt is there and is just as assertive, a layer of cereal grain and cooked sugar, layered right under the hop smell.

The newest style of IPA is the hazy, which can almost look like a glass of calcium-enriched orange juice with all the rich and swirling cloudiness that the style provides. There’s none of that here with the staunchly-filtered Jai Alai. A crystal clear, golden color shows this to be a classic style IPA, with nice lacing and a pillowy white cap of foam that disappeared quickly. Nothing out of the ordinary, and impossible to pick apart from any other classic style of IPA. Nothing wrong with that at all; it’s conventional in appearance and was made to be so.

The first sip yields the flavor of clementine; those little oranges known affectionately by the brand name “Cuties”. A resiny hop flavor recalls pineapple and cantaloupe before washing into a bitter and lightly astringent, assertive bite.

Jai Alai packs 70 IBU’s into this beer, and there’s no doubt that this beer is given a generous bittering addition of hops. This is a monument of classic style that doesn’t play to current trends.

Like all classic American IPA’s, there’s a caramel note to the malt profile that gives an almost marzipan-like flavor to the malt profile. I’m used to the new school of IPA’s that forsake the cooked sugar flavors that were a staple of IPA’s throughout the 90’s and recent-2000’s. It distracts and takes the shine from all the complex flavors that come from hops, but that’s just the west coast lover in me.

Jai Alai is full bodied with an almost-soft level of carbonation, and has a richness to it that affirms its 7.5% ABV. It coats the tongue and is as substantial as any IPA a I can think of. Jai Alai passes for a double IPA, and might be considered so in the hands of another brewery. Kudos to Cigar City for keeping it real and brewing this one to the top of the style limits.

Overall this is an east coast beer that lovers of west coast style can still get behind. Beer snobs all too often mistake whalez for quality, thinking that hard to find means better in flavor. But Blind Pig, Hop Torpedo, Hop Stoopid, 60 Minute IPA, and Jai Alai are all widely distributed IPA’s deliver the bold and the bitter in the way that Hop heads love. I’ve only recently discovered this beer in my local isles, meaning it’s distribution deal is a new thing, and a good thing for those seeking a new IPA to experience. Definitely one I’d drink regularly, and lovers of any of the aforementioned beers will certainly agree that it’s a worthwhile purchase.