Jamestown Revival is the musical autobiography of two friends, Jonathan Clay and Zach Chance, who grew up together in Magnolia, TX.  While they ventured at solo careers, they never liked music as much as when they played it together, and as talented as they were, neither did their audiences.  Ultimately the two had the audacity to pick up and move to LA when everyone else was migrating to Nashville.  With whispers of Creedence Clearwater Revival blending in with the engrained Texas voices of Willie Nelson, the Everly Brothers, Guy Clark and Stevie Ray Vaughn, they each chased a sound that would encompass the South with classic American and Western rock.  Together, with a harmony quality and tone that is usually only genetically created, Jamestown Revival, in all their California soaked Texas charm, are going to make you fall in love with them at Coachella. 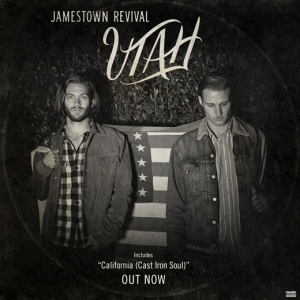 If Jamestown Revival’s autobiographical, soul grabbing, nakedly honest, first full-length album, UTAH, makes you like them, their down to earth, comfortable-in-their-own-skin demeanor, will add them to your life long playlist like a couple of old friends. In order to capture the spirit of the music, the two found a log cabin high within the Wasatch Mountains of Utah. The pair, along with their band and engineer, set out to convert it into a temporary recording studio. With wild moose right outside the window, and aspen leaves spinning in the wind, they tracked the 11 songs that make up UTAH. Performed live, with no headphones, and entirely to tape, the process captured the moments in the room.

CVW:  Exactly how and when did you start working together?

Jamestown:  We started relatively early, age 21, and toured as separate and solo artists, but when we played together, that’s when we got the best audience reaction.  And I guess you could say we were feeling a little bit uninspired about our solo careers.

CVW:  So what made you decide to move to LA instead of what might seem the obvious choice, Nashville?

Jamestown:  It really was not a big thought process.  There wasn’t a whole lot of deliberation.  One day we were like, ‘I kind of think we should move to LA’, and then we were like, ‘Ok, cool!  Let’s do it!’ It just seemed like the right thing to do.

CVW:  You guys are back in Austin now.  In retrospect, how did that decision work out for you?

Jamestown:  It was obviously one of the best decisions we ever made; being we just started the band, it provided us a lot of material to pull from.  It was good for us to be away from home, and be uncomfortable. It was probably the most influential thing we’ve ever done for our musical career.  The combination of the California sound, combined with where we were personally, who we were listening to and what we were writing was all pivotal.  We focused on our place in the world there, and it solidified our identity.  That is something that has travelled with us even back in Texas now, and will stay with us forever.  That is the coolest thing, we really discovered ourselves.

CVW:  What has been your favorite part so far?

Jamestown:  Selling out the Troubadour for two nights in LA was beyond awesome.  If you would have told us that in three years time, we would do that, we would have called you a liar, and thankfully, you would have made a fool out of us.  That made us realize we were doing something that people were really connecting with.  Playing the ACL Festival in Austin…growing up in Texas, that was huge for us. Our past tour was incredible as well.  We sold out shows in Boston, Washington DC, New York, Seattle, Portland and LA…all across the country, there were people coming out to see us in sold out rooms.  We’ve played for years to 20 people.  For that to turn into 500…, we can truly say, we are totally appreciative for each and every person in that room.

I still can’t believe we’re playing Coachella!  That’s another thing…I would have never thought we were cool enough for Coachella.