While these guys have been labeled a “German Folk Duo”, do not let your predeterminations of what that might sound like fool you and keep you from discovering something kind of – well, amazing.  In fact, this band would be considered an Americana Roots Alternative had they been born here.  Still, the terms “Americana” and “alternative”, being the catch all descriptors they are, may still be too narrow in describing this kaleidoscopic fusion of genres.  Call me crazy, but as I listened to “Flashed Junk Mind”, “Running”, Down by the River” and “Stunner”, I swear I heard hints of Everlast and Weezer, mixed with equal parts of Death Cab for Cutie and Mumford and Sons, atop a reggae down beat plucked with bright folk-ecent flair.  To some, this may sound as unappealing as spaghetti tacos, but I assure you that it is as tasty and as innovative as the bacon wrapped, cheese and jalepeno, kosher hotdogs…on a pretzel bun.

Milky Chance is made up of Clemens Rehbein (vocals and instrumentals) and Philipp Dausch (production and DJing). Both originating from Kassel, Germany, they have several singles and one album on their own imprint Lichtdicht Records.  Their first single, “Stolen Dance”, was released in April 2013, peaking at No. 1 on charts in countries such as Austria, France, Belgium (Wallonia), Switzerland, Poland, Czech Republic and Hungary.  It also won the 1Live Krone radio awards for Best Single. 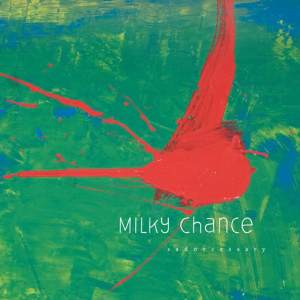 The duo’s debut album, Sadnecessary, was released in October 2013 and peaked at number 14 in Germany.  SPIN named Sadnecessary their Album of the Week.  The band made their TV debut on Jimmy Kimmel Live! in October 2014, and also won the European Border Breakers Award that month.  They toured the United States and Canada in late 2014, but as Rehbein explained, it was a very busy couple of weeks.  Their tour in America this year, will give them their first opportunity to really “be” here and take in the many parts of the US.

CVW:  How long have the two of you been playing together?

Rehbein: We met our Junior year in high school.  On that first day, you’re looking around the classroom trying to see who’s cool and who’s not…We clicked though. It didn’t take long at all for us to notice that we got along great.  We were in a band together that year with other people.  We’ve been playing together a little over 6 years now.

CVW:  I hear so many different influences when I listen to your music.  Who are your influences actually?

Rehbein:  (laughing) There are a lot of influences from the 50’s all the way through the 90’s and throughout the 21st century… Jimi Hendrix, Ray Charles, the Rolling Stones, the Beetles… a lot of bands.  But we also had a circle of friends back home – everyone is really into music and we would get to jam together.  We share a lot of different styles.  That kind of communicating through music is what made us like being musicians.

CVW:  You are constantly writing music that is, lyrically, very strong.  Do you ever get writer’s block?

Rehbein: Sometimes you have these moments, but then you just have to relax and take your time. Don’t hurry yourself, and just let things go.  Ideas come best when you feel comfortable and not stressed.

CVW:  With all the touring you’re doing, is it hard for you to continue writing?

Rehbein: Actually, writing on the road has been pretty easy.  We’ve been touring three weeks and I’ve finished three songs.

CVW:  What can we expect at your Coachella Fest performance?

Rehbein: It will be the three of us, Philipp Dausch and our friend, Antonio.  Antonio will be playing guitar, but he will also be playing the blues harp…that’s a special moment in our show for us.

CVW:  How has all this success treated you so far?

Rehbein:  It’s a situation you dream of.  It’s a privilege; not everyone gets this opportunity.  It is still surprising to us, so we work hard to give the people something back on stage.