Janet McAfee has had a diverse career, and feels blessed these days to work for causes that are near and dear to her heart. Her full time job with Loving All Animals as director of their Mobile Mutts program, involves rescuing dogs from kill shelters and finding wonderful adoptive homes for them. Working as a part time trainer at the 29 Palms Marine Base, she teaches workshops to separating service members on how to find a civilian job. The vast majority in the workshops are combat vets, whose only work experience might be working as a machine gunner in Afghanistan. Some have service connected disabilities such as post-traumatic stress disorder (PTSD), physical injuries, or traumatic brain injuries. McAfee’s sharp, intelligible mind and warm, overflowing heart are apparent within minutes of a single conversation with her and just might be why Janet has found herself among this year’s Top 12 Most Interesting Women of the Coachella Valley.

McAfee earned a Master’s degree in Social Work Administration and a law degree from John F. Kennedy School of Law. She interned for the San Francisco District Attorney’s office, and worked for the Attorney General’s office division of employment discrimination. She was employed as a Special Investigator. For many years Janet worked for the California Department of Vocational Rehabilitation, assisting people with disabilities obtain the equipment and job training needed to become employed. She then became the agency’s employment counselor assigned to work with disabled Veterans, as liaison to the Veterans Administration and Swords to Plowshares program for homeless Veterans. Janet explains, “Back in the 1980’s, we worked with Vietnam era Vets, many of whom were still struggling with PTSD and substance abuse. Later I worked with the Gulf War Vets, and today thousands of combat vets are returning from the Middle East conflict without adequate medical and psychiatric care from an overwhelmed VA. I love working with Veterans because they are so grateful, so motivated to succeed after sacrificing so much.”

In 2007, a chance encounter with a beautiful stray red colored Shepherd dog led McAfee down a path she never expected. An ardent animal lover, she was unaware of the overpopulation crisis with cats and dogs, and did not know they were still being euthanized by the millions in our public shelters. After feeding the young dog for 3 weeks and unable to catch her, she contacted various animal agencies for help. Finally reaching the Coachella Valley Animal Campus, our local Riverside county shelter, she relied on a dispatcher’s assurance the shelter was “virtually no-kill”. She recalls, “I visited with the Shepherd at the shelter, she remembered me and was so sweet. The shelter gave her a grade of B on her temperament test, and I tried to find her an adopter. I left town for a family funeral, and upon seeing her photo my Mom decided to adopt her. I couldn’t wait to get her out of the shelter, but I arrived to see an empty kennel. I learned the dog was euthanized the day before. My heart broke, and I cried for a month, and filed a complaint with the animal commission. I learned that at that time, the shelter was euthanizing about 50% of the animals, and that this was the case throughout most of the country. My mission became saving shelter dogs, always in the memory of the Red Dog.” 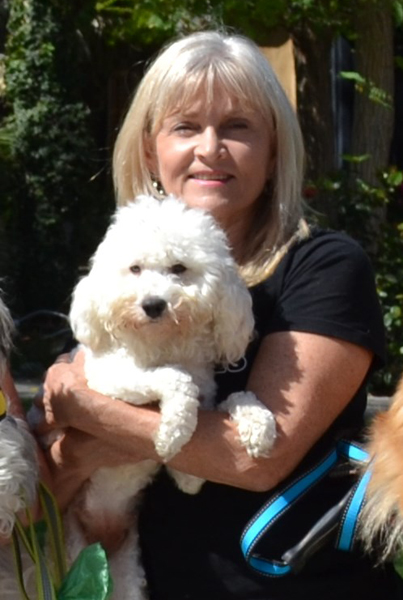 Janet met Lindi Biggi at an East Valley task force formed to address the problem of stray animals in that area. Lindi was forming a new animal welfare organization, Loving All Animals, an innovative group that would bring new and exciting tools to save shelter animals, including the first mega Coachella Valley pet adoption event that annually showcased 500 adoptable animals. This Most Interesting Woman was already rescuing a few dogs from shelters, but now under LAA, could develop a foster and vetting program to save more. Janet became a tour guide for the group’s doggie decorated limousine, taking prospective adopters to shelters, with the goal of making “rescue” a fun and educational experience.

Janet states, “The dogs know you rescued them, and repay you with loving loyalty. These angels in fur live in the moment with joyful optimism, teaching us humans that we too can overcome adversity and obstacles in our past. I write many of their stories in my CV Weekly Pet Place column, celebrating the dogs and the lucky humans who adopt them.” Janet McAfee’s passion and enthusiasm for her work is infectious, inspiring those around her and changing lives one pet and one vet at a time.