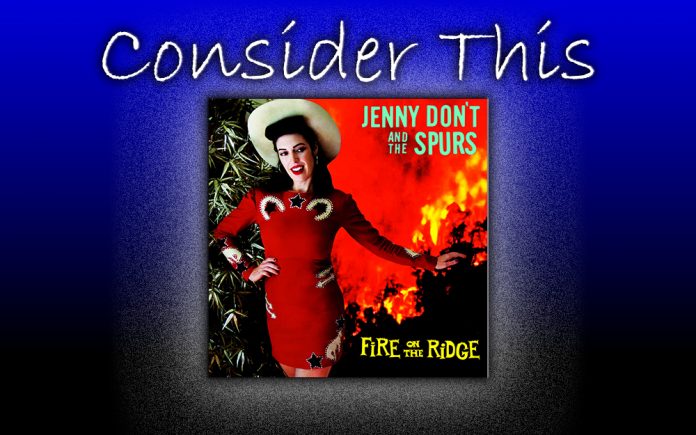 Somewhere between Kitty Wells, Wanda Jackson, The Knitters, Dead Moon and Tami Nielsen stands Jenny Don’t and the Spurs. The Portland, Oregon four-piece began life back in 2012 as a collaboration between vocalist Jenny Don’t and bassist Kelly Halliburton.

Jenny had already made her bones fronting her own band, DON’T and Kelly had been a fixture of the thriving Portland Punk scene. For a few years he juggled two gigs, splitting his time as the drummer in the Garage Rock trio Pierced Arrows and bassist for Punk progenitors P.R.O.B.L.E.M.S. Jenny and Kelly were both drawn to the raw and rootsy sounds of seminal Country legends like Ernest Tubb, Patsy Cline, Loretta Lynn and Hank Williams, Sr. On their own they worked up a set of crafty cover songs as well as clutch of sharp original compositions.

When Fred and Toody Cole (husband and wife, two-thirds of Pierced Arrows, as well as influential cult band, Dead Moon), discovered Jenny and Kelly’s new project, they offered them a supporting slot for a Pierced Arrows show. Looking to flesh out their sound a bit, the pair enlisted drummer Sam Henry. Jenny and Sam were well-acquainted, since he pounded the kit in DON’T, but preceding that he had achieved legendary status playing in first generation Punk bands like The Wipers, The Rats and Napalm Beach. After a couple weeks of practice, the live debut of Jenny Don’t and the Spurs went off without a hitch.

For the first couple of years, Jenny and the Spurs existed as a trio, but not by choice. They cycled through a series of guitarists who had couldn’t keep up with their punishing tour schedule. Finally, they recruited guitar-slinger Christopher March. Something of a road dog, he had spent years on the Northwest Honky-Tonk circuit, honing his Country and Rockabilly chops.

In the last several years the band has plied their trade in Punk clubs, dive bars, roadhouses and Honky-Tonks throughout North America and Europe. In between tours, they managed to record three long-players, beginning with their self-titled debut, as well as Call Of The Road and Live In Bonn. They have also released a slew of 7” singles. Now after an arduous couple of years, they’re back with their new effort; Fire On The Ridge.

The album opens tentatively with the title-track. It’s just Jenny’s plaintive vocals, wrapped around burnished electric guitar on the first verse, as lyrics chart a course for an epic journey home; “As the day is long and the night is dark, and the road goes on I’m comin’ home.” Before you can say giddy up, the rest of the band leaps in and it’s a swirl of blazing guitars, roiling bass line and searing pedal steel atop a blistering backbeat.

Although this record is steeped in Country goodness, several songs display the band’s deft command of seemingly disparate musical styles. “Restless Moon” hurtles out of the speakers like a Hawaiian Hillbilly hoedown. Breezy pedal steel notes echo and sway with a slack-key alacrity, over lithe bass lines gamboling guitar licks and a boot-scootin’ rhythm. Jenny’s lookin’ for love in all the wrong places, and hoping for a little lunar inspiration; “There’s a restless moon out tonight, in a lonely sky with a lonely light/Do you think it feels the way I do, nothin’ could feel as lonely as I feel for you.” On the break, finger-picked guitar riffs lock into a prickly pas de deux with some high lonesome pedal steel.

“Trouble On My Mind” is a CowPunk-tastic thrasher that’s bashed out at full-throttle. Crashing guitars collide with whip-smart bass lines and a walloping backbeat. Jenny’s vocals are equal parts yodel and growl as lyrics school a wayward swain; “I wanna go back to the time before I heard you say that you know that we could be alright if I would only stay, but I’ve got that fiery, boiling blood, gets hotter every day.” A scorching guitar solo is unleashed on the break bookended by singed bass runs and a combustible beat.

Conversely, “Friday Night” exhibits a surprisingly tender side. This swoony ballad is the aural equivalent of a be-spangled Nudie Suit. The melody, which lands somewhere between “Walking After Midnight” and the Depression era chestnut, “Dancing With Tears In My Eyes,” is embroidered with courtly Spanish guitar, threading bass and a clip-clop gait. Something of a Wallflower’s lament, it features this yearning couplet; “It’s Friday night again, you’re somewhere fun with your friends, I close my eyes and picture it, you’re leaning in now to give me a kiss.” A gossamer-soft solo unfurls on the break underscoring the heartache.

Meanwhile, on “Be The Only One” shang-a-lang Surf guitar is matched by brawny bass lines and a stutter-y big beat. Once again, Jenny takes a faithless fucker to task, declaring “I wanna be the only one that you’re crying for, I wanna be the only one who makes you rock n’ roll.” Reverb-drenched guitars get muscled aside as a rippling solo hangs 10 on the break. The song builds to a cogent crescendo before downsizing to a single throbbing power chord.

On a record stacked with stellar tracks three stand out. “Train Ticket” is powered by ricocheting guitar riffs, bass lines that don’t walk, but run and a rollicking locomotive rhythm. Jenny’s yelpy vocals ride roughshod over lyrics that chronicle the ups and downs of a hot-headed couple who can’t live together but can’t be apart; “No matter what I try I just can’t believe that it’s really this hard to keep a man happy, I know I don’t cook and I sure don’t clean, but I’ve got good rhythm and I know how to sing, got a train ticket in his hand, leavin’ this little baby on her own again.” Rapid-fire riff-age connects with speedy pedal steel on the break before a romantic rapprochement is reached; “We go together like water and grease, but you can’t change love, you’re the one I need, and one of these days you’re going to feel lucky.”

Lonesome and lovesick, “California Cowboy” is a twangy cha-cha-cha. Spangly guitars, wily pedal steel and rattle-trap bass are wed to a tumbling tumbleweed beat. Lyrics find this conflicted Cowgirl pining for a Sunshine state vaquero, but pretending otherwise; “I don’t want no California cowboy chasing the sun, tellin’ me that I’m the one he wants, then saying I’m just not the one he loves/I don’t want no California cowboy riding the waves, building me up to let me down, then leavin’ me with my head in the clouds.” Even the fuzz-crusted solo, accented by twitchy bass lines and a tick-tock beat, indicates the lady doth protest too much.

Finally, “She’s Not The One” is a bit of a barn-burner. Fleet and filigreed fretwork, serpentine bass lines, slivery pedal steel and a jungle tom-tom backbeat belie supplicating lyrics of a woman scorned. Rather than take a page from Kitty Wells or Loretta Lynn’s defiant playbook, she attempts to turn the other cheek; “I wish that you could see the light and in turn you’d realize it doesn’t matter who comes through no one will love you like I do/I’ll love you till the day I die and I’ll cry every single night, hopin that you come back soon since I’m the only one for you.”

Other interesting songs include the shimmery Grand Ol’ Opry quick-step of “Foolish Lies” and a sultry take on Bonnie Guitar’s classic Country weeper, “Johnny Vagabond.” The album closes with “Queen Of The Desert.” Slashing guitars and loping bass lines are tethered to a galloping beat. The lyrics paint a vivid and affectionate portrait of a hardscrabble landscape that serves as an arid monarchy; “Riding through the desert I’m the Queen of all see, queen of the dust and the flies buzzin’ round me/I’m Queen of all the cactus and the sun that shines so bright, Queen of all the Rattlesnakes and Queen of the Rattlesnake bite, and as I howl with the Coyotes, this desert song is the song I sing.” An extended instrumental coda, where guitars phase, flange, and finger-pick over gilded pedal steel, barbed-wire bass and kinetic kick-drum, allows the band to gracefully ride into the sunset.

Jenny and the Spurs survived several setbacks during the making of this record. As tracking began, Jenny endured some vocal cord surgery. Following a bit of rehabilitation, the band returned to the studio, only to discover songs recorded on a hard drive had cataclysmically crashed, forcing them to start over from scratch. Things moved along at a pretty steady clip until a ruptured water heater flooded the studio. After the space was gutted and rebuilt, everything was back on track when the pandemic hit.

Happily, none of that tsuris is evident here. Fire On The Ridge is playful and clever. The record swaggers with authority, offering up a potent combo-platter of Country, Rockabilly and Punk.